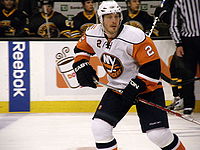 The New York Islanders are an American professional ice hockey team based in Uniondale, Long Island, New York. They are members of the Atlantic Division of the Eastern Conference in the National Hockey League (NHL). The Islanders arrived in Uniondale in 1972, and play their home games at the Nassau Veterans Memorial Coliseum.

The franchise has had 13 team captains in its history. Ed Westfall, the team's first, won the Bill Masterton Trophy during his Islanders captaincy;[1] Michael Peca, who won the Frank J. Selke Trophy after the 2001–02 season, and Doug Weight, who won the King Clancy Trophy after the 2010-11 season, are the only other captains to have won an award during their terms.[2][3] Denis Potvin had the longest captaincy, from 1979 through 1987, during which he played 521 regular season games.[4] Bryan McCabe served the shortest length of time—56 regular season games over one season.[5] Just prior to the start of the 2011-12 season, the Islanders named Mark Streit their 13th team captain, the first Swiss-born captain in NHL history.[6]

The Islanders did not assign a new captain for the 1996–97 season after previous captain, Patrick Flatley, was released from his contract.[7] The Islanders also didn't name a captain for the 2000–01 season, for unknown reasons. Despite the 2004–05 NHL Lockout, Michael Peca's term as captain was still valid.[8] Though allowed in the NHL, the Islanders have never given a goaltender the captaincy. There have been only three Islanders' players to hold the captaincy for a single season—Bryan McCabe, Trevor Linden, and Kenny Jonsson—none of whom made it to the playoffs during their term.[5][9][10] 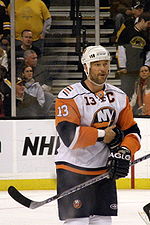