The New York Cosmos (pronounced /ˈkɒzmoʊs/) are an American soccer club based in New York City. The team was formed in August 2010 by a consortium led by English businessman Paul Kemsley, and aspires to become a franchise of Major League Soccer, the top professional soccer league in the United States of America and Canada. The Cosmos are named after and claim lineage from the original New York Cosmos club, which was active from 1971 to 1985.

The original New York Cosmos club, active from 1971 to 1985, was the strongest franchise in the North American Soccer League (NASL), both financially and competitively. At its height, it featured in its line-ups some of the most famous players in the world, including the Brazilian star Pelé, but soon after his retirement in 1977 both the club and the league fell into decline. The NASL and the Cosmos were dissolved in 1984 and 1985 respectively.

After the Cosmos folded, the team's last general manager, G. Peppe Pinton, continued to run and operate the club's youth camps, which had started in 1977.[4] With the rise of Major League Soccer (MLS) during the late 1990s and 2000s, various New York City area entities approached Pinton about using the name for an MLS franchise. The existing franchise in New York, the MetroStars, made relevant enquires both before and after becoming the New York Red Bulls in 2006.[5] Pinton was reluctant to let the name be used by an MLS team, believing that the league was unwilling to respect the Cosmos' heritage;[6] however, after seeing MLS reintroduce historical NASL names, he changed his mind. The London Daily Mail reported in late August 2009 that Pinton had sold the name and image rights to Paul Kemsley, the former vice-chairman of English Premier League club Tottenham Hotspur,[5][7][8] who headed a group intent on establishing a new Cosmos team in MLS. Pelé announced the club's return as the group's honorary president on August 1, 2010.[2]

The Cosmos' first match was on August 5, 2011, when they played against Manchester United at Old Trafford in Paul Scholes's testimonial match. Cantona managed a team mixing members of the Cosmos under-23 team with guest players from around the world.[11][12][13]

The departure of Kemsley as chairman and CEO was announced by the Cosmos on October 26, 2011, with an official club statement saying that he wished "to pursue other interests and commitments". His replacement was not immediately announced – according to the press release, the new chairman and CEO "will be announced in the coming months".[14] A further press release on November 2 gave news of a company buyout, restructuring and various unspecified management changes within the organization. The statement also said that the goal of the club remained the same under its new, unidentified owners – "unequivocally" to become an MLS team.[15] 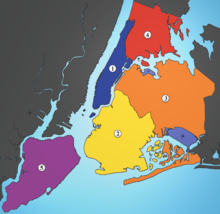 At the time of the Cosmos' return in 2010, MLS was made up of 16 franchises, with three new teams set to join over the following two seasons: the Vancouver Whitecaps and Portland Timbers in 2011, and the Montreal Impact in 2012. The earliest a 20th franchise could potentially join MLS would be in 2013.[16] Newsday reported in late April 2011 that the league was committed to placing the next franchise in the New York borough of Queens if a deal could be reached.[17] According to Terry Byrne, speaking on July 28, 2011, the stadium is the biggest factor regarding the Cosmos' accession to MLS. "The league wants us to demonstrate that we are capable of taking a stadium [area] and building a stadium," he said. "We have to be fully prepared to pull the trigger on an all singing and dancing stadium."[18]

Working alongside New York Mayor Michael Bloomberg, the Cosmos are specifically seeking a location within New York City's boroughs rather than outside in a suburb (this would distinguish them from the Red Bulls, who play in Harrison, New Jersey). Over a dozen locations around Queens, The Bronx and Manhattan were marked out in March 2011,[18][19] narrowed down to four sites by the end of July; two in Queens and one each in Brooklyn and "uptown" Manhattan.[18]

Apart from the stadium, an issue regarding MLS membership is the franchise fee that the Cosmos would have to pay to the league. When the club first announced its intention to join, the price stood at $40 million, but by the end of July 2011 the fee for any expansion team playing in New York had risen to $70 million, a 57% rise from the entry price paid by Montreal. The club and league remain in negotiations, which include talks over perhaps starting play at a temporary home stadium for "two or three years".[20] Byrne told Goal.com on July 28 that he expected a decision from MLS commissioner Don Garber "within the next six to eight months".[18]

The Cosmos' main supporters group is the Borough Boys Supporters Club, a group originally formed in 2007 to lobby for the creation of a professional soccer team based in New York City. The members first met in October 2007 and decided on the name "Borough Boys" on November 17, 2007, after holding a vote. The club's original motivation was simply the desire for professional soccer in the city, and to that end it held talks with city officials in early 2008. Soon after Kemsley's group bought the Cosmos rights in late 2009, the club wrote an open letter asking him to create an MLS franchise within the city; he reacted positively, leading the Borough Boys to pledge their support. The Borough Boys have since maintained a close relationship with the Cosmos.[19][21]

The supporters club is presently made up of around 1,000 members, and represents a broad spectrum of fans from many different backgrounds.[22] The Borough Boys' original logo used the colours of New York City – white, blue and orange – and was based around the arches of the Brooklyn Bridge; it also used the motto of Brooklyn, Eendraght Maeckt Maght, which translates from Dutch as "Unity makes strength".[22] After the club became affiliated with the Cosmos, it adopted a new emblem featuring a navy blue skull, seen in profile facing to the left, surrounded by green, yellow and blue "blades" similar to those on the Cosmos badge.[21][22]

The Cosmos roster for the team's first game, against Manchester United on August 5, 2011, was made up of twelve guest players and eight from the Cosmos' under-23 team.[23]

Players are retired or unsigned unless specified otherwise. Clubs given as of date of game, August 5, 2011

Players from Cosmos U-23

The original Cosmos team retired Pelé's number 10 jersey in 1977.[25] On formation, the new club announced that it would continue this tradition.[23]

The club operates the Cosmos Academy, which it formed on foundation in August 2010. The academy, affiliated with Blau Weiss Gottschee and based in Queens, New York, is led by Giovanni Savarese and Ted Chronopoulos. It competes at various levels of the U.S. Soccer Development Academy, fielding teams in the under-9 to under-18 age groups.[28] The US under-17 team's Spring 2011 roster included three players from the Cosmos Academy, more than any MLS team.[29][30]

A western division called Cosmos Academy West existed between August 2010 and August 2011, based in Pomona, California, about 27 miles (43 km) east of Los Angeles.[note 3] At the end of 2010, it was ranked by Soccer America as the third best boys' club in the United States and the top boys' club in California.[32][33] Six months after its original partnership with Los Angeles Futbol Club was terminated in February 2011,[31][32][34] Cosmos Academy West disbanded in August 2011, its operations folded into those of MLS club Chivas USA.[35] This was done so that the Cosmos would fit more closely the requirements of a potential MLS team based out of New York City.[36]

As part of the deal made with the Cosmos in 2010, Blau Weiss Gottschee were to receive payment from New York in January and August each year. After the first two bi-annual payments were made on time, an unspecified amount was still outstanding from the third three months after its due date on August 1, 2011, causing Blau Weiss Gottschee to file suit for non-payment against the Cosmos on November 8, 2011. Because of the lack of funding, Blau Weiss was forced to restore the tuition, transport and training fees which players had been required to pay before the 2010 deal, but which had been thereafter covered by the Cosmos sponsorship. The Blau Weiss statement did not reveal the court in which the claim will be pressed.[37]

An under-23 Cosmos side has been accepted into the USL Premier Development League (PDL), the fourth tier of the United States soccer pyramid, and is expected to officially join for the 2012 season. During 2011, the under-23s' schedule is made up of exhibition matches against existing PDL clubs. The team plays its home matches at Monsignor Farrell High School, Staten Island, and is coached by Savarese.[38]