State and federal agencies are planning to replace the Governor Malcolm Wilson Tappan Zee Bridge over New York's Hudson River. Construction is anticipated to begin in 2013, with opening targeted for 2017.

The original Tappan Zee is a cantilever bridge built during 1952-1955. Three miles long, the bridge spans the Hudson at its second widest point. The Tappan Zee river crossing was named by 17th century Dutch settlers. The "Tappan" are believed to be a Native American tribe formerly living in the area; zee is the Dutch word for "sea".[1] The Tappan Zee is the only bridge serving a 33-mile stretch of river that passes through New York City's populous northern suburbs. 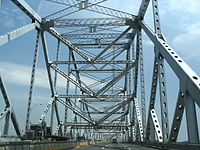 The original Tappan Zee was built in a period of material shortages during the Korean War.

The deteriorating current structure bears an average of 138,000 vehicles per day, substantially more traffic than its designed capacity. During its first decade, the bridge carried fewer than 40,000 vehicles per day. Part of the justification for replacing the bridge stems from its construction during Korean War material shortages. Unlike other major bridges in metropolitan New York, the Tappan Zee was designed to last only 50 years.[2]

The collapse of Minnesota's I-35W Mississippi River bridge in 2007 raised worries about the Tappan Zee's structural integrity.[3] These concerns, together with traffic overcapacity and increased maintenance costs, escalated the serious discussions already ongoing about replacing the Tappan Zee with a tunnel or a new bridge.[4][5] Six options were identified and submitted for project study and environmental review.[6]

The Federal Highway Administration issued a report in October 2011 designating the Tappan Zee's replacement to be a dual-span twin bridge. The new bridge will be built on the north side of the old Tappan Zee, connecting to the existing highway approaches on both river banks.[7] Current plans and anticipated federal funding would allow construction to begin in 2013, with completion targeted for 2017. Project costs are estimated at $5.2 billion.[8]

Like the original, New Tappan Zee will be a toll bridge administered by the New York State Thruway Authority. The authority is project co-sponsor, along with the state Department of Transportation.

As proposed[7], the new bridge will include

Infrastructure for "future transit modes", such as a potential new commuter rail link, is anticipated to occupy the planned 42-foot gap between the dual spans. The bridge plan includes as an objective, "Providing a crossing that does not preclude future trans-Hudson transit services."[7]

The New York Metropolitan Transportation Authority is studying expansion possibilities for Rockland County on the bridge's western approach. These plans could use the new bridge for direct service into Manhattan via the Metro-North Hudson Line, which runs along the Hudson River's east bank.