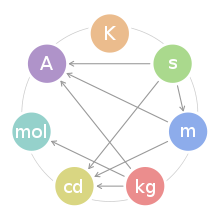 A committee of the International Committee for Weights and Measures (CIPM) has proposed revised formal definitions of the SI base units, which are being examined by the CIPM and which may be considered by the 25th CGPM, in 2014.

The last major overhaul of the metric system was in 1960 when the International System of Units (SI) was formally published as a coherent set of units of measure. SI is structured around seven base units that have apparently "arbitrary" definitions and another twenty units that are derived from these base units. Although the units themselves form a coherent system, the definitions do not. The proposals before the CIPM seek to remedy this by using the fundamental quantities of nature as the basis for deriving the base units. This will mean, amongst other things, archiving the prototype kilogram. The second and the metre are already defined in such a manner.

There have been numerous criticisms of the revised definitions since their initial proposal, and it has been argued that the proposal for the new SI requires frank and open discussion before decisions are made.

Background to the proposal of new SI definitions

In 1875, twenty of the most industrially developed nations of the world met for the Convention of the Metre. The result was the signing of the Treaty of the Metre under which three bodies were set up to regulate units of measure that were to be used internationally. They were:

Since 1960, when the definition of the metre was linked to a particular wavelength of light rather than the international prototype metre, the only unit of measure that has been dependent on a particular artifact has been the kilogram. Over the years, small drifts which could be as high as 20×10−9 kilograms per annum in the mass of the international prototype kilogram have been detected.[2] At the 21st meeting of the GCPM (1999), national laboratories were urged to investigate ways of breaking the link between the kilogram and a specific artifact.

A report published in 2007 by the Consultative Committee for Thermometry to the CIPM noted that their current definition of temperature has proved to be unsatisfactory for temperatures below 20 K and for temperatures above 1300 K. The committee was of the view that the Boltzmann constant provided a better basis for temperature measurement than did the triple point of water, as it overcame these difficulties.[3]

At its 23rd meeting (2007), the GCPM mandated the CIPM to investigate the use of natural constants as the basis for all units of measure rather than the artifacts that were then in use. The following year this was endorsed by the International Union of Pure and Applied Physics (IUPAP).[4] At a meeting of the CCU held in Reading, United Kingdom in September 2010, a resolution[5] and draft changes to the SI brochure that were to be presented to the next meeting of the CIPM in October 2010 were agreed to in principle.[6] The CIPM meeting of October 2010 found that "the conditions set by the General Conference at its 23rd meeting have not yet been fully met. For this reason the CIPM does not propose a revision of the SI at the present time";[7] however the CIPM presented a resolution for consideration at the 24th CGPM (17 - 21 October 2011) to agree the new definitions in principle, but not to implement them until the details have been finalised.[8] This resolution was accepted by the conference[9] and in addition the CGPM moved the date of the 25th meeting forward from 2015 to 2014.[10]

In this section, an "X" at the end of a number means that the final digit is yet to be agreed upon.

The CCU has proposed that in addition to the speed of light, four constants of nature be defined to have exact values:

These constants were described in the 2006 version of the SI manual; the latter three were defined as "constants to be obtained by experiment".

It is proposed that the following constants of nature be retained unchanged:

The seven definitions above are rewritten below after converting the derived units (joule, coulomb, hertz, lumen and watt) into the seven base units (second, metre, kilogram, ampere, kelvin, mole and candela). In the list that follows, the symbol sr stands for the dimensionless unit steradian.

In addition the CCU has proposed that:

These changes will have the effect of redefining the SI base units, though the definitions of the derived SI units will remain the same.

Proposed changes to the base units

It is proposed that the text of the definitions of all the base units be either refined or rewritten. The current (2008) and proposed (2011)[6] definitions are given below. In many cases the final digit of any constant is yet to be agreed, so it has been represented by an "X" 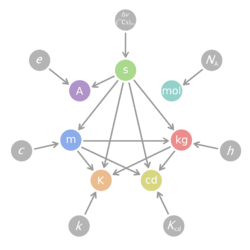 Relations between proposed SI units definitions (in color) and with seven fundamental constants of nature (in grey) with fixed numerical values in the proposed system.

The proposed definition is effectively the same as the current definition, the only difference being that the conditions under which the measurements are made more rigorous.

Current definition: The second is the duration of 9192631770 periods of the radiation corresponding to the transition between the two hyperfine levels of the ground state of the caesium-133 atom.

Proposed definition: The second, s, is the unit of time; its magnitude is set by fixing the numerical value of the ground state hyperfine splitting frequency of the caesium-133 atom, at rest and at a temperature of 0 K, to be equal to exactly 9192631770 when it is expressed in the unit s−1, which is equal to Hz.

The proposed definition is effectively the same as the current definition, the only difference being that the tightening up of the definition of the second will propagate to the metre

Current definition: The metre is the length of the path travelled by light in vacuum during a time interval of 1/299792458 of a second.

Proposed definition: The metre, m, is the unit of length; its magnitude is set by fixing the numerical value of the speed of light in vacuum to be equal to exactly 299792458 when it is expressed in the unit m·s−1.

The definition of the kilogram is undergoing a fundamental change - the current definition defines the kilogram as being the mass of the international prototype kilogram, the new definition relates it to the equivalent energy of a photon via Planck's constant.

Current definition: The kilogram is the unit of mass; it is equal to the mass of the international prototype of the kilogram.

Proposed definition: The kilogram, kg, is the unit of mass; its magnitude is set by fixing the numerical value of the Planck constant to be equal to exactly 6.62606X×10−34 when it is expressed in the unit s−1·m2·kg, which is equal to J·s.

The definition of the ampere is undergoing a major overhaul—the current definition, which is difficult to realise with high precision in practice, is being replaced by a definition which is more intuitive and which is easier to realise in practice.

Current definition: The ampere is that constant current which, if maintained in two straight parallel conductors of infinite length, of negligible circular cross-section, and placed 1 m apart in vacuum, would produce between these conductors a force equal to 2×10−7 newton per metre of length.

Proposed definition: The ampere, A, is the unit of electric current; its magnitude is set by fixing the numerical value of the elementary charge to be equal to exactly 1.60217X×10−19 when it is expressed in the unit A·s, which is equal to C.

One consequence of this change is that the new definition of the Ampere will not be dependent on the definitions of the kilogram and the metre. In addition, by fixing the elementary charge to an exact value, the vacuum permeability, vacuum permittivity and impedance of free space, which are currently exact along with the speed of light, will all consequently carry experimental error.

The definition of the kelvin will undergo a fundamental change if the proposals are accepted. Rather than using points where water changes state to fix the temperature scale the proposal recommends that the energy equivalent as given by Boltzmann's equation be used.

Proposed definition: The kelvin, K, is the unit of thermodynamic temperature; its magnitude is set by fixing the numerical value of the Boltzmann constant to be equal to exactly 1.38065X×10−23 when it is expressed in the unit s−2·m2·kg K−1, which is equal to J·K−1.

The current definition of the mole links it to the kilogram. The proposed definition will break that link by making a mole a specific number of entities of the substance in question.

Proposed definition: The mole, mol, is the unit of amount of substance of a specified elementary entity, which may be an atom, molecule, ion, electron, any other particle or a specified group of such particles; its magnitude is set by fixing the numerical value of the Avogadro constant to be equal to exactly 6.02214X×1023 when it is expressed in the unit mol−1.

One consequence of this change is that the current defined relationship between the mass of the 12C atom, the dalton, the kilogram, and Avogadro's number will no longer be valid. One of the following must change:

The proposed definition is effectively the same as the current definition, but rephrased.

Current definition: The candela is the luminous intensity, in a given direction, of a source that emits monochromatic radiation of frequency 540×1012 Hz and that has a radiant intensity in that direction of 1/683 watt per steradian.

Proposed definition: The candela, cd, is the unit of luminous intensity in a given direction; its magnitude is set by fixing the numerical value of the luminous efficacy of monochromatic radiation of frequency 540×1012 Hz to be equal to exactly 683 when it is expressed in the unit s3·m−2·kg−1·cd·sr, or cd·sr·W−1, which is equal to lm·W−1.

Overall the changes in the definitions will give an improvement in the uncertainty of the reproduction of the base units using the standard mise en pratique (practical technique).

The following table catalogues the improvements:[6][11]

Price[13] has argued that the new proposal will:

Leonard[14] has argued that "the fundamental concept of the mole requires the number of entities comprising one mole, i.e. Avogadro's number, to be exactly equal to the gram-to-dalton mass ratio" and that the proposal breaks this compatibility condition by defining the kilogram, dalton and mole independently.

Pavese[15] has argued that a number of issues need to be better understood before the definitions are changed. The issues include the count nature and the value of the Avogadro number; the loss of the concept of base unit; the possibility of checking future changes in the 'fundamental constants', and the shift to the unit of the experimental uncertainty.