The New North Main Line or NNML is a currently little-used railway line about eleven miles long in north-west London.

It opened in 1903 as part of a joint project by the Great Central Railway (GCR) and the Great Western Railway (GWR) to improve their access from London to the midlands and north of England, especially relative to the London and North Western Railway (LNWR) route. It begins at Old Oak Junction on the Great Western Main Line from Paddington and runs via Greenford to join what is now the Chiltern Main Line at Northolt Junction, south-east of South Ruislip.

The line joined the Great Western and Great Central Joint Railway between Denham station and West Ruislip in 1906. Its original name was "Denham - Junction for Uxbridge" as it was planned to be a stop on the shuttle service between Gerrards Cross and Uxbridge High Street. The latter was closed in 1964 and later demolished.

Since 1948 the West Ruislip branch of the London Underground Central line has run alongside it.

In the past it carried many trains to the north-west, and it was heavily used in the 1960s when electrification work restricted capacity on the West Coast Main Line (WCML); but when that project was completed, express services from London to Birmingham on the GWR/GCR route were discontinued as part of the Beeching Axe. All local trains on the route were diverted to Marylebone via Sudbury in 1963, and Greenford station on the New North Main Line was closed.

In the early 1990s the New North route was singled between Old Oak Common and Park Royal and between Greenford and South Ruislip. No improvement work has been carried out on the line since that date.

Chiltern Railways operates a token Paddington service on weekdays; in some timetable revisions it has been one up or one down train, or one of each way between Gerrards Cross and Paddington via West Ruislip.[1] The line is still used for Goods trains carrying refuse from London and for empty coaching stock movements, and it has exceptionally been a diversionary route when the normal lines to Marylebone or Paddington have been closed.

For operational reasons such as balancing wheel wear, trains including those of Heathrow Express which were affected by tight track at Heathrow Junction have been turned using the London end of the NNML, its triangular junction with the Greenford Branch Line and the GWML through Ealing. At weekends in 2008 when major engineering works were taking place on the WCML, it was also used by Virgin Trains' Euston-Birmingham International "Blockade Buster" service, which ran from Euston via Willesden, Acton Main Line, Ealing Broadway, Greenford, High Wycombe, Banbury and Coventry using pairs of 5-car Voyager sets. On two Sundays in February 2010, Chiltern and Wrexham & Shropshire trains were diverted to Paddington via the line while engineering work blocked the route to Marylebone. This happened again between Monday 15th and Friday 19th of August 2011.

The route is also used for testing out new trains and for the training of new drivers.

The line is now officially known as the Acton-Northolt Line and carries the Engineer's Line Reference code of ANL.[2] 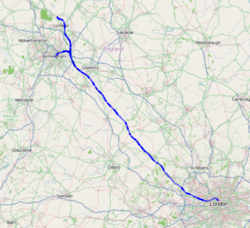 Approximate route of the London-Birmingham section based on the official description, also available as KML.

The route proposed for High Speed 2 to leave London would make use of the NNML formation.[3] A station is also proposed on it, provisionally known as 'Crossrail interchange', for connections between the proposed high-speed line and Crossrail.

As proposed in March 2010, the line would run from London Euston, mainly in tunnel, to an interchange with Crossrail, west of Paddington, thence along the New North Main Line (Acton-Northolt Line) past West Ruislip and alongside the Chiltern Main Line before striking out on a new formation of its own.[4]

The line's former stations and sidings

An image of the abandoned grey concrete stairwell to the London side platform at the old Ruislip Gardens station. It is in the bushes, behind the tree and above the former station's culvert drain (the gray concrete structure). Until recently the entrance remained in situ at platform level.

The tracks through the station were laid by the Great Western and Great Central Joint Railway with services starting on 2 April 1906, although there was no station at Ruislip Gardens at that time. The station opened on 9 July 1934.[5]

As part of the 1935-40 New Works Programme, Central line services were projected westwards from a new junction, west of North Acton on the line to Ealing Broadway. The original intention was to extend the service as far as Denham, but work was delayed by the Second World War and the terminus of the extension was cut back to West Ruislip, with services starting on 21 November 1948.[5]

Main-line services calling at Ruislip Gardens ceased in 1958 and the station closed, leaving only the Central Line services in operation. Until recently the entrance to a passenger stairwell was visible on the London-bound side of the Chiltern tracks.

These served several local businesses and were used to store spare British Rail and/or London Underground stock on occasion too. They were abandoned in the early 1990s.

The Great Western Railway built a halt here named Northolt Halt in 1907, on the New North Main Line to Birmingham. It was renamed Northolt (for West End) Halt, before gaining station status under its original shorter name. It was closed in 1948 when the Central line was extended on a new pair of tracks from North Acton, the current Northolt tube station opening on 21 November 1948.[5] The opening had been planned to be in the 1930s but was delayed by World War II.

A 1914 Railway Clearing House map of railways in the vicinity of Greenford.

The old GWR era Greenford station in 2001. The forecourt of the surviving platform and part of the platform itself are now built upon by a 1990s business park.

Some semaphore signals at Greenford station in 2002.

The original Greenford station was opened by the Great Western Railway on 1 October 1904 on the New North Main Line.[5]

The present station, adjacent to the original, was built as part of the Central line extension of the 1935-40 New Works Programme of the London Passenger Transport Board. It opened on 30 June 1947 after delay due to the Second World War.[5] Service at the original station was gradually reduced and it was closed in 1963.

These served several local businesses, but were closed in the 1990s.

These served the local Royal Mail distribution centre and sorting office, but were closed in the early 2000s.

The Great Western Railway opened "Perivale Halt" on 2 May 1904. It closed on 15 June 1947, after the extension of the Central Line to Ruislip. It had long wooden platforms and pagoda huts, on an embankment reached by sloping paths west of Horsenden Lane South. The steam "push-and-pull" passenger service ran to Bishop's Bridge Paddington; the line (the last main-line to be built) was shared with freight and with express trains to Birmingham (2 hours non-stop). Until the late 1920s, Perivale was entirely rural, despite its proximity to Ealing.

A Lens of Sutton photograph of the station can be seen on page 77 of The forgotten Stations of Greater London by J.E. Connor and B.L. Halford (Connor and Butler) (ISBN 0947699 17 1). There was a similar halt at South Greenford before it was modernised by Network SouthEast.

The current London Underground station was opened on 30 June 1947.

The Sanderson & Son's sidings[6] have long since closed.

The Great Western Railway (GWR) opened Twyford Abbey Halt just east of the site on 1 May 1904 as part of the GWR and Great Central Railway Joint Railway project (the New North Main Line) towards High Wycombe. It was closed on 1 May 1911, replaced by Brentham station, later renamed "Brentham (for North Ealing)", to the west of the present location. That station was closed between 1915 and 1920 due to World War I economies. Brentham and most main-line stations between North Acton and West Ruislip were finally closed in 1947 when the Central line was extended from North Acton on electrified tracks built under the LTPB New Works Programme of 1935, the delay being due to World War II. The Central line station opened on 30 June 1947 as "Hanger Lane" as it was near that road.

These few sidings were used by both London Underground and local businesses. They have now been mostly removed and the remaining one was heavily overgrown as of 2008.

A derelict permanent way hut south of the former location of the now closed Park Royal West Halt in 2002.

These served the now demolished local Guinness plant, but were closed by the early 1990s.

Three possible transport services have been proposed for the area; the West London Orbital, Fastbus and the North and West London Light railway.[8][9][10]

In 2004, the multinational company Diageo agreed to build extra Central Line platforms at Park Royal tube station, as part of its First Central business park, built on the site of the former Guinness brewery. As of 2010, this had not yet happened.

The British Can Co.'s siding.[6] Long since closed.

They both served the Marcon Topmix stone works, but were mothballed in the late 2000s.

The NNML line at Acton Town in 2001. It has now been reduced to freight and diversionary services.

The joint New North Main Line (NNML) of the Great Central and Great Western opened in 1903, and its North Acton railway station followed in 1904.

The Central London Railway (the precursor of the Central line) opened its adjoining North Acton station in 1923 on its 1920 extension to Ealing Broadway. As Transport for London explains:[11]

North of the Central line tracks were two freight lines, removed in the 1960s, running alongside the Central line as far as White City. To the north of those at a slightly higher level were the two tracks of the NNML. The footbridge to the NNML platforms is on the extreme left of this 1933 photograph.[12]

The NNML platforms closed when the Central line was extended on new track from North Acton to Greenford station in 1947. Between South Ruislip station and Old Oak Junction, the GWR line was progressively run down, and in many places it is now single-track, including the stretch running past the tube station. By May 2008 only freight trains and a token, once daily, passenger service provided by Chiltern Railways used this stretch of line.

Old Oak Lane Halt railway station was opened by the Great Western Railway in 1906 within the complex of lines at the south east end of the New North Main Line, a location with low potential for passenger traffic. It closed in 1947 without a replacement when the Central line of London Underground was extended from North Acton to West Ruislip alongside the NNML under the 1935-1940 New Works Programme delayed by World War II.