Chameleons (family Chamaeleonidae) are a distinctive and highly specialized clade of lizards. They are distinguished by their parrot-like zygodactylous feet, their separately mobile and stereoscopic eyes, their very long, highly modified, and rapidly extrudable tongues, their swaying gait, the possession by many of a prehensile tail, crests or horns on their distinctively shaped heads, and the ability of some to change color. Uniquely adapted for climbing and visual hunting, the approximately 160 species of chameleon range from Africa, Madagascar, Spain and Portugal, across south Asia, to Sri Lanka, have been introduced to Hawaii, California and Florida, and are found in warm habitats that vary from rain forest to desert conditions.

The oldest known chameleon fossil is that of Chamaeleo caroliquarti, found in Europe and dated to about 26 mya. However the chameleons are probably far older than that, perhaps sharing a common ancestor with iguanids and agamids more than 100 mya (agamids being more closely related). Fossil evidence has also been found in Africa and Asia, and suggests that chameleons were once more widespread than they are today. They may have their origins in Madagascar, which today is home to nearly half of all the 150 or more known species in this family, and later dispersed to other areas.[2] Monophyly of the family is supported by several studies. 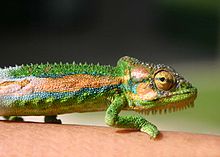 Chameleons vary greatly in size and body structure, with maximum total length varying from 3.3 cm (1.3 in.) in Brookesia minima (one of the world's smallest reptiles) to 68.5 cm (27 in.) in the male Furcifer oustaleti.[3] Many have head or facial ornamentation, such as nasal protrusions, or horn-like projections in the case of Trioceros jacksonii, or large crests on top of their head, like Chamaeleo calyptratus. Many species are sexually dimorphic, and males are typically much more ornamented than the female chameleons. Chameleons are often sold at pet stores and are not rare to have as household pets. Below is a table of common pet chameleons:

Chameleon species have in common their foot structure, eyes, tongues and a lack of ears. 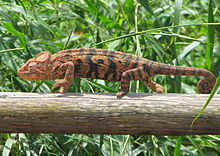 Chameleons are didactyl: on each foot the five toes are fused into a group of two and a group of three, giving the foot a tongs-like appearance. These specialized feet allow chameleons to grip tightly to narrow branches. Each toe is equipped with a sharp claw to gain traction on surfaces such as bark when climbing. The claws make it easy to see how many toes are fused into each part of the foot — two toes on the outside of each front foot and three on the inside.

Their eyes are the most distinctive among the reptiles. The upper and lower eyelids are joined, with only a pinhole large enough for the pupil to see through. They can rotate and focus separately to observe two different objects simultaneously, this lets their eyes move independently from each other. It in effect gives them a full 360-degree arc of vision around their body. When prey is located, both eyes can be focused in the same direction, giving sharp stereoscopic vision and depth perception. They have very good eyesight for reptiles, letting them see small insects from a long (5–10 m) distance.

They lack a vomeronasal organ. Also, like snakes, they do not have an outer or a middle ear. This suggests that chameleons might be deaf, although snakes can sense vibration using a bone called the quadrate. Furthermore, some or maybe all chameleons, can communicate via vibrations that travel through solid substrates such as branches.

Chameleons have very long tongues (sometimes longer than their own body length) which they are capable of rapidly extending out of the mouth.

The tongue extends out faster than human eyes can follow, at around 26 body lengths per second. The tongue hits the prey in about 30 thousandths of a second.[4] The tongue of the chameleon is a complex arrangement of bone, muscle and sinew. At the base of the tongue there is a bone and this is shot forward giving the tongue the initial momentum it needs to reach the prey quickly. At the tip of the elastic tongue there is a muscular, club-like structure covered in thick mucus that forms a suction cup.[5] Once the tip sticks to a prey item, it is drawn quickly back into the mouth, where the chameleon's strong jaws crush it and it is consumed. Ultraviolet light is part of the visible spectrum for chameleons.[6] Chameleons exposed to ultraviolet light show increased social behavior and activity levels, are more inclined to bask and feed and are also more likely to reproduce as it has a positive effect on the pineal gland. 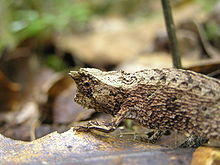 Chameleons are primarily found in the mainland of sub-Saharan Africa and on the island of Madagascar, although a few species are also found in northern Africa, southern Europe, the Middle East, southern India, Sri Lanka and several smaller islands in the western Indian Ocean. There are introduced, feral populations of veiled and Jackson's chameleons in Hawaii and isolated pockets of feral Jackson's chameleons have been reported in California and Florida.

Chameleons inhabit all kinds of tropical and mountain rain forests, savannas and sometimes deserts and steppes. The typical chameleons from the subfamily Chamaeleoninae are arboreal and usually found in trees or bushes, although a few (notably the Namaqua Chameleon) are partially or largely terrestrial. Most species from the subfamily Brookesiinae, which includes the genera Brookesia, Rieppeleon and Rhampholeon, live low in vegetation or on the ground among leaf litter. 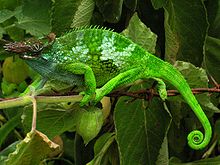 Chameleons are mostly oviparous, some being ovoviviparous.

The oviparous species lay eggs 3–6 weeks after copulation. The female will climb down to the ground and begin digging a hole, anywhere from 10–30 cm (4–12 in.) deep depending on the species. The female turns herself around at the bottom of the hole and deposits her eggs. Once finished, the female buries lina[clarification needed] and leaves the nesting site. Clutch sizes vary greatly with species. Small Brookesia species may only lay 2–4 eggs, while large Veiled Chameleons (Chamaeleo calyptratus) have been known to lay clutches of 80–100 eggs. Clutch sizes can also vary greatly among the same species. Eggs generally hatch after 4–12 months, again depending on species. The eggs of Parson's Chameleon (Calumma parsonii), a species which is rare in captivity, are believed to take upwards of 24 months to hatch.

The ovoviviparous species, such as the Jackson's Chameleon (Trioceros jacksonii) have a 5–6 month gestation period. The newborn are in a transparent membrane and they are still sleeping, once they touch the ground or branch, they will wake up and attempt to crawl out of the membrane.[citation needed] The female can have 8–31 live young at once.

Chameleons generally eat locusts, mantis, crickets, grasshopper and other insects, but larger chameleons have been known to eat small birds and other lizards. A few species, such as Jackson's Chameleon (T. jacksonii) and the Veiled Chameleon (C. calyptratus) will consume small amounts of plant matter. Chameleons prefer running water to still water.[citation needed]

Chameleons require lots of vitamins and minerals[citation needed]. To ensure sufficient nutrients, zoo-keepers "gut-load" insects before feeding them to chameleons, by rearing them on a diet of potatoes, fish flakes (tropical), dry puppy food, dark leafy greens, etc. and dusting them with vitamin and mineral powders.[citation needed] 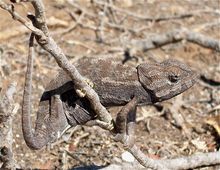 Camouflage of a Common Chameleon in its natural environment (vicinity of Oueslatia, Tunisia) 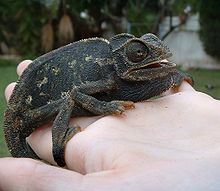 The primary purpose of color change has been found to be due to social signalling, as opposed to camouflage, although both social signalling color change, and color change for purposes of camouflage do occur in most chameleons, to some extent. Color change is also used as an expression of the physiological condition of the lizard, and as a social indicator to other chameleons. Research suggests that social signaling was the primary driving force behind the evolution of color change, and that camouflage evolved as a secondary concern.[9][10] Chameleons tend to show darker colors when angered, or attempting to scare or intimidate others, and males show lighter, multi-colored patterns when courting females.

Some varieties of chameleon—such as the Smith's dwarf chameleon—use their color-changing ability to blend in with their surroundings, as an effective form of camouflage.[11]

The desert dwelling Namaqua Chameleon also uses color change as an aid to thermoregulation, becoming black in the cooler morning to absorb heat more efficiently, then a lighter grey colour to reflect light during the heat of the day - or showing both colours at the same time, neatly separated left from right by the spine.

Chameleons have specialized cells, collectively called chromatophores, that lie in layers under their transparent outer skin. The cells in the upper layer, called xanthophores and erythrophores, contain yellow and red pigments respectively. Below these is another layer of cells called iridophores or guanophores, and they contain the colorless crystalline substance guanine. These are particularly strong reflectors of the blue part of incident light. If the upper layer of chromatophores appears mainly yellow, the reflected light becomes green (blue plus yellow). A layer of dark melanin contained in melanophores is situated even deeper under the reflective iridophores. The melanophores determine the 'lightness' of the reflected light. These specialized cells are full of pigment granules, which are located in their cytoplasm. Dispersion of the pigment granules in the cell grants the intensity of appropriate color. If the pigment is equally distributed in the cell, the whole cell has the intensive color, which depends on the type of chromatophore cell. If the pigment is located only in the centre of the cell, the cell appears to be transparent. All these pigment cells can rapidly relocate their pigments, thereby influencing the color of the chameleon. Chameleons are born with cells call pigment this cells lie in layers under the chameleon's skin. The top layers of chromatophores have red or yellow pigment. The lower layers have blue or white pigment. When these pigment cells get bigger, the chameleon's skin color changes. Chromatophores change because the cells get a message from the brain to enlarge or to shrink. These actions cause cell pigments to mix, similar to paint, creating other colors like green or purple. [12] 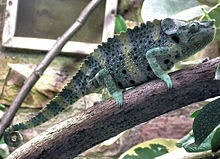 A number of monoxenous coccidia are known to infect these species including species of the genera Choleoeimeria, Eimeria and Isospora.