New Generations of the People's Party of Spain

New Generations of the People's Party of Spain

New Generations of the People’s Party (Spanish: Nuevas Generaciones, NNGG) is the youth organization of the Spanish Partido Popular. It operates in all Spanish territories and also has structures in other countries such Belgium, Argentina, and Uruguay.[citation needed] They share the same ideological platform of the PP: Centre-right and liberalism, according to their own organization, centro reformista.[1]

Their main objective is to involve young people in politics through supporting the policies, principles and values of the party by developing the 48th article of the Spanish Constitution.[2]

It has around 65,000 members throughout Spain, approximately 65% of young people involved in political organizations.[3].

New Generations was created as New Generations of the Alianza Popular in 1978, supported by the former Alianza Popular, Secretaries, Jorge Verstrynge and Loyola de Palacio. Its first assembly took place on 17 and 18 April that year and Loyola was elected as the first Chairwoman. Later, in September 2006 during the 12th National Congress in Toledo, she was named Honorary Founder President.

On 13 July 1997 Miguel Ángel Blanco Garrido, a member of New Generations and town councillor of Ermua (Vizcaya), was assassinated by ETA.[4] 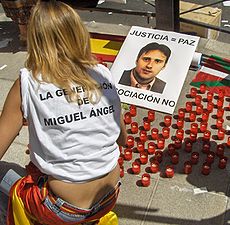