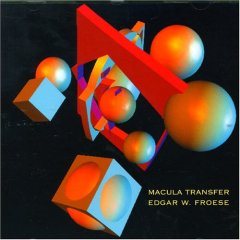 "Macula Transfer" is the name of the third solo album released by leader , in .

The tracks were composed on plane flights while Tangerine Dream was touring; each track is named after the flight number of an airplane.

The original album was released on Brain Records, and has not officially been released on CD.During 1998 the original recording was licensed by Manikin Records and released as a CD; however, this was done without Froese's consent. It was quickly withdrawn from sale under threat of legal action.

Froese has subsequently remixed the album, adding newly recorded material to the 1970s recordings. The new reworked album is available on CD under the original title, with new cover art (pictured). This reworking has enabled Froese to extend the duration of the copyright on the music, and avoid various contract and licensing issues.{ [fact