In nuclear and particle physics, the concept of a neutron cross section is used to express the likelihood of interaction between an incident neutron and a target nucleus. In conjunction with the neutron flux, it enables the calculation of the reaction rate, for example to derive the thermal power of a nuclear power plant. The standard unit for measuring the cross section is the barn, which is equal to 10-28 m2 or 10-24 cm2.

The neutron cross section, and therefore the probability of an interaction, depends on:

and, to a lesser extent, of:

The neutron cross section is defined for a given type of target particle. For example, the capture cross section of hydrogen-2 (referred to as deuterium) is much smaller than that of common hydrogen-1[1] . This is the reason why some reactors use heavy water (in which most of the hydrogen is deuterium) instead of ordinary light water as moderator: fewer neutrons are lost by capture inside the medium, hence enabling the use of natural uranium instead of enriched uranium. This is the principle of a CANDU reactor.

If the neutron is absorbed when approaching the nuclide, the atomic nucleus moves up on the table of isotopes by one position. For instance, U-235 becomes U-236* with the * indicating the nucleus is highly energized. This energy has to be released and the release can take place through any of several mechanisms.

Since neutrons interact with the nuclear potential, the scattering cross-section varies with the atomic number of the element in question. A very prominent example is hydrogen and its isotope deuterium. The total cross-section for hydrogen is over 10 times that of deuterium, mostly due to the large incoherent scattering length of hydrogen. Metals tend to be rather transparent to neutrons, aluminum and zirconium being the two best examples of this. 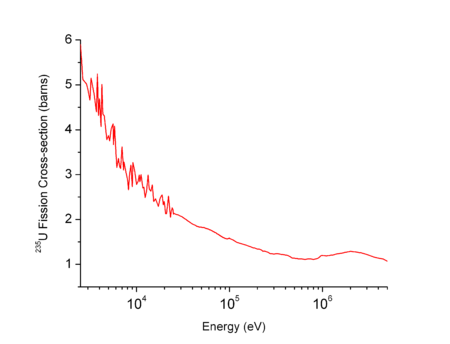 Therefore, a cross section should be defined either at a given energy or should be averaged in an energy range (or group). See here for more details.

As an example, the plot on the right shows that the fission cross section of the uranium 235 is low at high neutron energies but becomes higher at low energies. Such physical constraint explains why most of the operational nuclear reactors use a neutron moderator to reduce the energy of the neutron and thus increase the probability of fission, essential to produce energy and sustain the chain reaction.

Cross sections are usually measured at 20°C. To account for the dependence with temperature of the medium (viz. the target), the following formula is used [2]:

Link to reaction rate and interpretation

Let us imagine a spherical target (in grey in the figure) and a beam of particles (in blue) “flying” at speed v (vector in black) in the direction of the target. We want to know how many particles impact it during time interval dt. To achieve it, the particles have to be in the cylinder in green in the figure (volume V). The base of the cylinder is the geometrical cross section of the target perpendicular to the beam (surface σ in red) and its height the length travelled by the particles during dt (length v dt):

Noting n the number of particles per unit volume, there are n V particles in the volume V, which will, per definition of V, undergo a reaction. Noting r the reaction rate onto one target, it gives:

It follows directly from the definition of the neutron flux[2] Φ = n v:

The “nuclear cross section” is consequently a purely conceptual quantity representing how big should be the atom to be consistent with this simple mechanical model.

Cross sections depend strongly on the incoming particle speed. In the case of a beam with multiple particle speeds, the reaction rate R is integrated over the whole range of energy:

Where σ(E) is the continuous cross section, Φ(E) the differential flux and N the target atom density.

In order to obtain a formulation equivalent to the mono energetic case, an average cross section is defined:

Φ(E) dE is the integral flux.

Using the definition of the integral flux Φ and the average cross section σ, the same formulation as before is found:

where N is the atomic density of target.

The aim of this paragraph is to evaluate the “mean free path” λ of a random particle, that is to say the average length travelled between two interactions.

The total length L that non perturbed particles travel during a time interval dt in a volume dV is simply the product of the length l covered by each particle during this time with the number of particles N in this volume:

Noting v the speed of the particles and n is the number of particles per unit volume:

Using the definition of the neutron flux[2] Φ

This average length L is however valid only for unperturbed particles. To account for the interactions, L is divided by the total number of reactions R to obtain the average length between each collision λ:

From #Microscopic versus macroscopic cross section:

where λ is the mean free path and Σ is the macroscopic cross section.

Because lithium-8 and beryllium-12 form natural stopping points on the table of isotopes for hydrogen fusion it is believed that all of the higher elements are formed in very hot stars where higher orders of fusion predominate. A star like the Sun produces energy by the fusion of simple H-1 into helium-4 through a series of reactions. It is believed that when the inner core exhausts its H-1 fuel the sun will contract, slightly increasing its core temperature until He-4 can fuse and become the main fuel supply. Pure He-4 fusion leads to Be-8, which decays back to 2 He-4 therefore the He-4 must fuse with isotopes either more or less massive than itself to result in an energy producing reaction. When He-4 fuses with H-2 or H-3 it forms stable isotopes Li-6 and Li-7 respectively. The higher order isotopes between Li-8 and C-12 are synthesized by similar reactions between hydrogen, helium and lithium isotopes.