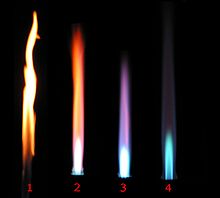 In various burners, the oxidizing flame is a flame produced with an excessive amount of oxygen. A flame with a good balance of oxygen is clear blue. When the amount of oxygen increases, the color darkens, the flame shortens, and it hisses and roars.[1] With some exceptions (e.g., soldering of platinum, in jewelry), the oxidizing flame is undesirable in welding and soldering, since, as the name suggests, it oxidizes the surface of the metal.[1]

The reducing flame is the flame low in oxygen. It has a yellow or yellowish color due to elements (typically carbon or hydrocarbons[2]) which would bind ("reduce") with the oxygen contained in the materials processed with the flame. [1] The reducing flame is also called the carburizing flame, since this flame tends to introduce carbon into the molten metal.

The neutral flame is the flame in which the amount of oxygen is only enough for burning, and neither oxidation nor reduction occurs.[1]

The reducing or neutral flame is useful in soldering and annealing.[1]