Neuromechanical adaptations to pregnancy refers to the change in gait, postural parameters, as well as sensory feedback, due to the numerous anatomical, physiological, and hormonal changes women experience during pregnancy. Such changes increase their risk for musculoskeletal disorders and fall injuries. Musculoskeletal disorders include lower-back pain, leg cramps, and hip pain. Pregnant women fall at a similar rate (27%) to women over age of 70 years (28%). Most of the falls (64%) occur during the second trimester. Additionally, two-thirds of falls are associated with walking on slippery floors, rushing, or carrying an object.[1]

The root causes for these falls are not well known. However, some factors that may contribute to these injuries include deviations from normal posture, balance, and gait.

The addition of mass, particularly around the torso, naturally changes a pregnant mother's center of mass (COM). The change in COM requires pregnant mothers to adjust their bodies to maintain balance. 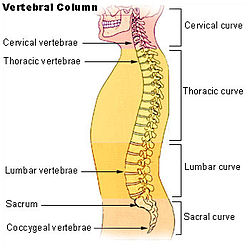 The different regions of the vertebral column.

To positionally compensate the additional load due to the pregnancy, pregnant mothers often extend their lower backs. As the fetal load increases, women tend to arch their lower backs, specifically in the lumbar region of their vertebral column to maintain postural stability and balance. The arching of the lumbar region is known as lumbar lordosis, which recovers the center of mass into a stable position by reducing hip torque. According to a study conducted by Whitcome, et al., lumbar lordosis can increase from an angle of 32 degrees at 0% fetal mass (i.e. non-pregnant women or very early in pregnancy) to 50 degrees at 100% fetal mass (very late in pregnancy). Postpartum, the angle of the lordosis declines and can reach the angle prior to pregnancy. Unfortunately, while lumbar lordosis reduces hip torque, it also exacerbates spinal shearing load,[2] which may be the cause for the common lower back pain experienced by pregnant women.[3]

Given the demands of fetal loading during pregnancy and the importance of producing offspring to the fitness of human beings, one can imagine that natural selection has had a role in selecting a unique anatomy for the lumbar region in females. It turns out that there are sex differences in the lumbar vertebral column of human males and females, which ultimately helps mitigate some of the discomfort due to the fetal load in females. There are 5 vertebrae in the lumbar region for both males and females. However, the 3 lower vertebrae of a female's lumbar region are dorsally wedged while for males, only the lower 2 of the lumbar region are dorsally wedged. When a female arches her lower back, such as during fetal loading, having an extra dorsally wedged vertebra lessens the shearing force. This lumbar sexual dimorphism in humans suggests high natural selection pressures have been acting to improve maternal performance in posture and locomotion during pregnancy.[2]

If natural selection has acted on the lumbar region of Homo Sapiens to create this sexual dimorphism, then this sort of trait should also be apparent in the genus Australopithecus, hominins that have been known to be habitually bipedal for at least 2 million years after the earliest bipedal hominins. Currently there are 2 nearly complete australopith lumbar segments; one has three dorsally wedged vertebrae in the lumbar region while the other has two. An explanation for these findings is that the first one is a female, while the latter is a male. This sort of evidence supports the notion that natural selection has played a dimorphic role in designing the anatomy of the vertebral lumbar region.[2] 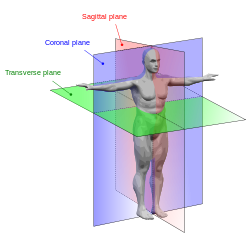 Anatomical planes in a human

The weight added during the progression of pregnancy also affects the ability to maintain balance. In biomechanics, balance refers to one’s ability to maintain the center of gravity within the base of support with minimal postural sway. In other words, the moment (or torque) generated by gravity must be balanced by the ankle moment in order to maintain postural stability. Although quiet standing appears to be static, it is actually a process of rocking from the ankle in the sagittal plane.[4]

Currently, there are 3 main hypotheses suggesting how humans maintain postural stability while standing.

The stiffness model was first introduced by Winter et al., in 1998,[5] and states that simple stiffness of ankle muscles account for the control of balance during quiet standing. The stiffness of the ankle muscle was determined experimentally by summing up the moments (or torque) left and right about the ankle and dividing it by the sway angle (angle at which the center of mass is displaced from the center of pressure). It was found in both analytical and experimental data (using human subjects) that there was a linear relationship between moments about the ankle muscle and sway angle. Additionally, the stiffness (i.e. total moment divided by sway angle) was found to be very close to 1, indicating a resemblance between the ankle joint and a perfect spring.

The moment arm of ankle muscle hypothesis for postural stability was first developed in 1993 by Young et al.[6] and has been primarily seen in cats, though it is speculated that such mechanisms may also exist in humans. Results obtained from Young et al. showed that in the cat ankle joint, many of its muscles have predominant moment arms about the adduction/abduction axis. Smaller moment arms are found in inversion/eversion and about the principle axis of motion, dorsiflexion/extension. Additionally, Young et al. showed that the magnitudes of the moment arms in abduction/adduction and inversion/eversion strongly depended on joint angle. As the joint angle moved increasingly away from the neutral axis, the magnitude of the of the moment arms also increased. Such a finding suggests that, at least in cats, the coactivation of these agonist-antagonist muscles is used for immediate stabilization in posture.

While these are the three leading hypotheses, of course there is always a possibility that there is a combination of all mechanisms that ultimately allows humans to maintain postural stability during quiet standing. Additionally, it is important to keep in mind that there are also many physiological factors such as weight, internal noise to muscles, etc. that may come into play when trying to understand the factors that contribute to postural stability.

Pregnant women have a decreased perception of balance during quiet standing, which is confirmed by an increase in anterior-posterior sway.[9] This relationship heightens as pregnancy progresses and significantly decreases post-partum. To compensate for the decrease in balance stability (both actual and perceived), stance width increases to maintain postural stability.

Under dynamic postural stability, which can be defined as the response to anterior (front) and posterior (back) translation perturbations, the effects of pregnancy are different. Initial sway, total sway, and sway velocity (see figure for description of variables) are significantly less during the third trimester than during the second trimester and when compared to non-pregnant women. These biomechanical characteristics are possible reasons why falls are more prevalent during the second trimester during pregnancy.

Additionally, the time it takes for pregnant women (any stage of pregnancy) to react to a translational disturbance is not significantly different than that of non-pregnant women.[10] This alludes to some sort of stability mechanism that allow pregnant women to compensate for the changes they experience during pregnancy.

Gait in pregnant women often appear as a “waddle” – a forward gait that includes a lateral component. However, research has shown that the forward gait alone remains unchanged during pregnancy. It has been found that gait parameters such as gait kinematics, (velocity, stride length, and cadence) remain unchanged during the third trimester of pregnancy and 1 year after delivery. These parameters suggest that there is no change in forward movement. There is, though, a significant increases in kinetic gait parameters, which may be used to explain how gait motion remains relatively unchanged despite increase in body mass, width and changes in mass distribution about the waist during pregnancy. These kinetic gait parameters suggest an increased use of hip abductor, hip extensor, and ankle plantar flexor muscle groups. To compensate for these gait deviations, pregnant women often make adaptations that can result in muscoskeletal injuries. While the idea of "waddling" cannot be dispensed, these results suggest that exercise and conditioning may help relieve these injuries.[11]