Nero (son of Germanicus)
For other uses, see Nero (disambiguation). 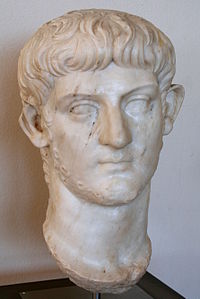 Nero Julius Caesar Germanicus (c. AD 6 –AD 30) was a close relative of the Roman Emperors of the Julio-Claudian dynasty.

Nero's siblings included four brothers (Tiberius and Gaius Julius, who died young; Drusus Caesar; and the future Emperor Caligula) and three sisters (Agrippina the Younger, Julia Drusilla, and Julia Livilla). In 20, he married Julia (daughter of Drusus the Younger), daughter of Livilla and Drusus "Castor" (Tiberius' only son by Vipsania).

Nero was the oldest adoptive grandson of Tiberius, and was seen as the emperor's most obvious successor. However, he was accused of treason along with his mother in 29. Nero was exiled to the island of Ponza where in 30 he was either induced to commit suicide or else starved to death.