The Lockheed P-2 Neptune (originally designated P2V until September 1962) was a Maritime patrol and ASW aircraft. It was developed for the United States Navy by Lockheed to replace the Lockheed PV-1 Ventura and PV-2 Harpoon, and being replaced in turn with the Lockheed P-3 Orion. Designed as a land-based aircraft, the Neptune never made a carrier landing, although a small number of aircraft were converted and deployed as carrier launched stop-gap nuclear bombers which would have to ditch or recover at land bases. The type was successful in export and saw service with several armed forces. 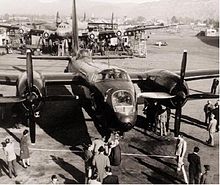 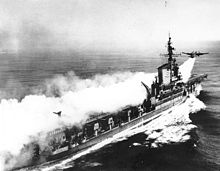 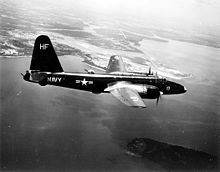 Development began early in World War II, but compared to other aircraft in development at the time, it was considered a low priority. It was not until 1944 that the program went into full swing. A major factor in the design was ease of manufacture and maintenance, and this may have been a major factor in the type's long life and worldwide success. The first aircraft flew in 1945. Production began in 1946, and the aircraft was accepted into service in 1947.

It was one of the first aircraft to be fitted in operational service with both piston and jet engines. The Convair B-36, several Boeing C-97 Stratofreighter, Fairchild C-123 Provider, and Avro Shackleton aircraft were also so equipped. The jet engines were fitted with intake doors that could be closed for economical piston-engine only searching operations. The jet engines could be employed for sprint or short field take-off, but were seldom used in typical operations.

Normal crew access was via a ladder on the aft bulkhead of the nose wheel well to a hatch on the left side of the wheel well, then forward to the observer nose or up through another hatch to the main deck. There was also a hatch in the floor of the after fuselage, near the sonobuoy chutes.

Prior to the introduction of the P-3 Orion in the mid-1960s the Neptune was the primary US land-based anti-submarine patrol craft, intended to be operated as the hunter of a '"Hunter-Killer" group, with Destroyers employed as killers. Several features aided this task:

As the P-2 was replaced in the U.S. Navy by the P-3A Orion in active Fleet squadrons in the early and mid-1960s, the P-2 continued to remain operational in the Naval Air Reserve through the mid 1970s, primarily in its SP-2H version. As active Fleet squadrons transitioned to the P-3B and P-3C in the mid- and late-1960s and early 1970s, the Naval Reserve P-2s were eventually replaced by P-3As and P-3Bs and the P-2 exited active US naval service. VP-23 was the last active duty patrol squadron to operate the SP-2H, retiring its last Neptune on 20 February 1970.[1]

At the end of World War II, the US Navy felt the need to acquire a nuclear strike capability to maintain its political influence. In the short term, carrier-based aircraft were the best solution. Nuclear munitions at that time were bulky and required a large aircraft to carry them. The Navy improvised a carrier-based nuclear strike aircraft by modifying the P2V Neptune for carrier takeoff using jet assisted takeoff (JATO) rocket boosters, with initial takeoff tests in 1948. But the Neptune couldn't land on a carrier, so the crew either had to make their way to a friendly land base after a strike, or ditch in the sea near a US Navy vessel. It was replaced in this emergency role by the North American AJ Savage the first nuclear strike aircraft that was fully capable of carrier launch and recovery operations; it was also short lived in that role as the Navy was adopting fully jet powered nuclear strike aircraft.[2]

In 1954 under Project Cherry, the US Central Intelligence Agency (CIA) obtained five newly built P2V-7 and converted these into P2V-7U/RB-69A variants by Lockheed's Skunk Works at Hangar B5 in Burbank, California, for the CIA's own private fleet of covert ELINT/ferret aircraft. Later to make up P2V-7U/RB-69A operational losses, the CIA obtained and converted two existing US Navy P2V-7s, one in September 1962, and one in December 1964 to P2V-7U/RB-69A Phase VI standard, and also acquired an older P2V-5 from US Navy as training aircraft in 1963. Test flights done by lead aircraft at Edwards AFB from 1955 to 1956, all the aircraft painted with dark sea blue color but with USAF markings. In 1957 one P2V-7U was sent to Eglin AFB for testing aircraft performance at low level and under adverse conditions. The initial two aircraft were sent to Europe, based at Wiesbaden, West Germany, but were later withdrawn in 1959 when the CIA reduced its covert aircraft assets in Europe. The CIA sent the other two P2V-7U/RB-69As to Hsinchu Air Base, Taiwan, where by December 1957, they were given to a "Black Op" unit, the 34th Squadron, better known as the Black Bat Squadron, of the Republic of China Air Force (|ROCAF/Taiwan); these were painted in ROCAF/Taiwan markings. The ROCAF/Taiwan P2V-7U/RB-69A's mission was to conduct low level penetration flights into mainland China to conduct ELINT/ferret missions including mapping out China's air defense networks, inserting agents via airdrop, and dropping leaflets and supplies. The agreement for plausible deniability between US and ROC government meant the RB-69A would be manned by ROCAF/Taiwan crew while conducting operational missions, but would be manned by CIA crew when ferrying RB-69A out of Taiwan or other operational area to US.

The P2V-7U/RB-69A flew with ROCAF/Taiwan Black Bat Squadron over China from 1957 to November 1966. All five original aircraft (two crashed in South Korea, three shot down over China) lost with all hands on board. In January 1967, two remaining RB-69As flew back to NAS Alameda, California, and were converted back to regular US Navy P2H/P2V-7 ASW aircraft configurations.[3][4]Most of the 34th Squadron's Black Op missions still remain classified by the CIA, although a CIA internal draft history, Low-Level Technical Reconnaissance over Mainland China (1955-66), reference CSHP-2.348, written in 1972 that covers CIA/ROCAF/Taiwan 34th Squadron's Black Op missions is known to be in existence but would not be declassified by the CIA until after 2022.[5]

During the Vietnam War, the Neptune was used by the US Navy as a gunship, an overland reconnaissance and sensor deployment aircraft, and in its traditional role as a maritime patrol aircraft. The Neptune was also utilized by the U.S. Army's 1st Radio Research Company (Aviation), call sign "Crazy Cat," located at Cam Ranh Bay, as an electronic "ferret" aircraft. Observation Squadron 67 (VO-67), call sign "Lindy", was the only P-2 Neptune aircraft squadron to ever receive the Presidential Unit Citation. VO-67 lost three OP-2E aircraft and 20 aircrew to ground fire during its secret missions into Laos and Vietnam in 1967–68. The ROCAF/Taiwan's secret 34th Squadron's RB-69A/P2V-7U ELINT/SIGINT aircraft flew a low level electronic reconnaissance from Da Nang, flying over Thanh Hoa province on 20 August 1963 to investigate an air resupply drop zone that turned out to be a set trap for a Republic of China Air Force (ROCAF) C-123B airdrop mission 10 days earlier due to the air-inserted agents having been captured and turned. Next year, an air defense radar mapping mission was also flown by 34th Squadron's RB-69A/P2V-7U aircraft into North Vietnam and Laos on the night of 16 March 1964. The RB-69A took off from Da Nang, flew up the Gulf of Tonkin before coasting in near Haiphong, then flew down North Vietnam and the Laos border. The mission was requested by SOG for helping plan the insert or resupply of agents. Seven AAA sites, 14 early warning radar sites and two CGI radar signals were detected.[5]

The Argentine Naval Aviation had received at least 16 Neptunes in different variants since 1958 including eight ex-RAF for use in the Escuadrilla Aeronaval de Exploración (English: Naval exploration squadron). They were intensively used in 1978 during the Operation Soberania against Chile including over the Pacific Ocean.[6]

During the Falklands War (Spanish: Guerra de las Malvinas) in 1982, the last two airframes in service (2-P-111 and 2-P-112) played a key role of reconnaissance and aiding Dassault Super Étendards, particularly on the 4 May attack against HMS Sheffield. The lack of spare parts, caused by the US having enacted an arms embargo in 1977 due to the Dirty War, led to the type being retired before the end of the war; Argentine Air Force C-130 Hercules took over the task of searching for targets for strike aircraft.

In 1983, the unit was reformed with Lockheed L-188 Electras modified for maritime surveillance; in 1994 these were replaced with P-3B Orions.

The Canadian version of the Lockheed Neptune (P2V-7) served in the RCAF Maritime Air Command from 1955, as an anti-submarine, anti-shipping and maritime reconnaissance aircraft, being fitted with just piston engines initially. In 1957, the Neptunes had two underwing Westinghouse J34 jet engine pods installed. This conversion provided additional thrust for an improved takeoff, increased endurance by allowing higher weights of fuel and generally improved the overall performance of the aircraft. Armament included two torpedoes, mines, depth charges, bombs carried internally plus unguided rockets mounted externally underwing. A total of 25 Neptunes served with nos. 404, 405 and 407 Squadrons. Upon unification of the Canadian Forces in 1968, the Neptune was re-designated the CP-122 and was replaced by the Canadair CP-107 Argus the same year.[7]

The Royal Air Force Coastal Command operated 52 P2V-5s, designated Neptune MR.1s as a stop-gap modern maritime patrol aircraft until the Avro Shackletons could enter service.[8] They were used from between 1952[9] and March 1957,[10] being used for Airborne Early Warning experiments as well as for maritime patrol.[11]

In Australia, the Netherlands, and the US Navy, its tasks were taken over by the larger and more capable Lockheed P-3 Orion, and by the 1970s, it was only in use by patrol squadrons in the US Naval Reserve. The US Naval Reserve abandoned its last Neptunes in 1978, those aircraft also having been replaced by the P-3 Orion. By the 1980s, the Neptune had fallen out of military use in most purchasing nations, replaced by newer aircraft.

In Japan, the Neptune was license-built from 1966 by Kawasaki as the P-2J, with the piston engines replaced by IHI-built T64 turboprops. Kawasaki continued their manufacture much later than Lockheed did; the P-2J remained in service until 1984.

P-2/P2Vs are currently employed in aerial firefighting roles by operators such as Aero Union and Neptune Aviation Services and can carry 2,400 gal (9,084 l) of retardant with a service life of 15,000 hours. Neptune proposes to replace them with Bombardier Q200 and Q300 aircraft which are estimated to have a service life of 80,000 hours.

The third production P2V-1 was chosen for a record-setting mission, ostensibly to test crew endurance and long-range navigation but also for publicity purposes: to display the capabilities of the Navy's latest patrol bomber. Its nickname was "The Turtle," which was painted on the aircraft's nose (along with a cartoon of a turtle smoking a pipe pedaling a device attached to a propeller). However, in press releases immediately before the flight, the Navy referred to it as "The Truculent Turtle".[12]

Loaded with fuel in extra tanks fitted in practically every spare space in the aircraft, "The Turtle" set out from Perth, Australia to the United States. With a crew of four (and a nine-month-old gray kangaroo, a gift from Australia for the Washington, D.C. zoo) the aircraft set off on 9 September 1946, with a RATO (rocket-assisted takeoff). Two and a half days (55h, 18m) later, "The Turtle" touched down in Columbus, Ohio, 11,236.6 mi (18,083.6 km) from its starting point. It was the longest unrefueled flight made to that point - 4,000 mi (6,400 km) longer than the USAF's Boeing B-29 Superfortress record. This would stand as the absolute unrefueled distance record until 1962 (beaten by a USAF Boeing B-52 Stratofortress), and would remain as a piston-engined record until 1986 when Dick Rutan's Voyager would break it in the process of circumnavigating the globe. "The Turtle" is preserved at the National Museum of Naval Aviation at NAS Pensacola. 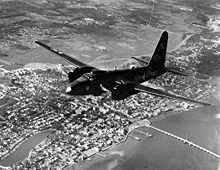 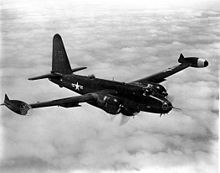 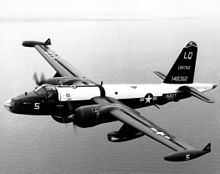 Lockheed produced seven main variants of the P2V. In addition, Kawasaki built the turboprop-powered P-2J in Japan. Model names after the 1962 redesignation are given in parentheses. 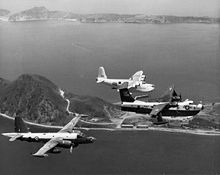 There are a few Neptunes that have been restored and are on display in museums and parks.[17]