Tournai (French pronunciation: [tuʁnɛ], in Dutch Doornik, in Latin: Tornacum) is a Walloon city and municipality of Belgium located 85 kilometres southwest of Brussels, on the river Scheldt, in the province of Hainaut.

Along with Tongeren, Tournai is the oldest city in Belgium and it has played an important role in the country's cultural history.

Tournai is located in the lowlands of Belgium, at the southern limit of the Flemish plain, in the basin of the river Escaut ("Schelde" in Dutch). Administratively, the town is part of the Province of Hainaut, itself part of Wallonia. It is also a municipality that is part of the French-speaking Community of Belgium. Tournai has its own arrondissements, both administrative and judicial.

Rocks from the Tournai area date from the Carboniferous Period and have been used to define the Tournaisian Age, a subdivision of the Carboniferous lasting from 359 to 345 million years ago. Tournai stone is a dark limestone which takes a polish and was used particularly in the Romanesque period for sculpted items such as baptismal fonts. It is also hard enough to have been used locally for pavements and kerb-stones. It is sometimes called Tournai marble, though this is geologically inaccurate. 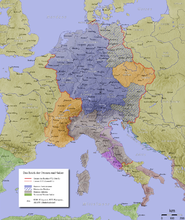 Tournai on the northeast border of France, 10th century

Tournai, known as Tornacum, was a place of minor importance in Roman times, a stopping place where the Roman road from Cologne on the Rhine to Boulogne on the coast crossed the river Scheldt. It was fortified under Maximian in the third century,[2] when the Roman limes was withdrawn to the string of outposts along the road. It came into the possession of the Salian Franks in 432. Under king Childeric I, who was buried or reburied there,[3] Tournai was the capital of the Frankish empire. In 486, Clovis moved the center of power to Paris. In turn, a native son of Tournai, Eleutherius, became bishop of the newly created bishopric of Tournai, extending over most of the area west of the Scheldt. In 862 Charles the Bald, first king of Western Francia and still to become Holy Roman Emperor, would make Tournai the seat of the County of Flanders.

After the partition of the Frankish empire by the Treaties of Verdun (843) and of Meerssen (870), Tournai remained in the western part of the empire, which in 987 became France. The city participated in eleventh-century rise of towns in the Low Countries, with a woollen cloth industry based on English wool, which soon made it attractive to wealthy merchants. An ambitious rebuilding of the cathedral was initiated in 1030. The commune's drive for independence from the local counts succeeded in 1187, and the city was henceforth directly subordinated to the French Crown, as the seigneurie de Tournaisis, as the city's environs are called. The stone Pont des Trous over the Scheldt, with defensive towers at either end, was built in 1290, replacing an earlier wooden structure.

During the 15th century, the city's textile trade boomed and it became an important supplier of tapestry. The art of painting flourished too: Jacques Daret, Robert Campin and Rogier van der Weyden all came from Tournai. It was conquered in 1513 by Henry VIII of England, making it the only Belgian city ever to have been ruled by England. It was also represented in the 1515 Parliament of England. The city was handed back to French rule in 1519.

In 1521, Emperor Charles V added the city to his possessions in the Low Countries, leading to a period of religious strife and economic decline. During the 16th century, Tournai was a bulwark of Calvinism, but eventually it was conquered by the Spanish governor of the Low Countries, the Duke of Parma, following a prolonged siege in 1581. After the fall of the city, its Protestant inhabitants were given one year to sell their possessions and emigrate, a policy that was at the time considered relatively humane, since very often religious opponents were simply massacred.

One century later, in 1668, the city briefly returned to France under Louis XIV in the Treaty of Aachen. After the end of the War of Spanish Succession in 1713, under terms of the Treaty of Utrecht the former Spanish Netherlands, including Tournai, came into possession of the Austrian Habsburgs. From 1815 on, following the Napoleonic Wars, Tournai formed part of the United Netherlands and after 1830 of newly independent Belgium. Badly damaged in 1940, Tournai has since been carefully restored. 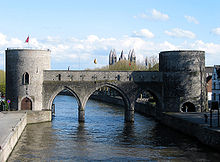 Tournai is considered to be one of the most important cultural sites in Belgium. The mixed Romanesque- and Gothic-style cathedral of Notre Dame de Tournai and the belfry, the oldest in Belgium, have been jointly designated by UNESCO as a World Heritage Site. Inside the cathedral, the Châsse de Notre-Dame flamande, a beautifully ornate 12th-century reliquary, gives witness to Tournai's wealth in the Middle Ages. Other places of interest are the 13th-century Scheldt bridge (Pont-des-Trous) and the main square (Grand'Place), as well as several old city gates, historic warehouses, and a variety of museums.

On rue Barre-St-Brice are two of the oldest private houses in Europe, dating from between 1175 and 1200 and built in the Romanesque style, while the rue des Jésuites includes a Gothic house from the 13th century.

As is the case with many cities in Belgium there are a number of beautiful and friendly cafés and pubs in the Grand'Place. In the middle of the Grand'Place there are a series of water fountains that are fun to observe and even play in for people of all ages. Another great interactive experience available is climbing the circular staircase to the top of the belfry.

There are several buildings in the art nouveau style. 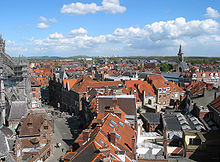 The roofs of Tournai

Tournai is a French-speaking town of Belgium. The local language is tournaisien, a Picard dialect similar to that of other communes of Hainaut and Northern France.

Tournai belongs to Romance Flanders, like Lille, Douai, Tourcoing, and Mouscron. The city of Tournai was one of the greatest cultural and economic centers of the County of Flanders. Some traces can still be seen today:

Although Tournai is in the Flemish cultural area (of the Scheldt), it also possesses some treasures of the Mosan style. Indeed, the two most beautiful shrines of the Cathedral, commissioned by the Bishop of Tournai, were made in the region of Liège by the artist Nicholas of Verdun: the shrines of Saint-Eleutherius and of Our Lady of Flanders (13th century). Those shrines testify to the opulence of the towns of Tournai and Liège during the Middle-Ages. The shrine of Our Lady of Flanders has been called one of the seven wonders of Belgium.