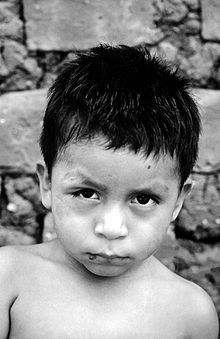 A young boy from Panama suffering from Chagas disease. It has manifested as an acute infection with swelling of one eye (chagoma).

The neglected diseases are a group of tropical infections which are especially endemic in low-income populations in developing regions of Africa, Asia, and the Americas. Different organizations define the set of diseases differently. In sub-Saharan Africa, the impact of these diseases as a group is comparable to malaria and tuberculosis.[1] Some of these diseases have known preventive measures or acute medical treatments which are available in the developed world but which are not universally available in poorer areas. In some cases, the treatments are relatively inexpensive. For example, the treatment for schistosomiasis is USD $0.20 per child per year.[2] Nevertheless, control of neglected diseases is estimated to require funding of between US$2 billion to US$3 billion over the next five to seven years.[3]

These diseases are contrasted with the big three diseases (HIV/AIDS, tuberculosis, and malaria), which generally receive greater treatment and research funding. The neglected diseases can also make HIV/AIDS and tuberculosis more deadly.[4] However, some pharmaceutical companies have committed to donating all the drug therapies required and mass drug administration has been successfully accomplished in several countries.[5]

Neglected tropical diseases include in order of decreasing prevalence:[6]

Incentives for research and development

The U.S. Food and Drug Administration priority review voucher is an incentive for companies to invest in new drugs and vaccines for tropical diseases. A provision of the Food and Drug Administration Amendments Act (HR 3580) awards a transferable “priority review voucher” to any company that obtains approval for a treatment for one of the listed diseases. The voucher can later be used to accelerate review of an unrelated drug. This program is for all tropical diseases and includes medicines for malaria and tuberculosis. The first voucher given was for Coartem, a malaria treatment.[12] It does not use or define the term "neglected" though most of the diseases listed are often included on lists of neglected diseases.

Biotechnology companies in the developing world have targeted neglected tropical diseases due to need to improve global health.[14]

Anacor Pharmaceuticals, located in Palo Alto, California, is a biopharmaceutical company with a unique chemistry platform using the element boron in its therapeutic compounds. Its boron chemistry platform appears to be well suited for the treatment of neglected diseases therefore Anacor has partnered with several not-for-profit organizations to discover therapies for these diseases. Anacor currently has partnerships with Drugs for Neglected Diseases Initiative to develop new therapeutics for African Sleeping Sickness, Visceral Leishmaniasis, and Chagas Disease; Medicines for Malaria Venture to develop new therapeutics for the treatment of malaria; the TB Alliance to explore therapeutics for tuberculosis; UCSF's Sandler Center to identify a drug candidate for River Blindness; and the Institute for OneWorld Health to identify antibacterial compounds to treat shigellosis, or bloody diarrhea.