Chimay
For the Belgian brewery named after this location, see Chimay Brewery.

Chimay (French pronunciation: [ʃi.mɛ], Walloon: Chimai) a Walloon municipality located in the Belgian province of Hainaut. On January 1, 2006, Chimay had a total population of 9,774. The total area is 197.10 km² which gives a population density of 50 inhabitants per km². The source of the Oise River is located in the municipality.

Situated in the administrative district of Thuin, the municipality was created with a merger of 14 old communes on January 1, 1977. The Trappist monastery of Scourmont Abbey is located in the town and is famous for the Chimay Brewery.

The Walloon names of the place names are in brackets and italics.

The origin of the name comes either from the Celtic word coimos meaning "pretty, pleasant " or the Old French: Chimeye jameye les pieyes

Chimay Trappist beers and cheeses are produced in the town by the Chimay Brewery, run by the Trappist monks of Scourmont Abbey, and are internationally renowned. 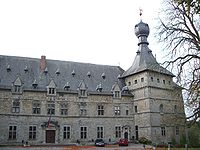 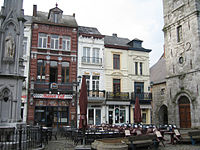 Chimay has traditionally hosted an annual motor racing event, run on a street circuit formed from local public roads. From the 1920s to 1960s the event was run for contemporary Grand Prix and sportscar categories, and included the famous Grand Prix des Frontières. In recent times, while the event has persisted it has been run for historic race series. The track briefly lost its licence in 2006 related to safety fears, but has since had it reinstated.