Necator americanus is a species of Necator. It is a class within the phylum Nematodes and commonly known as New World hookworm. It is a parasitic nematode worm that lives in the small intestine of hosts such as humans, dogs and cats. It is responsible for Necatoriasis. Since Necator americanus and Ancylostoma duodenale (also known as Old World hookworm) are the two most common human hookworms, they are usually discussed together as hookworm infection. They only differ in geographical distribution, structure of mouthparts and relative size.[1]

It has been proposed as an alternative to Trichuris suis in helminthic therapy.[2]

This parasite has two dorsal and two ventral cutting plates around the anterior margin of the buccal capsule. They also have a pair of subdorsal and a pair of subventral teeth that are located close to the rear. Males are usually 7mm-9mm long, while females are about 9mm-11mm long. The typical life span of these parasites is three to five years. They can produce anywhere between 5000 to 10,000 eggs per day.[3]

Lifecycle of a hookworm. 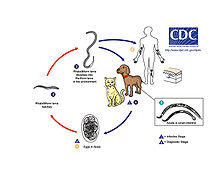 This worm starts out as an unembryonated egg in the soil. After 24–48 hours under favorable conditions, the eggs become embryonated and hatch. This first juvenile stage 1 is known as rhabditiform. The rhabditiform larvae grow and molt in the soil transforming into a juvenile stage 2. The juvenile stage 2 molts once more until reaching the juvenile 3 stage which is also called filariform; this is also the infective form. The transformation from rhabditiform to the filariform usually take 5 to 10 days[4] This larvae form is able to penetrate human skin, travel through the blood vessels and heart, reaching the lungs. Once here, they burrow through the pulmonary alveoli and travel up the trachea where they are swallowed and are destined for the small intestine. This is where they mature and reproduce into adults by attaching themselves to the intestinal wall causing an increase of blood loss by the host. The eggs end up on the soil after leaving the body through the feces.[5] On average, most adult worms are eliminated in 1 to 2 years. N. americanus life cycle only differs slightly from A. duodenale. N. americanus has no development arrest in immune hosts and it is necessary for it to migrate through the lungs.

When adult worms attach to the villi of the small intestine, they suck on the host's blood which may cause abdominal pain, diarrhea, cramps, and weight loss that can lead to anorexia. Heavy infections can lead to the development of iron-deficiency and hypochromic microcytic anemia. This form of anemia in children can give rise to physical and mental retardation. Infection caused by cutaneous larvae migrans, a skin disease in humans, is characterized by skin ruptures and severe itching.[6]

The most common technique used to diagnose a hookworm infection is to take a stool sample, fix it in 10% formalin, concentrate it using the formalin-ethyl acetate sedimentation technique, and then create a wet mount of the sediment for viewing under a microscope. However, the eggs of A. duodenale and N. americanus cannot be distinguished; thus, the larvae must be examined to identify these hookworms. Larvae cannot be found in stool specimens unless the specimen was left at ambient temperature for a day or more.

The N. americanus parasites can be treated by using benzimidazoles, albendazole and mebendazole. One single oral dose of tetrachloroethene on an empty stomach will remove about 90 percent of the parasite. Pyrantel pamoate is an alternative drug. Cryotherapy is another treatment used to kill the worms. A blood transfusion may be necessary in severe cases of anemia. Light infections are usually left untreated in areas where reinfection is common. Iron supplements and a diet high in protein will speed the recovery process.[7] In a case study involving 56-60 men with T. trichiura and/or N. americanus, results showed that both albendazole and mebendazole were 90% effective in curing T. trichiura. However, albendazole had a 95% cure rate for N. americanus, while mebendazole only had a 21% cure rate. This suggests that albendazole is most effective for treating both T. trichiura and N. americanus.[8]