German–Soviet military parade in Brest-Litovsk (German: Deutsch-sowjetische Siegesparade in Brest-Litowsk, Russian: Совместный парад вермахта и РККА в Бресте) refers to an official ceremony held by the troops of Nazi Germany and the Soviet Union on September 22, 1939 during the invasion of Poland in the city of Brest-Litovsk (Polish: Brześć nad Bugiem or Brześć Litewski, then in the Second Polish Republic, now Brest in Belarus), which marked the withdrawal of German troops to the previously agreed demarcation line and the handover of the city and its fortress to the Soviet Red Army.[1][2]

According to the initial agreement, the procedure included German and Soviet troops marching before their commanding officers followed by changing the flag, accompanied by national anthems of Germany and the USSR.[3] However, the Soviet commanding officer, Kombrig Semyon Krivoshein, writes in his memoirs that he did not allow Soviet troops to pass alongside the German forces, because he was afraid that Soviet troops, weary after a long march to Brest, would look inferior in comparison with the Germans, who stayed in the city for several days. Instead, he suggested that the Soviet columns would enter the city separately and salute the leaving Germans whenever they meet.[4] The parade took place on the Union of Lublin street (Polish: ulica Unii Lubelskiej), the main road of the city of Brest. 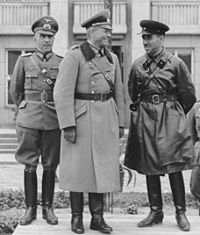 The secret protocol of the Molotov–Ribbentrop Pact, signed on August 23, 1939 defined the boundary between the German and Soviet "spheres of influence". However, during their invasion of Poland, some German forces, especially Heinz Guderian's XIX. motorized Corps, have advanced beyond this line in pursuit of their strategic goals.[2]

The XIX. Corps, approached Brest on September, 13 and defeated the Polish resistance in the ensuing battle by September, 17, establishing their base of operations in the city. During the following days, Guderian was informed, much to his chagrin, that the demarcation line between German and Soviet-controlled regions was drawn along the Bug River and that his forces were to retreat behind this line by September, 22.[5]

On September, 17, after Vasily Chuikov's 4th Army received the order to cross the Polish border, its 29th Tank Brigade, led by Kombrig Semyon Krivoshein, entered the town of Baranovichi (pl. Baranowicze).[6] After taking the town and capturing a few thousand Polish soldiers who were stationed there, his units kept on moving westward, reaching the village of Pruzhany (pl. Prużana) on 19 September.[7]

According to Krivoshein, a recon unit returned with a group of 12 German officers who identified themselves as part of Guderian's XIX Corps and explained that they, too, were moving in the direction of Brest. They were invited to Krivoshein's tent, who then proposed a toast to both commanders and invited the attending German officers to Moscow after they achieved a quick victory over "capitalist England"[8] Through them Krivoshein also sent warm greetings to the German general and made sure to approach the city from the opposite direction than that taken by the Wehrmacht.[6]

Upon approaching the town in the morning of September 22, Krivoshein realized that German troops were already busy looting the town and that Guderian had already established his headquarters there.[6] Soon afterwards, Guderian's representatives arrived, and greeted the "glorious Red Army" and its general. Following a short exchange of formalities, Krivoshein offered to visit Guderian and personally pay his respects to him. The offer was accepted and Krivoshein was taken to the German headquarters to share breakfast with the German General.[4]

During the meeting, Guderian proposed a joint parade of Soviet and German troops through the town, including a lineup of soldiers from both armies on the central square. Because the Soviet troops were tired after a long march, Krivoshein declined, but promised to supply a military band and a few battalions, and agreed to Guderian's request that he and Guderian would stand and review the parade together.[4][6][7]

The parade began at 16:00,[4] and the "Victory Arches" were erected which the Soviet troops decorated with swastikas and red stars, and through which German troops marched.[9] The Soviets fielded the 4th Battalion of 29th Light Tank Brigade, which was the first unit of the Red Army to roll into the city. The Soviet and German generals paid homage to each other's armies and their respective victories over Polish forces.[10]

After the parade, which Niall Ferguson described as amicable,[11] the Germans withdrew to the western bank of the Bug, and the Soviets took control over the city, as well as the rest of Eastern Poland (now Western Belarus and Western Ukraine).

According to a 2008 article in the Russian newspaper Novaya Gazeta, the purpose of the parade was to display the power of the newly formed "Soviet–Nazi alliance" to the whole world.[12] The source also notes that the commander of the Polish forces who defended Brest against the Germans, General Konstanty Plisowski, was arrested by the NKVD, sent to the Soviet prison camp in Starobielsk and later executed in the Katyn massacre.[12]

German–Soviet parades in other Polish cities

Several historic works published in the 1980s-1990s[13] discuss joint military parades of the Red Army and German Wehrmacht in other cities of occupied Poland.

For example, Russian historian Mikhail Semiryaga writes in his 1992 work Secrets of Stalin's diplomacy: "Joint parades with militaries of both countries as participants took place In Grodno, Brest, Pinsk and several other cities (Germans called them "victory parades"). The parade in Grodno was supervised by Kombrig Vasily Chuikov."[14]

Alexander Nekrich writes: "The conclusion of military operations against Poland was marked by joint parades of German and Soviet militaries in Brest and Lwow in the first days of October [1939]."[15]

In later works, Russian historians Mikhail Meltiukhov and Oleg Vishlyov dismiss the parades in other cities and call them "a myth".[16] Vishlev also disputes that the events in Brest were a military parade and call them "ceremonial departure of German forces under the supervision of Soviet representatives".[16]