USS Missouri (BB-63), now a museum ship, docked at Ford Island, Pearl Harbor
This article is about its current operations as a military base. For civil airport use of this facility, see Honolulu International Airport.

Joint Base Pearl Harbor-Hickam is one of twelve joint bases that were created as a result of the 2005 Base Closure and Realignment Commission.

It is part of Navy Region Hawaii and provides Navy and joint operations Base Operating Support that is capabilities-based and integrated.

Naval Station Pearl Harbor provides berthing and shore side support to surface ships and submarines, as well as maintenance and training. Pearl Harbor can accommodate the largest ships in the fleet, to include dry dock services, and is now home to over 160 commands. Housing, personnel, and family support are also provided and are an integral part of the shore side activities, which encompasses both permanent and transient personnel.

Because Pearl Harbor is the only intermediate maintenance facility for submarines in the Middle Pacific, it serves as host to a large number of visiting submariners.

The Naval Computer and Telecommunications Area Master Station, Pacific, (NCTAMS PAC), Wahiawa, Hawaii is the world's largest communication station. The headquarters site of this shore command is located in the central section of the island of Oahu, approximately three miles north of Wahiawa.

As part of the 2006 Quadrennial Defense Review, the Navy announced in early 2006 that it would shift 60% of its attack submarines to the Pacific by 2010.

Missouri was ordered in 1940 and commissioned in June 1944. In the Pacific Theater of World War II she fought in the battles of Iwo Jima and Okinawa and shelled the Japanese home islands, and she fought in the Korean War from 1950 to 1953. She was decommissioned in 1955 into the United States Navy reserve fleets (the "Mothball Fleet"), but reactivated and modernized in 1984 as part of the 600-ship Navy plan, and provided fire support during Operation Desert Storm in January/February 1991.

Missouri received a total of 11 battle stars for service in World War II, Korea, and the Persian Gulf, and was finally decommissioned on 31 March 1992, but remained on the Naval Vessel Register until her name was struck in January 1995. In 1998, she was donated to the USS Missouri Memorial Association and became a museum ship at Pearl Harbor, Hawaii. 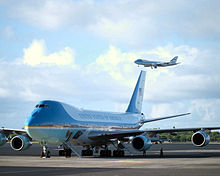 Air Force One (in air) and its backup on the ground during a 2003 visit by George W. Bush

Hickam Air Force Base was named in honor of aviation pioneer Lt Col Horace Meek Hickam. It is under the jurisdiction of Pacific Air Forces (PACAF), which is headquartered on the base.

In 2009 the base was used as the temporary operating location for Air Force One during Barack Obama's Christmas vacation at Kailua, Hawaii.[3]

Media related to Joint Base Pearl Harbor-Hickam at Wikimedia Commons