The National Woman Suffrage Association (NWSA) was formed on May 15, 1869 in New York City.[1] The National Association was created in response to a split in the American Equal Rights Association[2] over whether the woman's movement should support the Fifteenth Amendment to the United States Constitution.[3] Its founders, Susan B. Anthony and Elizabeth Cady Stanton, opposed the Fifteenth Amendment unless it included the vote for women.[4] Men were able to join the organization as members; however, women solely controlled the leadership of the group.[5] The NWSA worked to secure women's enfranchisement through a federal constitutional amendment.[3] Contrarily, its rival, the American Woman Suffrage Association (AWSA), believed success could be more easily achieved through state-by-state campaigns.[2] In 1890 the NWSA and the AWSA merged to form the National American Woman Suffrage Association (NAWSA).[6] 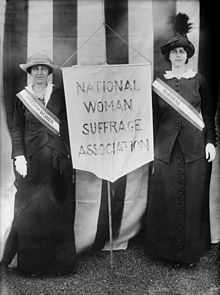 The split of the suffrage movement

Although the harbingers of dissent within different factions of the woman suffrage movement may be seen in the National Woman's Rights Convention of 1860 (the last national convention before the outbreak of the war, woman's rights activism largely ceased during the Civil War. The movement re-emerged to the national scene in 1866 to organize formally under a new name - the American Equal Rights Association (AERA) - and defined by a new platform.[7] Confronted by the proposal of the reconstruction amendments, which introduced the word "male" to the United States Constitution, the AERA eventually dissolved over whether suffrage for emancipated slaves and women would be pursued simultaneously.[7] The schism was cemented by the decision of Republican lawmakers and their former abolitionist allies that this was "the Negro's hour," leaving woman suffrage to be deferred to a more opportune moment.

Following the May 1869 American Equal Rights Association convention, Elizabeth Cady Stanton and Susan B. Anthony established the National Woman Suffrage Association (hereby referred to as "the National").[4] Feeling misguided and deceived, Stanton and Anthony resorted to such bold action largely due to their belief that the preponderance of men composing the AERA leadership had betrayed women's interest.[2] In addition to a feeling of betrayal, deep differences between the factions of the movement centered on numerous issues. The most important of which focused on how AERA funds were to be used, and whether the reconstruction amendments should be supported despite their failure to include women.[8]

In response, Lucy Stone, Henry Blackwell, Julia Ward Howe and Wendell Phillips among others established the American Woman Suffrage Association in September of that year in Boston. The death knell had rung upon the American Equal Rights Association.[7] 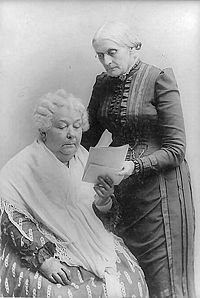 Unlike the American Association who held their conventions in various cities across the country, the National Association held its annual conventions in Washington D.C. with its efforts concentrated on the federal government.[6] Although focused on national reform, the National established its headquarters in New York City, seeking to mobilize support among wage-earning women. The National Association was centralized and unitary in structure, as opposed to the more stringent delegate system of the American Association. Feeling slighted by the apostasy of men under the American Equal Rights Association, the National Association granted full membership rights for women only.[4] Men could affiliate with the organization, however, women solely controlled its leadership.[5] By the same token, Stanton and Anthony were willing to work with anyone, despite their view on other matters, as long as they wholeheartedly championed woman rights and suffrage. As a result, the National Association was often perceived as radical, unorthodox and aggressive.[2] Such drastic measures included using racist appeals to win allies among Democrats.[4] The National, however, often condemned both those Republicans and Democrats who ignored the suffrage question.[2]

In 1883, Elizabeth Cady Stanton and the officers of the National adopted a new Constitution of the National Woman Suffrage Association.[10] It consisted of the five following articles:[9]

As stated in the fifth article, state, district and town woman's suffrage associations were welcomed to become auxiliaries. According to the "Plan For Organization," to organize as a group, a convention of the region must be called by the Vice-President of the state and the Advisory Counsel of each state where the officers would be chosen in coordination with the National's rules.[11]

In founding the National Association, Stanton and Anthony regarded woman's rights as a broad cause, in which the franchise was of primary importance. The organization, however, advocated a broad platform in supporting the individual liberties of women.[11] As Eleanor Flexner explains, "It [the National] was willing to take up the cudgels for distressed women whatever their circumstances, be they 'fallen women,' divorce cases, or underpaid seamstresses."[11] The broad focus espoused by the National Association allowed it to address a diverse array of social, economical and political issues.

In advocating for a federal amendment to assure women the ballot, the National relied on a natural rights argument. The National adopted the constitutional argument put forth by Francis and Virginia Minor at the Missouri Woman Suffrage Convention in St. Louis in October 1869. Using a constitutional interpretation that used language and directly derived from the Fourteenth Amendment, the Minors argued that women had the right to suffrage because they were citizens. Other general arguments Stanton and the National exercised included points that women were taxed without representation, governed without their consent, and tried and punished without a jury of their peers.[7]

The National brought the constitutionality of denying the franchise to the national limelight by printing Minor's resolutions in its periodical, The Revolution. At the time of the National Association's Washington Convention of 1870, ten thousand copies of Minor's resolutions were circulating around the audience, with copies placed on every member's desk in Congress.[7] In adopting such ideology, officers of the National Association soon began to later their speeches, resolutions and hearing before Congress. They also made diverse attempts to vote in various states across the country.[7]

During its short life, The Revolution, the weekly newsletter of the National Association, frequently urged reforms to benefit workingwomen.[5] Supported by financier George Train, editor David Melliss and managed by Anthony, The Revolution paraded the motto: "Men, their rights and nothing more; women, their rights and nothing less!"[2] The weekly sixteen-page paper reported news not found elsewhere, such as the organization of women typesetters, of the first women's clubs, and of women abroad.[2] The Revolution for a short time gave the National a forum, focus and direction. The newsletter, moreover, reflected the broad agenda of the organization. As Eleanor Flexner elaborates, for instance, The Revolution "exhorted women to equip themselves to earn their own livelihood, to practice bodily hygiene in the matter of fresh air, dress, and exercise."[2] On January 8, 1870 - the anniversary of the founding of The Revolution - the American Association launched its periodical, The Woman's Journal.[2] Faced with rising debts, and the rising popularity of The Woman's Journal, The Revolution succumbed in May 1870.[2]

In the summer of 1876, the nation celebrated its Centennial with a highly anticipated exposition in Philadelphia, the first of its kind in America. Opening headquarters in Philadelphia, the National Association sought to use the occasion to draw attention to the inequitable position of women, as well as to organize women from all over the country to exchange their knowledge and experiences.[2] When Richard Henry Lee of Virginia, the presiding officer of the July 4th exposition, finished reading the Declaration of Independence, the ladies walked down the aisle and approached the stage where Anthony made a brief speech.[5] Members of the National then presented the presiding officer with a Women's Declaration of Rights.[8] The Women's Declaration of Rights listed the natural rights protected by the government as part of the social contract and went forth to state that the government was infringing upon those rights. In response, the authors listed nine rights for women labeled "Articles of Impeachment." These articles referenced the ways in which women were oppressed and wronged and asked the government to give women the civil and political rights guaranteed to them.[12]

One year later at the National's Convention of January 1877, the organization continued to carry out bold reform measures. Keeping pressure on Congress, the National drafted a federal amendment calling for woman suffrage - penned by Elizabeth Cady Stanton - that was reintroduced to the Legislature annually until its eventual adoption in 1919.[5] In the same year, furthermore, Anthony led a group of women onto the floor of the United States Senate bearing suffrage petitions with ten thousand signatures.[8] Such efforts signify the extensive efforts of the National Woman Suffrage Association to keep pressure on the federal government to promote the causes concerning women's rights, while bringing the injustice the encountered to national prominence.

In 1890 the National Association and the American Association merged to form the National American Woman Suffrage Association (NAWSA).[6] The merger negotiations between the two organizations began in 1887, dragged for three years, and were finally consummated at a joint convention in February 1890 where the NAWSA nominated Elizabeth Cady Stanton as its first President.[2]