Working with visitors and map in a Visitor Center.

The origin of the term "ranger" dates to the 14th century in England, and was drawn from the word "range" (to travel over a large area). "Rangers" patrolled royal forests and parks to prevent "poachers" from hunting game belonging to the crown.[1] The title "Ranger" in the modern sense was first applied to a reorganization of the Fire Warden force in the Adirondack Park, after 1899 when fires burned 80,000 acres (320 km2) in the park. The name was taken from Rogers' Rangers, a small force famous for their woodcraft that fought in the area during the French and Indian War beginning in 1755. The term was then adopted by the National Park Service[2]

The first Director of the National Park Service, Stephen T. Mather, reflected upon the early park rangers as follows:

They are a fine, earnest, intelligent, and public-spirited body of men, these rangers. Though small in number, their influence is large. Many and long are the duties heaped upon their shoulders. If a trail is to be blazed, it is "send a ranger." If an animal is floundering in the snow, a ranger is sent to pull him out; if a bear is in the hotel, if a fire threatens a forest, if someone is to be saved, it is "send a ranger." If a Dude wants to know the why, if a Sagebrusher is puzzled about a road, it is "ask the ranger." Everything the ranger knows, he will tell you, ex-cept about himself.[3]

After years of concern of pay, the National Park Service and the Office of Personnel Management agreed to consolidate the two series into a single group, to be used only for professional positions and temporary/seasonal positions. The agreement also required that the park service begin using other appropriate technical series for lower paid positions.[4] The Protection Ranger series was changed to "GL"-0025 in 2005.

Beginning in 1985, the service made this adjusment.[clarification needed][citation needed] Today, Park Ranger like duties are handled by a range of employees, wearing the traditional 'green and gray' uniforms, who are not park rangers.[citation needed] These positions include: 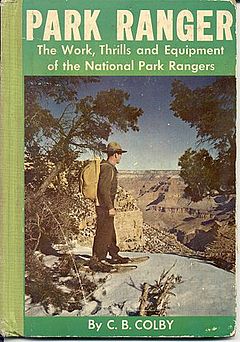 The duties of the modern park ranger are as varied and diverse as the parks where they serve, and in recent years have become more highly specialized - though they often intertwine. Regardless of the regular duties of any one discipline, the goal of all rangers remains to protect the park resources for future generations and to protect park visitors. This goal is accomplished by the professionalism and sometimes overlapping of the different functions and specialties. For example, an interpretive ranger may be trained in and perform fire suppression, emergency medicine, or search & rescue. Law enforcement rangers and other park employees may contribute to the mission of the interpretive ranger by helping park visitors make a personal connection to park resources, and/or appropriately utilize facilities. The spirit of teamwork in accomplishing the mission of stewardship is underscored by the fact that in many cases, the U.S. National Park Service in particular, park rangers share a common uniform regardless of work assignment.

The oldest source of information on Park Ranger Careers was the 1956 Park Ranger by C.B. Colby. At that time, park rangers fulfilled all the demands of park operations from administrative duties to technical rescue. By 1995, Exploring Careers in the National Parks by Bob Gartner reflected the specialization of duties and the expansion of titles covering the same work as was being done in 1956. In the 21st century Live the Adventure showed the park ranger profession was only becoming more complex.

The federal Office of Personnel Management sums up the diversity of the official "Park Ranger Series" of professional white collar occupational groups as follows:

"This series covers positions the duties of which are to supervise, manage, and/or perform work in the conservation and use of Federal park resources. This involves functions such as park conservation; natural, historical, and cultural resource management; and the development and operation of interpretive and recreational programs for the benefit of the visiting public. Duties characteristically include assignments such as: forest and structural fire control; protection of property from natural or visitor related depredation; dissemination to visitors of general, historical, or scientific information; folk-art and craft demonstration; control of traffic and visitor use of facilities; enforcement of laws and regulations; investigation of violations, complaints, trespass/encroachment, and accidents; search and rescue missions; and management activities related to resources such as wildlife, lakeshores, seashores, forests, historic buildings, battlefields, archeological properties, and recreation areas."[7]

NPS Rangers transfer an injured patient during a rescue.

By the 1970s the National Park Service recognized that in order to protect visitors and park resources effectively the service need professional rangers dedicated primarily to law enforcement, emergency medical services, firefighting, and search and rescue. Although some modern NPS Rangers in this specialty ("protection rangers") may be primarily engaged in law enforcement duties, the many varied environments they work in may require these employees to be competent in a variety of public safety skills. Rangers who have received a law enforcement commission wear the standard NPS uniform with the Department of the Interior law enforcement badge. In larger park units search and rescue, emergency medicine, and other functions may be a branch of the "visitor services" or "protection" division and may not require a commission. The following list describes the typical duties of a typical protection ranger:

In the last decades of the 20th century the field of resource interpretation began to consciously professionalize itself. This has resulted in the early 21st century with colleges and universities offering coursework and degrees in interpretation.[9][10][11]

Permanent employees are required to complete the National Park Service's curriculum at the Federal Law Enforcement Training Center (F.L.E.T.C.) in Glynco, Georgia, where they attend a lengthy and rigorous law enforcement training program. The permanent Ranger is then assigned a Field Training Park and upon completion returns to their duty station.