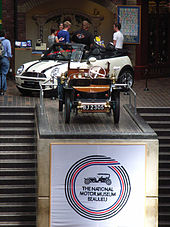 The National Motor Museum (originally the Montagu Motor Museum) is a museum in the village of Beaulieu, set in the heart of the New Forest, in the English county of Hampshire.

The museum was founded in 1952 by Edward Douglas-Scott-Montagu, 3rd Baron Montagu of Beaulieu as a tribute to his father, who was one of the great pioneers of motoring in the United Kingdom, being the first person to drive a motor car into the yard of the Houses of Parliament, and having introduced King Edward VII (then the Prince of Wales) to motoring during the 1890s.

At first the museum consisted of just five cars and a small collection of automobilia displayed in the front hall of Lord Montagu's ancestral home, Palace House, but such was the popularity of this small display that the collection soon outgrew its home and was transferred to wooden sheds in the grounds of the house. The reputation and popularity of the Beaulieu collection continued to grow: during 1959 the museum's "attendance figures" reached 296,909.[1]

By 1964, annual attendance exceeded half a million and a decision was taken to create a purpose built museum building in the grounds of the Beaulieu estate.[2] A design committee chaired by the distinguished polymath-artist Sir Hugh Casson was created to drive the project, and the architect Leonard Manasseh was given the contract for the design of the building.[2]

By 1972, the collection exceeded 300 exhibits.[3] In a ceremony performed by the Duke of Kent the new purpose-built museum building in the parkland surrounding Palace House was opened on 4 July 1972:[4] the name was changed to the National Motor Museum, reflecting a change of status from a private collection to a charitable trust and highlighting Montagu's stated aim to provide Britain with a National Motor Museum "worthy of the great achievements of its motor industry".[4] The opening of the museum coincided with the UK launch of the Jaguar XJ12 which made it an appropriate week for celebrating the UK motor industry.[4] The museum is run by the National Motor Museum Trust Ltd, a registered charity.[5]

An unusual feature of the new museum building in 1972 was a monorail[4] passing through the interior of the building.

Today, in addition to around 250 of the most historically important motor vehicles to have been produced since the late-19th century, including four world land speed record holders, the museum is also home to one of the finest collections of motoring books, journals, photographs, films, and automobilia in the world and is affiliated to the British Motorcycle Charitable Trust.[6]

Among its exhibits are Land Speed Record holders: Malcolm Campbell's 1925 350HP Sunbeam, Henry Segrave's 1927 Sunbeam 1000 hp and 1929 Golden Arrow, Donald Campbell's Bluebird CN7. The yellow Reliant Regal van from the BBC 1 TV comedy Only Fools And Horses, the Mini driven by Mr. Bean in the live-action series, the 1962 'flying' Ford Anglia from the Harry Potter film series and a display of James Bond vehicles are also among the exhibits.

The museum's latest exhibition is World of Top Gear, converted in 2009 from existing exhbition buildings which had been standing since the early 1990s, displaying the actual cars created by Top Gear presenters Jeremy Clarkson, Richard Hammond and James May for some of their most ambitious challenges on the TV show over the years.

The museum also hosts a collection of the well-known Rolls-Royce radiator mascot - the Spirit of Ecstasy - also known as the Flying Lady. The collection features The Whisper, a figurine commissioned by John Walter Edward Douglas-Scott-Montagu to his friend Charles Robinson Sykes who sculpted a personal mascot for the bonnet of his Rolls-Royce Silver Ghost. Sykes originally crafted a figurine of a female model, Eleanor Thornton, in fluttering robes, pressing a finger against her lips - to symbolise the secret of the love between John and Eleanor, his secretary. The figurine was consequently named The Whisper.

Additional attractions include a monorail, veteran bus ride, rally-car simulator ride, go-karting rink, playground, restaurant and a substantial part of the Palace House and grounds, including the partially ruined Beaulieu Abbey, providing a full day out. Among the monastery buildings to have been preserved are the domus (now used for functions and exhibitions), and the refectory, which is now the parish church.

The National Motor Museum is one of several attractions on Lord Montagu's Beaulieu estate which are marketed jointly as "Beaulieu". One admission ticket includes the following attractions: