The National Mining University (Ukrainian: Національний гірничий університет), colloquially known in Ukrainian as NGU (Ukrainian: Національний гірничий університет - НГУ) is located in Dnipropetrovsk, the third most populous city in Ukraine. It was founded in 1899 as the Yekaterinoslav Higher Mining School[3]. The task of the university then was to provide the mining industry with highly qualified specialists[3], a goal that has continued to direct the university's leadership right up to the present day, although in recent years its academic offer has developed beyond the confines of mining-related subjects. Currently, its structure consists of nine faculties (academic departments). During the Soviet era, NGU was one of the country's top specialised institutions of higher education. It is ranked as one of Ukraine's best universities in many rankings and today attracts a large number of foreign students.

The National Mining University is one of the leading establishments of higher education in Ukraine. According to the ratings of UNESCO it achieved 6th position among the 200 Top universities in Ukraine in 2009.[2] 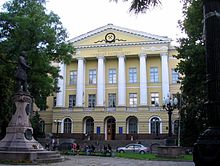 At the University there are 53 departments (27 of which are major-based) united into 9 faculties of full-time education. There is also an Institute of Extramural and Distance Learning and a number of post-graduate and doctoral courses. The university has an Interbranch Institute of Continuing Learning, Scientific and Research Unit, Ukrainian-American Linguistic Center, Linguistic Center, Ukrainian German Cultural Center, Ukrainian-Spanish-Latin-American Center, Center for Ukrainian-Polish Cooperation, and Energy Saving and Energy Management Center. NGU also has links with the Prydniprovsk Science-and-Technology Center of Information Protection, Ukrainian-American Lyceum, Marganets College, Pavlograd Technical School and Motor Transport Technical School.

Currently there are 12,000 students enrolled on programs at the university, whilst post-graduate and doctoral students are taught in 27 modern specialties. The licensed amount of student admission for entering the University each year is 1,400 students. The academic process is provided by 600 teachers including more than 100 doctors of science, professors and 350 candidates of Science and associate professors. The infrastructure of the University (general area of constructions and buildings is 126049 square meters estimated at 29,8 mln. hryvna cost), modern computer basis (more than 1000 modern computers) local and global computer nets, library funds with more than one million volumes, strong material and technical laboratory basis, ensures a high standard of education.

The foundation ceremony of Ekaterinoslav's Higher Mining Technical School (EHMTS) was conducted on October 12, 1899, and in April of the next year construction of the institution's new educational buildings began. To begin with the Higher Mining Technical School had only two departments, those of mining and factory-production, but their academic curricula differed only very slightly (the main difference between the two faculties was to be found in the number of taught hours conducted for students). 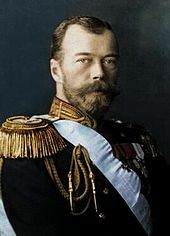 The Yekaterinoslav Higher Mining Technical School was founded during the reign of Nicholas II.

Construction of the Mining Institute in the late 1890s.

From the date of its foundation the university was equipped with a two department library, a mineralogical museum, chemical, mechanical and probe laboratories, and offices for each discipline. Nevertheless the Technical School had a lot of problems for a long time. Ten years after EHMTS establishment there were only 9 teachers, and the stable cadre was constantly decreasing. This made the issue of equalising the Technical School's rights with other higher educational institutions more urgent, and thus eventually the school was turned into the Ekaterinoslav Mining Institute. On June 19, 1912 the State Legislative body adopted a resolution on restructuring the EHMTS into a fully equipped Mining Institute. Since July 1st a number of outstanding scientists, mainly graduates from Saint-Petersburg Mining Institute, then joined the institute.

The institute became well known for its many publications in scientific periodicals. The EHMTS edited and produced the “News of Ekaterinoslav Higher Mining Technical School” since 1905 and up until 1917 the school published 23 collections of “News”, in which around 500 scientific works were published (including monographs and study books).

In 1918 the Mining Institute opened two new departments: surveying (closed in 1921) and Geological Prospecting, and obtained the right to award scientific degrees through public defence of a scientific dissertation. Later, in 1921 the Mechanical Faculty was created with two departments, those of Mining-Factory and Electrical Engineering. The implementation of new specialties was from then on dictated by industrial development. Finally a distance and

In 1930 the Mining Institute began training specialists only for the mining industry and geological prospecting works, and in 1932 a number of new faculties were established in place of the departments: Mining, Electrical Engineering, Geological-Surveying. In the 20s and 30s the process of forming scientific schools was continued, and therefore during the late 1930s the Dnipropetrovsk Mining Institute lost a significant part of its staff (about 30 persons, among which there were a number of outstanding professors),however, the institution withstood these losses and kept preparing highly professional specialists for industry and science.

As a result of the Great Patriotic War in 1941-1945 about 300 teachers, staff members and students left for the front within the first few days of hostilities commencing. The institute evacuated to Sverdlovsk and Karaganda, to where a significant part of its equipment was brought and where its faculty began to work alongside the scientific staff of the Sverdlovsk Mining Institute and the Filial of Moscow Mining Institute, which by that time had come to Karaganda too. A great number of the Dnipropetrovsk Mining Institute's staff occupied engineering positions at mining enterprises of the Urals and Soviet Republics of Middle Asia, working for victory over Nazi Germany. 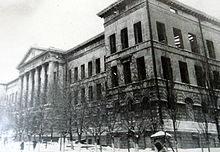 The remains of Dnipropetrovsk's Mining Institute, which was burnt-out by German forces during the Second World War.

The Institute finally resumed its teaching activities in 1943, first in Karaganda, and later in Dnipropetrovsk. However, after the German invasion of the USSR and later Lower Dnieper Offensive, many of the institute's buildings were in ruin and required extensive reconstruction before the staff was able to move its educational activities back into them. After the war, on November 21, 1949 the Dnipropetrovsk Mining Institute was awarded with the Order of the Red Banner and a number of its staff members received high state awards (26 orders and 17 medals) for scientific achievements and success in training engineering and technical staff for the national economy. By 1951/52 academic year all the buildings of the institute had been completely rebuilt, with a new experimental study range for boring, a geological museum, and new laboratories and dormitories being put into use. In 1951 the Mine-Construction Faculty was established.

In 1970 the Dnipropetrovsk Mining Institute employed 474 teachers, including 34 professors. At that time the amount of graduating engineers equaled 1,200 persons and the amount of specialists studying in full-time education was increasing, although part-time and extramural study forms also functioned.

The National Mining University's placing in the annual rankings of universities in Ukraine:

Illych Bondarenko, an NGU professor, in the institute's formal attire.

The faculties of the university are: