American Academy of Arts and Letters

American Academy of Arts and Letters 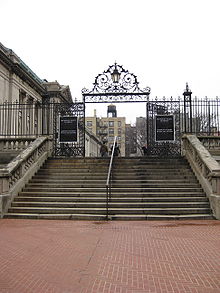 Audubon Terrace, the campus that the academy shares.

The American Academy of Arts and Letters is a 250-member honor society; its goal is to "foster, assist, and sustain excellence" in American literature, music, and art. Located in Washington Heights, a neighborhood in Upper Manhattan in New York, it shares Audubon Terrace, its Beaux Arts campus on Broadway at West 155th Street, with the Hispanic Society of America and Boricua College. The Academy's galleries are open to the public for two exhibitions each year.

The Academy was created in 1904 by the membership of the National Institute of Arts and Letters styling itself after the French Academy. The first seven academicians were elected from ballots cast by the entire membership. They were William Dean Howells, Samuel L. Clemens, Edmund Clarence Stedman, and John Hay, representing literature; Augustus Saint-Gaudens and John La Farge, representing art; and Edward MacDowell, representing music.[1] In 1976 the two groups combined under the name American Academy and Institute of Arts and Letters. In 1992 members adopted the current organizational title.

The oldest organization associated with the group was founded in 1865 at Boston. The American Social Science Association produced the National Institute of Arts and Letters in 1898. The qualification for membership in this body was to have made notable achievements in art, music, or literature. The membership was at first limited to 150. In 1904 the membership was increased by the Institute's introducing a two-tiered structure: 50 elite members and 200 regular members. The people in the elite group were gradually elected over the next several years. The larger group was called the "Institute," while the elite group was called the "Academy."

The strict two-tiered system persisted for 72 years (1904–76). In 1976 members created an organization called the American Academy and Institute of Arts and Letters. The combined Academy/Institute structure had a maximum of 250 living United States citizens as members, plus up to 75 foreign composers, artists, and writers as honorary members. It also established the annual Witter Bynner Poetry Prize in 1980 to support the work of a young poet. The two-tiered system persisted until 1993, when it was completely abandoned.

The Academy holds a Congressional charter under Title 36 of the United States Code (42 USC 20301 et seq.), which means that it is one of the comparatively rare "Title 36" corporations in the United States.[2] The 1916 statute of incorporation established this institution amongst a small number of other patriotic and national organizations which are similarly chartered.[3] The federal incorporation was originally construed primarily as an honor. The special recognition neither implies nor accords Congress any special control over the Academy, which remains free to function independently.[4]

Active sponsors of Congressional action were Senator Henry Cabot Lodge of Massachusetts and former-President Theodore Roosevelt.[5] The process which led to the creation of this federal charter was accompanied by controversy;[6] and the first attempt to gain the charter in 1910 failed.[7] Sen. Lodge re-introduced legislation which passed the Senate in 1913.[8] The Academy was incorporated under the laws of the State of New York in 1914,[9] which factors in decision-making which resulted in Congressional approval in 1916.[10]

Members of the Academy are chosen for life and have included some of the leading figures in the American art scene. They are organized into committees that award annual prizes to help up-and-coming artists.[11] Although the names of some of the members of this organization may not be well known today, each of these men were well known in their own time. Greatness and pettiness are demonstrable among the Academy members, even during the first decade during which William James declined his nomination on the grounds that his little brother Henry had been elected first.[12] One of the giants of the academy in his time, Robert Underwood Johnson, casts a decades-long shadow in his one-man war against encroaching modernism, blackballing such writers as H. L. Mencken, F. Scott Fitzgerald, and T. S. Eliot (before his emigration to England disqualified him for full membership). [13] The former President of Harvard, Charles W. Eliot declined election to the Academy "because he was already in so many societies that he didn't want to add to the number."[14]

Although never explicitly excluded, women were simply not elected to membership in the early years.[15] The admission of Julia Ward Howe in 1907 (at the age of 86) as the first woman in the Academy was only one incident in the intense debate about the very consideration of female members.[16] In 1926, the election of four women – Edith Wharton, Margaret Deland, Agnes Repplier and Mary E. Wilkins Freeman – was said to have "marked the letting down of the bars to women."[17]

Below is a partial list of past members of the National Institute and Academy of Arts & Letters:[18]

Award for Distinguished Service to the Arts

The award, a certificate, and $1,000 goes to a United States resident who has "rendered notable service to the arts".

The academy gives out numerous awards, with recipients chosen by committees made up of Academy members. Candidates for all awards must be nominated by Academy members, except for the Richard Rodgers awards, for which an application may be submitted.