The National Hero of Azerbaijan (Azerbaijani: Azərbaycan milli qəhrəmanı) is the highest national title in the Republic of Azerbaijan. The law on the title has been in effect since December 25, 1995.[1]

The title is awarded for outstanding services of national importance to Azerbaijan in defense and strengthening of the state system and creation of important national values. 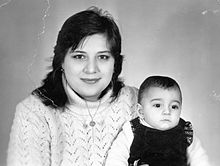 Salatyn Asgarova was one of the Azerbaijani journalists killed in the Nagorno-Karabakh war.

After the break-up of the Soviet Union in 1991, Azerbaijan and Armenia were engaged in the Nagorno-Karabakh War in which several Azerabaijanis were awarded with the of National Hero of Azerbaijan.

Hero of Socialist Labor (Russian: Герой Социалистического Труда, Geroy Sotsialisticheskogo Truda) was an honorary title in the Soviet Union and the highest degree of distinction for exceptional achievements in national economy and culture. It provided a similar status to the title Hero of the Soviet Union that was awarded for heroic deeds, but unlike the latter, was not awarded to foreign citizens.

Heroes of the Soviet Union

Mehdi Huseynzade was an Azerbaijani guerilla and scout during the Soviet-German War.

Israfil Mamedov was the first Azerbaijani to be awarded the title of Hero of the Soviet Union, on December 11, 1941.