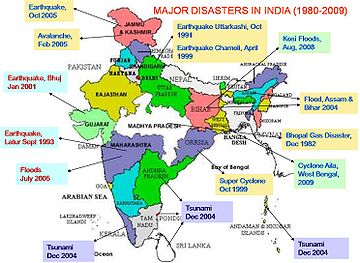 The DM[clarification needed] Act, 2005 has made the statutory provisions for the constitution of the National Disaster Response Force (NDRF) for the purpose of specialized response to natural and man-made disasters.[1][2] According to Section 45 of the Act, the Force has to function under the general superintendence, direction and control of the National Disaster Management Authority (NDMA) and under command and supervision of Director General, NDRF. Though the units of this Force were nominated in 2003, it is only after the establishment of NDMA that their training and equipping were vigorously pursued. In lieu with the Section 44 (i) of the Act that states NDRF a specialist force, the force is gradually emerging as the most visible and vibrant multi-disciplinary, multi-skilled, high-tech force of the NDMA capable of dealing with all types of natural and man-made disasters.

At present, National Disaster Response Force (NDRF) is about constituted of eight battalions, two each from the BSF, CRPF, CISF and ITBP. Each battalion will provide 18 self-contained specialist search and rescue teams of 45 personnel each including engineers, technicians, electricians, dog squads and medical/paramedics. The total strength of each battalion is approximately 1,149.

All the eight battalions are being equipped and trained to combat all natural disasters including four battalions in combating nuclear, biological and chemical disasters.

Raising of two more NDRF battalions at Patna, Bihar and Guntur, Andhra Pradesh has been approved by the Government and NDMA has initiated necessary actions for the same. 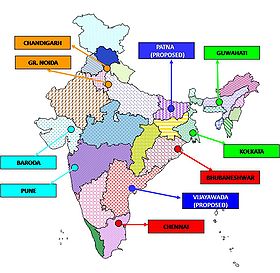 These NDRF battalions are located at nine different locations in the country based on the vulnerability profile to cut down the response time for their deployment. During the preparedness period/in a threatening disaster situation, proactive deployment of these forces will be carried out by the NDMA in consultation with state authorities. The present location of NDRF Bns are as follows:

The vision of the National Disaster Management Authority is to build a safer and disaster resilient India by developing a holistic, proactive, multi-disaster and technology driven strategy for Disaster Management. This has to be achieved through a culture of prevention, mitigation and preparedness to generate a prompt and efficient response at the time of disasters. This national vision inter alia, aims at inculcating a culture of preparedness among all stakeholders.[3]

NDRF has been proved its importance in achieving this vision by highly skilled rescue and relief operations, regular and intensive training and re-training, familiarization exercises within the area of responsibility of respective NDRF Bns, carrying out mock drills and joint exercises with the various stakeholders. 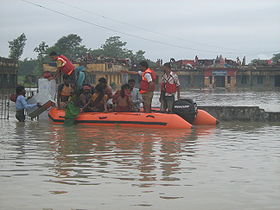 Rescue and Relief Operations during Kosi breach in Bihar. 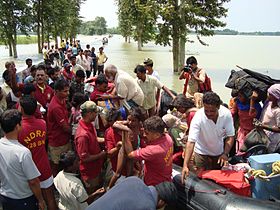 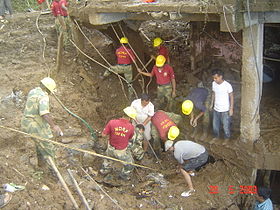 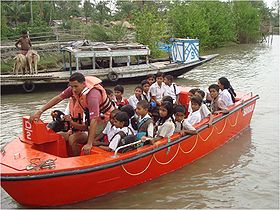 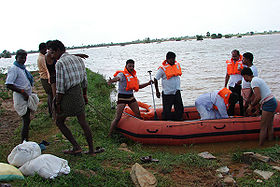 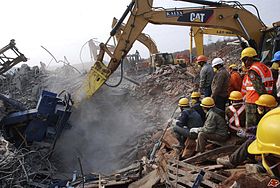 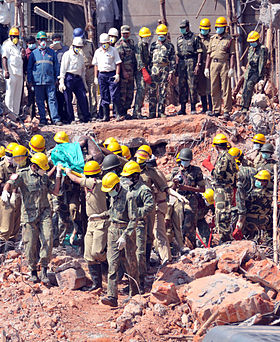 In the previous years, NDRF has proved its efficacy with its commendable performance during various disasters including the drowning cases, building collapses, landslides, devastating floods and Cyclones. NDRF has saved 133,192 human lives and retrieved 276 dead bodies of disaster victims in 73 response operations in the country. Some of the major response operations of NDRF as below:

During the Kosi breach in Bihar in August 2008, which was decleared national calamity by Prime Minister Shri Manmohan Singh,[4][5][6][7] NDRF personnel actively engaged themselves in rescue operations and relief duties on a war footing in districts Supaul, Madhepura, Araria and Purnia. About 780 NDRF personnel trained in flood rescue operations along with 153 high capacity inflatable boats and other rescue equipments were deployed in the flood affected areas. The swift and highly skilled operations of NDRF saved more than 100,000 people trapped in swirling waters of river Kosi.[8] NDRF personnel distributed relief supplies including drinking water to the stranded flood victims.[9] Medical camps were also established to provide medical care to the flood affected people. Impressed with prompt and efficient response of NDRF, Chief Minister of Bihar Shri Nitish Kumar approached Prime Minister Shri Manmohan Singh for a NDRF Bn to be stationed in Bihar[10] and offered 65 acres (260,000 m2) of land at Bihta near Patna.

NDRF commendable rescue operations were no less appreciated during the 2008 floods in Orissa, Maharashtra, Kerala and Assam.

On May 25, 2009 Cyclone Aila hit West Bengal coast with a fury unprecedented in recent history. It took at least 94 lives, seven of them in Kolkata, and affected over 40 lakh people. More than six lakh houses were destroyed completely or damaged partially.[11] NDRF promptly responded to the devastating situation and 600 personnel of NDRF with 84 boats and other rescue equipments started rescue and relief operations at cyclone affected areas of district 24 Pargana North and South of West Bengal.[12][13][14] During the operations NDRF personnel rescued around 2,000 trapped persons and distributed 50 truckloads of relief materials to the affected people.

On Oct 01, 2009 in the wake of worsening flood situations in the States of Andhra Pradesh and Karnataka, the State Government of both the states sent their requests for deployment of National Disaster Response Force (NDRF) for rescue and relief operations. NDMA mobilized 963 flood rescue trained personnel (including some deep divers) and 308 inflatable motorized boats from 05 NDRF Bns located at Arakkonam (Chennai), Pune, Mundali (Orissa), Greater Noida and Bhatinda. and airlifted on Oct 02-03, 2009 in Air Force IL-76 and AN-32 aircraft from nearest Air Force bases and Civil Airports. The rescue personnel deployed in 04 districts of Andhra Pradesh (Kurnool, Vijayawada, Mehboob Nagar and Nandhiyal) and 04 districts of Karnataka (Bagalkote, Raichur, Gadag and Bijapur) and immediately started rescue and relief operations in the flood affected districts of both the states.[15][16][17]

NDRF rescued tens of thousands persons marooned in the floods at these two States and distributed over 40 quintals of food and drinking water. The medical teams of NDRF at these districts administering medical first response and distributing medicines to the flood victims.

On Jan 26, 2010 a five-storied under-construction residential building collapsed at Bellary, Karnataka with about 50 people trapped under the huge debris. 3 rescue teams (102 personnel) of NDRF Bn Pune promptly airlifted to Bellary and NDRF personnel carried out round the clock operation with the help of search & rescue equipments and dogs for 09 days.In the meticulously carried out operation under huge debris the NDRF managed to rescue 20 live persons. The last person was rescued on the 9th day. NDRF also retrieved 27 dead bodies trapped under debris.[18][19][20][21] 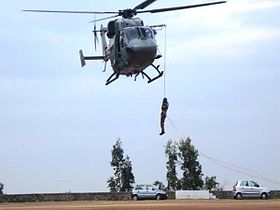 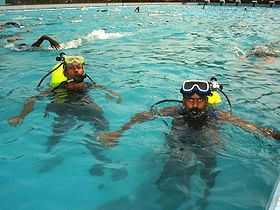 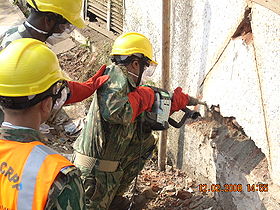 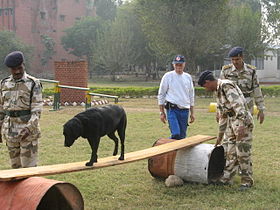 Training of Dogs by Swiss Experts 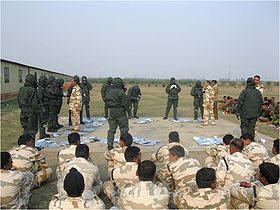 In future, the key to efficient disaster response will depend primarily on effectiveness of training and re-training of Specialised Disaster Response Forces. With this vision, a detailed “Training Regime for Disaster Response” has been prepared by NDMA/NDRF identifying the specific disaster response training courses and devising a unified, structured and uniform course module as well as syllabus for these training courses. The proposition behind a unified, structured, uniform course module and syllabus is that first the entire NDRF battalions will successfully attain these courses and subsequently the State Disaster Response Forces (SDRF) and other stakeholders will be trained on the same lines. The need of uniformly structured course module emerged out of the fact that if all the NDRF battalions and other ‘first responders’ undergo the same training exercise, the coordination between different stakeholders would be expedient and well planned at the time of any major disaster where different NDRF battalions, SDRF battalions and other stakeholders will be working together in close coordination with each other.

While the NDRF is being trained, re-trained and equipped as a specialist force for level three disasters, it is equally important to ensure capacity building of state police personnel who are invariably the first responders in any natural or man-made disasters. To ensure this, a two-pronged strategy is being suggested to the states: firstly, to train state police personnel in the basics of disaster management and secondly, to train at least one battalion equivalent out of their state armed police units as State Disaster Response Force (SDRF) on lines of the NDRF. In addition to police personnel, the SDRFs may be constituted from existing resources of the Fire Services, Home Guards and Civil Defence. NDRF Bns and their training institutions will assist the States/UTs in this effort. The State/ UTs will also be encouraged to set up DM training facilities in their respective Police Training Colleges and include this subject in their basic and in-service courses.

Till the time, 205 police personnel from 21 states of the country have been trained. 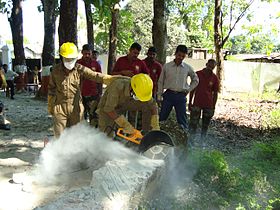 Training being one of the most important attributes for an efficient force, Government of India has recognised the recommendations of the NDMA for setting up an apex National Institute of Excellence for Search and Rescue at a central place like Nagpur to provide training of trainers and to meet other national and international commitments. Also a network of ten outreach centres at the respective NDRF Bns locations are proposed to be set up. 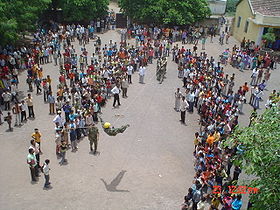 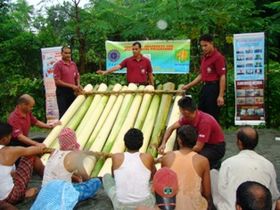 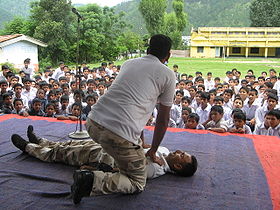 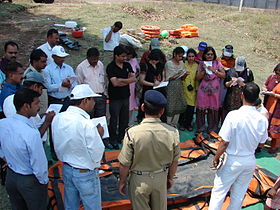 Training the Teachers of Pune University. 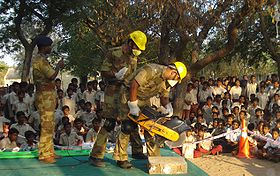 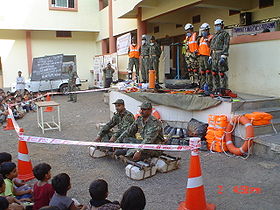 Awareness and preparedness campaigns are key components of proactive approach on Disaster Management. In case of any disaster, the local population is the actual first responder. It may take some time for the district/ state administration to mobilize rescue teams, including police, fire personnel etc. If the local people is properly sensitized about the precautions and preventive actions to be taken in case of any calamity, the loss of life and damage to property can be drastically reduced. Thus, one of the most important tasks of NDRF is to continuously engage themselves in the Community Capacity Building and Public Awareness programmes in a big way which includes training of people (the first responders) and concerned government officials at different levels in the areas with high vulnerability. Along with Community Capacity Building and Public Awareness exercises NDRF is also actively engaged in area familiarization exercises. Such exercises provide first-hand knowledge about the topography, access route to various disaster prone areas, availability of local infrastructure/ logistics which can be used in disaster response operations.

NDRF also conducts regular mock exercises on various disasters like cyclone, flood, earthquake, NBC emergencies, mass causality management etc. Participation in such exercises on the one hand improve the professionalism of NDRF personnel to tackle the real emergency situations and on the other provides an opportunity to interact with various State Government officials and to develop cordial relations with them that can be of great help during response to actual disasters.

Till March 31, 2010 NDRF has trained more than 6.5 lacs community volunteers throughout the country. 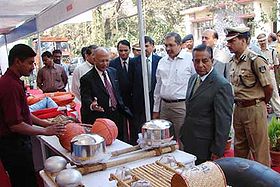 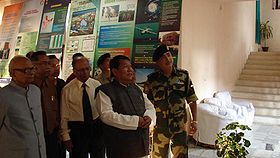 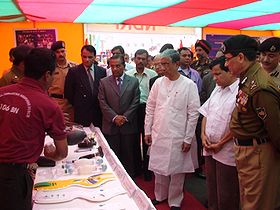 Exhibition on Disaster Awareness at Tripura 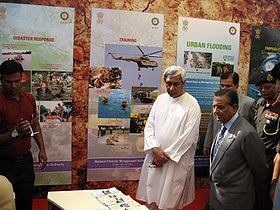 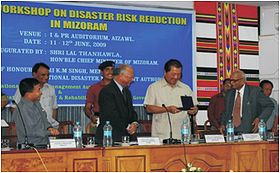 NDRF Bn Pune put up an exhibition of International standard at TechFest 2010 (The annual International Science and Technology Festival of IIT Mumbai) and organized demonstrations on Heli-Rescue, Collapsed Structure Search & Rescue, High-Rise Building Rescue and Dog Show between Jan 22-24, 2010 aimed at generate awareness among the visitors. TechFest 2010 was inaugurated by Gen. N. C. Vij. Hon’ble Vice Chairman, NDMA. This three day event witnessed more than 70,000 visitors, 15,000 participants, nearly 2,000 colleges and approximately 5,000 members of Industry and academia. The exhibition and demonstrations of NDRF were highly appreciated by the visitors.

Some of the important exhibitions organised by NDRF are as below: