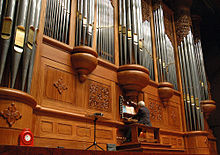 The pipe organ in Taiwan's National Concert Hall was the largest in Asia when installed in 1987.

The National Theater (Chinese: 國家戲劇院) and National Concert Hall (Chinese: 國家音樂廳) are twin performing arts venues in Zhongzheng District, Taipei, Taiwan. Completed in 1987, they are Taiwan's primary national performing arts venues. The landmarks stand, respectively, on the south and north sides of Liberty Square in front of the Chiang Kai-shek Memorial Hall. Together the structures are referred to by the acronym NTCH serving as facilities of the National Chiang Kai-shek Cultural Center. The square itself sits near Ketagalan Boulevard, the Presidential Office Building and National Central Library.

Taiwan's National Theater and National Concert Hall are two of the first major performing arts facilities to be established in Asia. Upon the death of Chiang Kai-shek in 1975, the Kuomintang government authorized the construction of a monument and cultural arts facilities on the grounds of a memorial plaza. The project cost TWD 7 billion.

Yang Cho-cheng and Architects and Engineers Associates were responsible for the overall design. The buildings, though modern in function and purpose, recall traditional elements of Chinese palace architecture. The G+H Company of Germany and Philips, based in The Netherlands, played leading roles in the design of the interior facilities, stage lighting and acoustics. Civil engineering issues were handled by Ret-Ser Engineers Agency (RSEA) and Engineering Corporation. Six directors oversaw the project from initial planning sessions to final completion: Jou Tsuo-Min, Chang Chih-liang, Liu Feng-shueh, Hu Yao-heng, Li Yen and Chu Tzung-ching.

The structures were completed on September 20, 1987, and officially opened their doors the following month as venues of the “National Chiang Kai-shek Cultural Center.” Vice President Lee Teng-hui and Premier Yu Kuo-hua presided over the opening ceremonies for the two buildings on October 31, 1987.

Taiwanese society made a peaceful transition from one-party authoritarian rule to pluralistic democracy in the 1990s. In 1999, the Ministry of Education under the administration of Lee Teng-Hui, Taiwan's first elected president, consolidated the governing bodies of the National Theater and Concert Hall with those of the National Symphony Orchestra, National Chinese Orchestra and National Chorus. In 2004, this larger organization became an autonomous executive juridicial body, the National KCS Cultural Center, headed by an artistic director who reports to a board of directors.

Each structure can host at least two events simultaneously. The National Theater contains a smaller Experimental Theater and the National Concert Hall holds a more intimate Recital Hall. Outdoor performances can be staged simultaneously on the square. The pipe organ by Flentrop Orgelbouw in the National Concert Hall was the largest organ in Asia at the time of its installation in 1987.[citation needed] Both structures house art galleries, libraries, shops, and restaurants. The National Theater houses a Performing Arts Library and publication offices for Taiwan's Performing Arts Review.

National Theater and Concert Hall, like all performing arts venues in capital cities, play diplomatic as well as artistic roles. Guests regularly include top elected leaders in Taiwan as well as international artists and dignitaries. Visitors over the years have included Margaret Thatcher of the UK, Mikhail Gorbachev of the USSR, Lee Kuan Yew of Singapore, Rafael Calderón Muñoz of Costa Rica and former First Lady Betty Ford of the U.S.[1]

Apo Hsu and the NTNU Symphony Orchestra on stage in the Taiwan's National Concert Hall.

Thousands gather outside National Concert Hall to watch the broadcast of a performance inside by Sir Simon Rattle and the Berliner Philharmoniker.

The National Theater and Concert Hall host a constant stream of events by local and international artists each year.