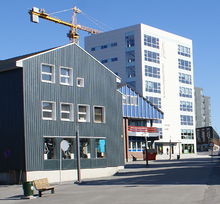 The Bank of Greenland headquarters (right) are located in the Nuuk Centrum.

The Bank of Greenland (Danish: Grønlandsbanken) is the only local commercial bank in Greenland, listed on the Copenhagen Stock Exchange as GRLA,[2] with 2,700 shareholders as of 2010.[3] Headquartered in Nuuk,[4] the bank has 215 employees as of 2010.[3]

The Bank of Greenland was founded on 26 May 1967 by a number of Danish banks, during the era when Greenland was still a province of Denmark. The founding banks were Privatbanken, Danske Bank, Kjøbenhavns Handelsbank, and an organization of local banks, provincial and Copenhagen-based.[5] Operations started in Nuuk on 1 July 1967, while local branches in Ilulissat, Sisimiut, and Qaqortoq followed in 1985, and in Maniitsoq in 1989.[5]

On 8 June 1985 the bank merged with Nuna Bank (formerly Bikuben), with the capital of 120 million Danish krone (DKK), retaining the name of Grønlandsbanken, and becoming the only commercial bank in the country.[5]

The Bank of Greenland provides commercial services, as well as products and services for private customers such as loans, specialized and automated deposits, and property trading and administration. With 20,000 customers,[3] the Bank of Greenland has branches in major towns in Greenland, while bank operations in small settlements are handled via the integrated Post Greenland offices in the Pilersuisoq all-purpose stores.[5]