The National Banking Acts of 1863 and 1864 were two United States federal laws that established a system of national charters for banks, and created the United States National Banking System. They encouraged development of a national currency backed by bank holdings of U.S. Treasury securities and established the Office of the Comptroller of the Currency as part of the United States Department of the Treasury and authorized the Comptroller to examine and regulate nationally chartered banks. The legacy of the Act is its impact on the national banking system as it stands today and its support of a uniform U.S. monetary policy.

For most of the nineteenth century, the American banking system consisted of groups of institutions called "wildcat" banks. These were state-chartered institutions, predominantly located in the West and South, that were known for lax lending policies and issuance of paper currency that was not backed by gold or silver. Holders of this paper could only redeem it (in exchange for specie) at the bank’s office. As each and every bank had its own currency, it was extremely difficult for currency to serve as a means of exchange for inter-regional parties. [1] The Second National Bank of the United States was created to regulate the wildcat banks by tying the amount of currency these institutions could issue to the amount of gold and silver coin they held. When the Second National Bank’s charter expired, wildcat banks resumed unsound and unregulated lending. As Americans began to head West, these institutions began to issue more and more currency as a means of facilitating land speculation. This at-will adjustment of the money supply caused all forms of currency to fluctuate wildly in value. The issuance of currency by multiple banks also led to a nationwide counterfeiting problem that left the public wondering not only how much their money was worth but whether it was real. To solve the problem, the Jackson administration passed an order that voided paper currency in the eyes of the national government—agents of the government were only allowed to accept gold or silver as a means of payment for land. Note holders ran to banks to redeem their currency only to find that banks’ stocks of gold and silver were depleted and banks were no longer extending credit. Currency notes could only be redeemed for a fraction of their nominal value and land investors began to rely on loans from abroad. A wave of bank failures ensued, eventually leading to the Financial Panic of 1837 which included a six year depression. Some banks remained open and continued to issue notes, signaling no distinct end to the paper currency problem.[1] Notes issued by solvent institutions circulated along with currency of insolvent institutions and notes of some smaller, unknown banks even traded at a discount. The currency problem eventually became so bad that a magazine was issued which included photos and descriptions of the various bank notes and information about whether the issuing bank was sound. [1]

In 1846 the Polk Administration created a United States Treasury system that moved public funds from private banks to Treasury branches in an effort to stabilize the economy. However, there remained no national currency. One of the first attempts of the nation to issue a national currency came in the early days of the Civil War when Congress approved the issue of $150 million in national notes known as greenbacks. The government spent a significant amount of money on the war effort which, in turn, drew down its supply of coin. In response, the Legal Tender Act of 1862 was passed. This act mandated that paper money be issued and accepted in lieu of gold and silver coins. The bills were backed only by the national government’s promise to redeem them and their value was dependent on public confidence in the government as well as the ability of the government to give out specie in exchange for the bills in the future. Many thought this promise backing the bills was about as good as the green ink printed on one side, hence the name “greenbacks.” [1]

A "greenback" note issued by the U.S. during the Civil War

The original National Banking Act (ch. 58, 12 Stat. 665; February 25, 1863) was originally known as the National Currency Act and was passed in the Senate by a narrow 23-21 vote. The main goal of this act was to create a single national currency and to eradicate the problem of notes from multiple banks circulating all at once. The Act established national banks that could issue notes which were backed by the United States Treasury and printed by the government itself. The quantity of notes that a bank was allowed to issue was proportional to the bank’s level of capital deposited with the Comptroller of the Currency at the Treasury. To further control the currency, the Act taxed notes issued by state and local banks, essentially pushing non-federally issued paper out of circulation. [2]

The National Banking Act of 1863 was superseded by the National Banking Act of 1864 (ch. 106, 13 Stat. 99; June 3, 1864) just one year later.[1] The new Act also established federally issued bank charters, which took banking out of the hands of state governments. Prior to the Act, charters were granted by state legislatures who were under an immense amount of political pressure and could be influenced by bribes. This problem was resolved to some degree by free banking laws in some states but it was not until this Act was passed that free banking was established on a uniform, national level and charter issuance was taken out of the hands of discriminating and corrupt state legislatures. [2] The first bank to receive a national charter was the First National Bank of Philadelphia, Pennsylvania (Charter #1). The first new national bank to open was The First National Bank of Davenport, Iowa (Charter #15). Additionally, the new Act converted more than 1,500 state banks to national banks. 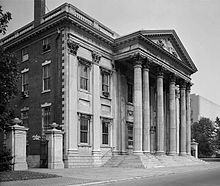 A later act, passed on March 3, 1865, imposed a tax of 10 percent on the notes of state banks to take effect on July 1, 1866. Similar to previous taxes, this effectively forced all non-federal currency from circulation. It also resulted in the creation of demand deposit accounts, and encouraged banks to join the national system, increasing the number of national banks substantially. [1]

The National Banking acts served to create the (federal-state) dual structure that is now a defining characteristic of the U.S. banking system and economy. The Comptroller of the Currency continues to have significance in the U.S. economy as he or she is responsible for administration and supervision of national banks as well as certain activities of bank subsidiaries (per the Gramm-Leach-Bliley Act of 1999). [1]