Williams Deacon's was founded as the joint-stock Manchester & Salford Bank in 1836, becoming a limited liability company in 1881. Williams, Deacon, Labouchere, Thornton & Co., established in 1771 as Raymond, Vere, Lowe & Fletcher, were appointed as London agent and later acquired by the bank in 1890. The renamed Williams Deacon and Manchester & Salford Bank Limited moved their head office from Manchester to London in order to retain Williams, Deacon & Company's membership of the clearing house. [4]

The name was shortened to Williams Deacon's Bank in 1901. In 1930, the bank was purchased by the Royal Bank of Scotland as the basis for its expansion into England.[5] 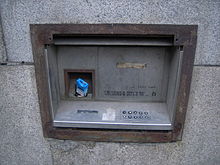 Glyn, Mills & Co. was founded as the private bank, Vere, Glyn & Hallifax, in the City of London in 1753 by Joseph Vere, Richard Glyn and Thomas Hallifax . It first became known as Glyn, Mills & Company in 1851 and later, in 1924, the bank acquired Child & Co. from the 8th Earl of Jersey. Child & Company, founded in the 1580s, remains part of RBS Group Wealth Management today.[6] In 1923, it also acquired the private military bank Holt & Company, founded in 1809, which continued to trade separately until merged into the Drummonds Bank business in 1992.[7][8]

In 1939, the bank was purchased by Royal Bank of Scotland, which became known as the Three Banks Group.[9]

In 1969, National Commercial Bank merged with the Royal Bank of Scotland and, in 1970, the National Bank branches became part of the newly formed Williams & Glyn's Bank, consolidating their interests south of the border.[11] In 1972, Williams & Glyn's and five other banks formed the Inter-Alpha Group of Banks, of which RBS Group remains a member, to exploit opportunities in the then European Economic Community.[12]

In 2000, the Royal Bank of Scotland Group acquired National Westminster Bank in a hostile takeover.[13] In 2009, it was announced that all 311 Royal Bank branches in England and Wales together with the seven Scottish branches of NatWest were to be divested by the troubled Group, possibly under the dormant Williams & Glyn's brand, to comply with European Union state aid requirements.[14][15] The process was expected to take up to four years to complete.[16][17][18][19]

In March 2010, it was reported that the Group had issued a sales memorandum for the business, which would include 318 branches and around £20bn of loans provided to small businesses and households. Following the deadline for initial bids passing on 7 April, Banco Santander, Virgin Money, National Australia Bank, BBVA and the private equity firm JC Flowers were all confirmed to have submitted bids for consideration.[20] It was announced on 3 August, that the Spanish Grupo Santander will pay about £1.65bn for the branches, expected to be rebranded Santander UK, in a deal set to be completed by December 2011.[21]