Abbey National plc was a UK-based bank and former building society, which latterly traded under the Abbey brand name. It became a wholly owned subsidiary of Grupo Santander of Spain in 2004, and was rebranded as Santander in January 2010, forming Santander UK along with the savings business of the former Bradford & Bingley.[1] Before the takeover, it was a constituent of the FTSE 100 Index. 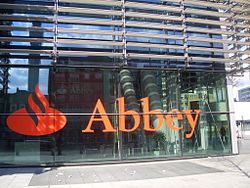 The National Freehold Land Society, officially named the National Permanent Mutual Benefit Building Society to give it legal existence under the Building Societies Act 1836, was established by two Liberal Members of Parliament, Sir Joshua Walmsley and Richard Cobden, in 1849, joined a year later by John Bright. In 1856, it formed the British Land Company, which separated in 1878. Meanwhile, the Abbey Road & St. John's Wood Permanent Benefit Building Society was founded in 1874, based in a Baptist church on Abbey Road in Kilburn. In 1932 the society moved into new headquarters, Abbey House, at 219–229 Baker Street, London, which it occupied until 2002. The site was thought to include 221B Baker Street, the fictional home of Sherlock Holmes,[2][3] and for many years Abbey employed a secretary charged with answering mail sent to Holmes at that address.

During the 1970s and 1980s, Abbey National gained a reputation for innovation and, sometimes disruptive, change. It was an early user of computer systems and in the late 1970s, all branches became on-line to a real-time system that maintained customer accounts. Under Chief General Manager Clive Thornton, new types of savings accounts were introduced as well as a cheque account. The administration of the cheque account was restricted by building society rules and the need to find a partner that could clear Abbey's cheques (The Co-operative Bank). Later, Abbey became a full member of the BACS and APACS. Thornton also acted to break the building societies' interest rate consensus.

In 1989 the Abbey National Building Society demutualised and became a public limited company — Abbey National plc. It was the first of the UK building societies to demutualise, doing so on 12 July. Abbey floated on the London Stock Exchange at £1.30 per share, resulting in an unusually large number of small shareholders — approximately 1.8 million initially. The demutualisation process was marred by the discovery of a large number of undelivered share certificates awaiting destruction at a contractor's premises.

Abbey National shares peaked at more than £14 in 2000, before the stock market began a long decline.[5] 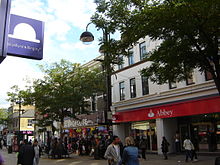 Branches of Bradford & Bingley and Abbey opposite each other on Hounslow High Street prior to the January 2010 rebranding.

In 1994, Abbey National purchased “James Hay” one of the UK’s foremost independent provider of self-administered pensions and is one of the pioneer development of SIPP’s with the launch of the in 1996 of the James Hay SIPP.[6] James Hay then went on to grow in straight and launched Abbey Wrap, the first Wrap a service in which IFA’s can keep the clients ISA’s, Peps, Offshore bonds and SIPP in one place. Abbey Wrap Managers was FSA approved in 2003. This was relaunched as James Hay Wrap in 2005.[7]

Two life assurance companies were demutualised and acquired, Scottish Mutual in 1992 and Scottish Provident in 2001, which enabled Abbey to pursue the bancassurance model.[8]

Abbey also ventured into the wholesale loans business. At first this provided a good profit stream, despite the criticisms of some analysts. This eventually undid the company, however, when Enron turned out to be unsafe and the September 11th attacks in New York damaged confidence in various financial areas. From this point, Abbey struggled from financial losses and a tarnished image. The Chief Executive, Ian Harley, a long-time Abbey employee, resigned and his post was filled by an outsider, Luqman Arnold.[12]

Arnold spearheaded a major reorganisation of the bank in September 2003 that also saw the brand name shortened to Abbey, the abbey.com domain name launched and the Abbey National umbrella logo dropped. Banking literature was also simplified as part of the programme, labelled 'turning banking on its head'.[13]

Just prior to the takeover on 13 July 2004 Richard Chang a risk analyst committed suicide after an interrogation by Kroll Associates. 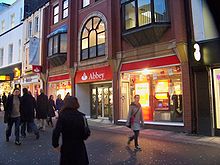 A branch of Abbey on Commercial Street, Leeds showing Santander marketing material in the windows in January 2010.

On 26 July 2004 Abbey National plc and Banco Santander Central Hispano, SA announced that they had reached agreement on the terms of a recommended acquisition by Banco Santander of Abbey. Following shareholders' approval at the EGMs of Abbey (95 per cent voted in favour, despite vocal opposition from most of those present) and Santander, the acquisition was formally approved by the courts and Abbey became part of Grupo Santander on 12 November 2004.[14]

Francisco Gómez Roldán took over as Chief Executive from Luqman Arnold, who received a rumoured £5 million, made up of pay off and share options. Gómez-Roldán died suddenly in July 2006, three weeks before being succeeded by Antonio Horta Osorio.[15]

As a result of the 2008 banking crisis, Abbey purchased the savings business and branches of Bradford & Bingley in September 2008 following the nationalisation of B&B by HM Government.[16] The purchase of Alliance & Leicester by Santander had been agreed earlier that month.[1]

Abbey migrated all customer accounts to the Partenon computer software used by Santander in June 2008.[17]

Grupo Santander announced in May 2009 they would rename Abbey and the Bradford & Bingley branch network on 11 January 2010. Credit cards issued by Abbey were the first to change, using the Santander brand.[1] The Abbey name has been retained for the Abbey for Intermediaries business and was retained for a time for Abbey International. The latter was subsequently rebranded to Santander Private Banking. The Cater Allen, James Hay[disambiguation needed

] and Cahoot brands have remained.[18]

In July 2007 Abbey admitted that errors that it made in the 1980s have contributed to many borrowers mortgage terms being extended by up to 15 years. During this period – which saw considerable turbulence in interest rates – Abbey extended the terms on customers repayment style mortgages without their knowledge.

The Financial Ombudsman Service has stated that Abbey customers may be eligible for compensation.[22]

Abbey's registered office was in London (built on the site of the former Thames Television studios in Euston Road) and its main corporate centre in Milton Keynes. Its savings and banking administration departments are in Bradford, with mortgage centres in Thornaby-on-Tees and Whiteley (which is due to close later in 2010).[23] Abbey currently has Banking Contact Centres in Belfast, Glasgow, Sheffield, and Bootle. Business Banking operations, both administrative and telephony, are also based in Glasgow, having been moved from Taunton and Newport early in 2005.

Abbey previously operated contact centres in Derby, Liverpool and Gateshead. The Derby and Liverpool centres were closed as part of a cost cutting exercise. Those jobs moved to Bangalore and Pune, India, in 2003 (these closed August 2011). Following the takeover by Banco Santander, the Gateshead operations also closed in March 2005. Investments were previously branded as Inscape but were renamed Premium Investments in late 2008, provided by Santander Portfolio Management.[24] This was subsequently subsumed into the more general telephony operations and the original contact centre based in Billericay was closed in April 2009.