The East Rhine Railway (German: Rechte Rheinstrecke, literally 'right (of the) Rhine railway') is a major, double-track, electrified railway line, running along the right bank of the Rhine from Cologne to Wiesbaden. The 179-kilometer (111.2 mi) -long line forms two Deutsche Bahn routes. Route 465 extends from Cologne to Koblenz, via Troisdorf, Bonn-Beuel, Unkel, and Neuwied. From Koblenz, Route 466 extends to Wiesbaden, via Rüdesheim am Rhein. Together with the Taunus railway (Route 645.1), Route 466 is part of Regional-Express line RE-10 of the Rhine-Main Transport Association, which runs from Frankfurt to Koblenz.

With the Cologne-Frankfurt high-speed railway and the Sieg Railway, the East Rhine Railway forms a six-track line between Cologne-Porz and Troisdorf. It includes two tunnels between Rüdesheim and Lahnstein, including the well-known Loreley Tunnel near Sankt Goarshausen.

Soon after the opening of the first railways in the region, a line on the right bank of the Rhine began to be discussed. In 1844 the Mayor of Deutz suggested building a line from Deutz via Rüdesheim to Wiesbaden. In 1852, the town of Neuwied also began to press strongly for the building of a railway. However, others, particularly Prussia, had substantial reservations. There were military objections to a railway line along the Rhine (the extension of the West Rhine railway past Rolandseck was similarly delayed). In particular, the Prussian military objected that the suggested route would pass close to the Ehrenbreitstein Fortress in Koblenz. Therefore in 1853 the Prussian War Ministry declared itself against the line.

Building of the southern section

For the Duchy of Nassau such considerations had less weight than the economic advantages. Therefore it gave the Wiesbaden Railway Company (Wiesbadener Eisenbahngesellschaft) a concession to build the East Rhine line on Nassau national territory. On 11 August 1856, the first section of the Nassau Rhine Railway (Nassauische Rheinbahn) was opened from Wiesbaden to Rüdesheim. Because of the difficult nature of the construction, the Nassau government took over construction in 1858, establishing the Nassau State Railway in 1861. As a result the line was not extended to Oberlahnstein until 22 February 1862 and Niederlahnstein until 3 June 1864. From 1862 to 1900 the Bingerbrück–Rüdesheim train ferry operated between Bingerbrück and Rüdesheim, connecting the East Rhine lines and the Nahe Valley Railway.

The construction of the Sieg Railway from Deutz to Giessen (which started in 1859) enabled Nassau to negotiate with Prussia over the continuation of the line, since the planned Sieg line passed through the Dillenburg district, which was part of Nassau. Finally in 1860 an agreement between both states was concluded, which allowed Prussia to build the Sieg line. In return Prussia agreed to build the Pfaffendorf Bridge, which connected the line near Niederlahnstein with the West Rhine Railway (Linke Rheinstrecke) in Koblenz finished the year before. The bridge was inaugurated on 3 June 1864. A continuation of the East Rhine line through Prussia was not possible for the time being, because the concession that the Rhenish Railway had received for the West Rhine line had specified that no concession would be given for a railway on the right bank of the Rhine before 1876.

Building of the northern section

As a result of the Austro-Prussian War of 1866, Nassau became part of Prussia, changing the situation in the Rhine completely. The Rhenish Railway Company (Rheinische Eisenbahn-Gesellschaft) now had an interest in completing the East Rhine line, and soon received a concession for it. On 27 October 1869, the extension of the line was opened from Niederlahnstein to Neuwied. 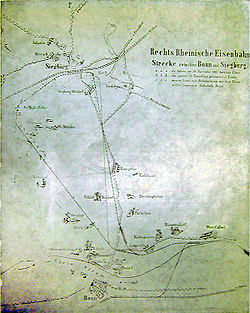 Planning options considered for the East Rhine line between Beuel and Siegburg. The curved route via Friedrich-Wilhelms-Hütte was built.

The route of the northern end was contentious. The concession referred to a line between Siegburg and Niederlahnstein and under the original plans the line should have turned at Beuel on the Rhine to Siegburg. Later the line should have been extended via the Agger River valley to Overath and then via Witten to Bochum, or alternatively Essen. These plans were, however, viewed critically in Cologne, since it would have involved the construction of a major traffic axis through the Bergisches Land near Cologne. Gustav von Mevissen, president of the Rhenish Railway, preferred a route via Troisdorf and Opladen to Essen.

Emil Langen, board member of the Rhenish Railway and director of Friedrich-Wilhelms Ironworks in Troisdorf (now the location of the suburb and station of Troisdorf-Friedrich-Wilhelms-Hütte), finally implemented a change in the planned route north of Beuel. The new route went northeast from Beuel, crossing the Sieg river at Menden (now part of Sankt Augustin). A station would be built at the Friedrich-Wilhelms works and the line would then turn southeast to parallel the Sieg Railway to Siegburg.

On July 11, 1870 the section of line was opened from Neuwied to Oberkassel, where the Bonn–Oberkassel train ferry provided a connection between the West Rhine and East Rhine lines. In addition, the line from Friedrich-Wilhelms-Hütte to Siegburg had already been completed; the complete opening of the line only awaited the completion of the Sieg bridge. During the Franco-Prussian War, the line was of great strategic importance as a supply route. As a result the building of the Sieg bridge was accelerated with extra workers, starting in the late summer of 1870. The whole route was opened on March 1, 1871. At the same time a branch was opened from Friedrich-Wilhelms-Hütte to Troisdorf and the line to Cologne, which would later become the main line.

Map of railway lines in the Koblenz area

In 1878/79, the Horchheim rail bridge was built south of Koblenz, creating a further connection between the West Rhine and East Rhine lines.

All three bridges were destroyed in World War II. Only the Kronprinz-Wilhelm Bridge was rebuilt, as the Urmitz railway bridge, in 1954.

In 1961, during the electrification of the line, new single-line tunnels were built parallel to the existing double-line Loreley and Rossstein tunnels. The old tunnels were then converted to single-line operations and electrified.

With the opening of the Cologne-Frankfurt high-speed rail line at the end of 2002, Troisdorf station was completely rebuilt and the connections from the East Rhine railway towards Siegburg were removed. 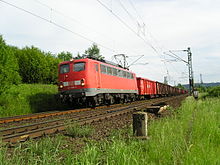 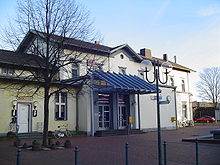 The line is heavily congested and gives priority to long-distance freight trains. Long distance passenger trains in the Rhine Valley use the West Rhine line and the Cologne-Frankfurt high-speed line. When there are line closures on the left side, the long-distance trains are diverted to the East Rhine route. It that case the stop for Bonn is replaced with Bonn-Beuel.

Passenger services on the line are provided by RegionalBahn and Regional-Express trains. According to Deutsche Bahn timetables, the East Rhine route is KBS 465 (Cologne-Koblenz) and KBS 466 (Koblenz-Wiesbaden). The KBS 465 added a section from Cologne to Mönchengladbach a few years ago. All passenger trains start or finish at the Koblenz main station. Trains from there in the direction of Wiesbaden cross on the Horchheimer Bridge (south of Koblenz). Trains travelling in the direction of Cologne cross the Urmitz Railway Bridge (north of Koblenz), or travel via Vallendar over the Horchheimer Bridge.

The northern section is also served hourly by the Rhein-Erft-Express (RE-8) and the Rhein-Erft-Bahn (RB-27) lines. The RE-8 serves the Cologne/Bonn Airport station and extends south of Koblenz on the Horchheimer Bridge. It uses Series-425 electric locomotives and a maximum speed of 140 km/h. The RB-27 operates between Porz and Koblenz, crossing from the north via the Urmitz Bridge. It operates non-stop from Koblenz to Cochem twice daily. The RB-27 uses Series-143 electric locomotives and three double-decker carriages with a maximum speed of 120 km/h. From Moenchengladbach to Rommerskirchen, the tariffs of the Verkehrsverbund Rhein-Ruhr (VRR) apply; from Grevenbroich to Neuwied, those of the Verkehrsverbund Rhein-Sieg (VRS); and from Unkel to Koblenz, the tariffs of the Verkehrsverbund Rhein-Mosel (VRM).

The southern section is also served by the Loreley (RB-10) and Loreley Express (RE-10) rail lines, using electric Series-143 or -110 locomotives and 4-5 coaches on a one to two-hour schedule. Between Koblenz and Kaub, tariffs of the Verkehrsverbund Rhein-Mosel apply and between Lorchhausen and Wiesbaden/Frankfurt, the tariffs of the Rhein-Main-Verkehrsverbund (RMV).

It is planned to build two extra tracks from Troisdorf to Bonn–Oberkassel for the extension of line S13 of the Rhein-Ruhr S-Bahn. Construction is due to commence in 2012, with services commencing at the end of 2016.[1][2] One service an hour would continue past Oberkassel to Linz am Rhein.[3]

In 2007, the performances of the Frankfurt-Koblenz section of the Rhein-Main-Verkehrsverbund and Zweckverband Schienenpersonennahverkehr of Rhineland-Palatinate were submitted to a Northern Europe-wide competition. In April 2008, it was announced that VIAS GmbH will take over operations in December 2010.