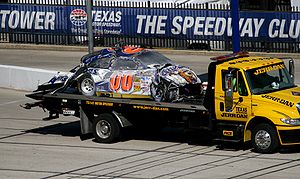 Michael McDowell's Car of Tomorrow after a qualifying accident at Texas Motor Speedway in 2008.

Safety in NASCAR has evolved into one of the biggest concerns in the sport of NASCAR. Mainly after the death of Dale Earnhardt, a seven time Winston Cup Series champion, NASCAR has decided to change all of their safety policies, such as the use of the HANS device. Since 2001, NASCAR has also changed the cars for the Sprint Cup Series and the Nationwide Series. NASCAR's safety policy includes the racing fire suit, carbon fiber seating, and roof flaps.

During a series of deaths of several drivers, NASCAR began researching a new, safer car. After a seven year program, NASCAR presented a design for a new car. The new car, known as the Car of Tomorrow, features a reinforced roll cage. The left side skin has a steel plate for better resiliency in crashes. The roof is four inches higher and two inches wider for safety in rolls. First implemented in the Car of Tomorrow was the separated wing. From 2009-early 2010, the wing was blamed for several flips. Starting in the 2010 spring Martinsville race, the wing was replaced by the traditional spoiler.[1] Also new to the Car of tomorrow, is the stronger smaller fuel cell 17.75 US gallons (67.2 L) for a reduced risk of fires.[2] The windshield is made of Lexan which gains its strength from its flexibility. Under normal circumstances, the glass bends and absorbs the force of the object.[3] Implemented in a limited schedule in 2007, the car was immediately criticized by the drivers for lack of handling.[4] 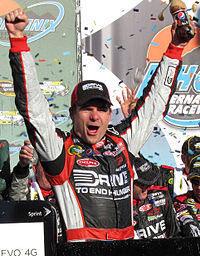 Jeff Gordon and his crew in Team #24 wearing a NASCAR fire suit for safety.

NASCAR drivers are required to wear a fire-retardant suit and underwear. This suit serves a dual purpose of identifying the driver outside the car, and protecting him during a fire. The driver also wears fire retardant shoes and gloves. During long races, the heat of the engine might warm the feet to uncomfortable levels, so most drivers wear a heat shield on the bottom of their shoes.

The helmets serve many safety purposes in the NASCAR circuit. First, the helmet protects the driver from injuries. Second, the helmet has hook-ups for radio to communicate with the spotter and crew chief. Third, the helmets sometimes have visors that reduce the sun's glare so the driver can have better vision.

The seats that the drivers sit in have evolved over the past few years. Most of the seats found in the race cars wrap around the driver's rib cage. This provides some support during a crash, spreading the load out over the entire rib cage instead of letting it concentrate in a smaller area. Some of the newer seats wrap around the driver's shoulders as well, which provides better support because the shoulders are more durable than the rib cage.[5] The introduction of carbon fiber seats has also helped improve safety, as carbon fiber absorbs more energy from an impact than the traditional aluminum seats.

The seat belts used are five- or six-point harness, which have two straps coming down over the driver's shoulders, two straps wrapping around the waist, and one or two coming up between the legs. Since a string of accidents in 2000 and 2001 that killed Adam Petty, Kenny Irwin, Tony Roper and Dale Earnhardt (plus several other drivers in minor circuits) under similar circumstances, NASCAR has made it mandatory for the drivers to wear the HANS device. Though NASCAR allowed another system, the Hutchens device, in the past, since 2005 HANS is the only head and neck restraint device allowed for use.[6] The HANS device reduces the risk of whiplash during a crash. 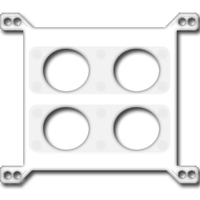 As a safety measure to reduce speeds at the two high-banked superspeedways (Daytona and Talladega), restrictor plates are used. There are some tracks, however, where restrictor plates are not mandated and therefore see faster speeds—specifically Atlanta Motor Speedway and Texas Motor Speedway. While Atlanta is generally considered the fastest track, restrictor plates are not mandated there. In 2004 and 2005, higher qualifying speeds were posted at Texas, earning it the title of the circuit's fastest track. Unrestricted, Sprint Cup cars produce over 750 horsepower (560 kW) and can run at speeds in excess of 200 mph. Rusty Wallace completed a 2004 test for NASCAR at Talladega in which he used an unrestricted motor to complete average lap speeds of 221 mph (356 km/h) and top speeds near 230 mph (370 km/h). 2010 width is 63/64-inch—This is the largest carburetor restrictor plate opening since the one-inch mandate in 1988, the first year the horsepower-reducing plates were used in the Cup Series at Daytona.[7]

Unfortunately, the restrictor plates have an unintended effect on the race. Because of the reduced horsepower of the cars, the cars form large packs. During a race it is not uncommon to see thirty or more lead changes during a race. This also is the source of the Big One. When a driver crashes, usually, he takes that pack with him. During the 2010 Coke Zero 400, the wreck collected 21 of 43 cars. This is a safety concern that has puzzled NASCAR. However, an unexpected consequence of the introduction of the Car of Tomorrow and re-paving of Daytona and Talladega track surfaces has been the separation of the pack into two-car pairs.

In 1994, NASCAR introduced roof flaps to the car, which is designed to keep cars from getting airborne and possibly flipping down the track. Following Rusty Wallace's crash at Talladaga, Penske Racing designed the original roof flaps.[8] NASCAR team owner Jack Roush helped improve on the design of the roof flaps, in conjunction with Embry-Riddle Aeronautical University, Daytona, Florida, USA.[9] During spins, as a result of accidents or loss of handling, as the car rotates it eventually reaches an angle where the oncoming air reacts with the profile of the vehicle in the same manner as a wing. If the speed is high enough air flowing over the car's overall airfoil shape will create sufficient lift to force the car to become airborne. To prevent this, NASCAR developed a set of flaps that are recessed into pockets on the roof of the car. As a car is turned around and reaches an angle where significant lift occurs, the low pressure above the flaps causes them to deploy. The first flap oriented 140 degrees from the centerline of the car typically deploys first. After flap deployment, higher pressure air is forced through an air tube which connects to a second flap, deploying it. This second flap ensures that, should the car continue to spin, no further lift will be created as the vehicles angle changes. The deployment of these flaps eliminates most of the lift on the vehicle. The roof flaps generally keep the cars on the ground as they spin, although it is not guaranteed.[10]

Beginning in 2002 (at Indianapolis), many tracks were retrofitted with SAFER barriers along the walls of the track. These walls absorb the energy of an impact better than concrete walls, while maintaining integrity better than traditional steel barriers. This system costs millions of dollars to install, and the creation of this wall, which connects to the original wall, took many more millions to design and create. Some SAFER barriers were installed in 2003 at Richmond (July), and Homestead, others in 2004 at Talladega, Daytona (July, before 2004 Pepsi 400) and other tracks, in 2005 at Dover and at Watkins Glen in 2010. The Iowa Speedway is the first track that was built with the SAFER Barrier around the entire track.

Pit road safety has become a major focus of NASCAR officials in recent years since the 1990 Atlanta Journal 500, where the rear tire changer for Melling Racing was killed in a pit road crash.

By April 1991, NASCAR implemented the current policy of pit road speed limits. The speed limit depends on the size of the track and the size of pit road. NASCAR uses an electronic scoring system, similar to the VASCAR system, to monitor the speeds of cars on pit road by measuring the time it takes to get from checkpoint to checkpoint. The cars are not equipped with speedometers, therefore during the pre-race warm-up laps, the cars are driven around the track at the pit road speed limit behind the pace car. The drivers then select a gear (usually 2nd gear) and observe and record the corresponding RPM on their respective tachometer.[11]

NASCAR does not allow the use of pit road specific rev limiters as found in most other forms of racing. Allowing a pit road limiter would require the addition of several electronic components into the car, and NASCAR has long opposed the installation of electronics into cars, citing the decline of open wheel racing once technology was introduced.

Since 2002, NASCAR has implemented a rule where all over the wall pit members are required to wear helmets, no visors needed, full fire suits, and gloves; while the gas man must wear a fire apron as well as the suit. While it is not required yet, it is recommended that tire changers wear safety glasses to prevent eye injuries from lug nuts thrown off the car and fuel spills. Some tire changers wear face shields or goggles.

Beginning in 2008, teams in the top three series may not roll a car more than three pit box lengths to push start a car. This prevents teams from pushing a car the length of pit road when the starter motor fails. Also, outside tires that have been removed from a vehicle during a pit stop can no longer be free-rolled from the outside of the pit box to the pit wall; rather, they must be hand-directed to the inner half of the pit box before being released.[12]

As with changes to car models, NASCAR will institute new rules during a season if it deems it necessary to enhance safety.

In contrast with open-wheel, sports car, and touring car governing bodies, NASCAR does not allow race cars to have wing mirrors. Drivers may still use a rear-view mirror and mirrors attached to the roll bar, but no mirror can extend outside of the car. As a result they are left with large blind spots to cope with. In NASCAR’s more prominent series, spotters are used to combat this problem. The spotter’s purpose is to relay information about where cars in these blind spots are to the driver via two-way radio.[13] Spotters also advise drivers on navigating track-obstructing crashes and may relay messages from one driver to another. NASCAR requires spotters at all times a car is on the track, including series in practice, qualifying, and the race. In many cases, a spotter is a former driver.

At some tracks, mostly the road courses, NASCAR mandates multiple spotters at key locations around the track.