Tirumakudalu Narasipura (Kannada: ತಿರುಮಕೂಡಲು ನರಸೀಪುರ Tirumakūḍalu Narasīpura) , commonly known as T. Narasipura,[1] is a panchayat town in Mysore district in the Indian state of Karnataka. The first name refers to the land at the confluence, (trimakuta in Sanskrit) at the confluence of the Kaveri, Kabini and Spatika Sarovara (a mythical lake or spring, also named Gupta Gamini).This is the place in South India where Kumbhamela is held every three years. It finds a mention in the Skanda Purana as one of the Trimakuta Kshetras (holy places with the confluence of three rivers.[2] The word 'Narasipur' is the name of the town, which is derived from the famous Gunja Narasimhaswamy temple that is located on the right bank of the Kabini river. Considered as sacred as Prayag (confluence of the Ganges, the Yamuna and the Saraswati at Prayag – Varanasi - Kashi in North India), it is also known as Dakshina Kashi The town finds mention in tourism guides, both as a tourist place and a pilgrimage centre.

A View of Gunjanarasimhaswamy temple from the confluence point of the Kaveri and Kabini rivers,T.Narsipur

It is said that Tirumakudalu is where Rishi Agasthya had visualised it as 'Dakshina Kashi' long ago. When he travelled down South to Narsipur, the town was a thick forest. Enamoured by the confluence of the three rivers - Kaveri, Kapila and the undercurrent of Spatika Sarovara - he wanted to install a Shiva Linga there and asked Hanuman to get him a linga from Kashi. Since the auspicious period lasting three-and-a-three-fourth of a galige was fast approaching and Hanuman failed to get the linga on time, the sage created a sand linga himself and consecrated it. An insulted Hanuman, who returned soon, cut off the top portion of the sand linga consecrated by Agasthya. From the axed summit, the Spatika Sarovara and is offered as thirtha (holy water) to the pilgrims. The linga that Hanuman brought was consecrated a little distance away and is called the Hanuman Linga. 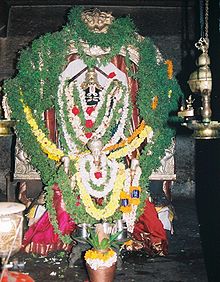 The Someshwara and Markandeshwara lingams in T Narsipur and the Gargeshwara Lingam at Gargeshwari village, along with the Agasthyeshwara and the Hanuman lingam, form the panchalingas of T Narsipur, just like the five lingams at Talakad.

The legend associated with Gunja Narasimhaswamy Temple is that Narasimha appeared in the dream of a washerman telling him that his idol lay beneath the stone on which he washed clothes everyday. The deity told him to build a temple for him and asked him to look for gold coins beneath the stone which could be used for the construction of the temple. When the washerman expressed his wish to visit (Kashi) Varanasi on a pilgrimage, god told him that the construction of a temple for him had earned him (washerman) an additional punya (blessing) of about a gulaganji (seed of a twig tree) than that which accrues by visiting Kashi. Thus, the name tag Gunja came into usage with name of the God Narasimhaswamy.

T. Narasipura and its surrounding areas are prehistoric sites where many Neolithic sites have been unearthed by the Department of Archeology and Museums of Karnataka. The rich and fertile areas of the taluka cultivated by the Kaveri and its tributaries, has been the source of continued uninhibited human habitation, over the centuries, as verified by the ancient archeological evidences discovered in the area. The ancient sites excavated in the late fifties and up to mid sixties (between 1959 and 1965) on the left bank of the Kaveri near the Bhiksheswara Temple, opposite to Narasipura town, which form part of the Upper Kaveri basin, has established the Neolithic phase in the region claiming a date from the first half of second millennium B.C. which saw the gradual evolution of the peasants into food producing and settled communities responsible for the growth of civilization. The systematic ground excavations comprising burial ground remnants, potteries, graffiti, stone implements, metal objects, beads and bangles, animal remains, human remains, wood remains, etc. examined in depth and in great detail have revealed four cultural phases at the sites, but the most outstanding phase has been deduced as the Neolithic phase.

An authoritative report on the “Excavations at T.Narasipur” by Prof M.Seshadri, Director of Archeology of Mysore published in 1971 provides a detailed insight into the ancient pre-historic civilizational bearings of T. Narasipura town and its surroundings.[3]

Tirumakudalu Narasipuru town is the headquarters of the Tirumakudalu Narasipura taluk of the same name (with a 2001 Census population of 279,005) within Mysore District. It is 29 km south-east of Mysore, the district headquarters and 130 km from Bangalore, the state capital. Nearest airport is Bangalore International Airport. Mysore Junction Railway Station and Nanjangud Town Railway Station are the nearest railheads. National Highway 212 passes through the area.

It is a place of religious prominence. The Gunja Narasimha Swamy temple on the right bank of the Kaveri river, is a massive complex belonging to the Vijayanagara period. The image of Narasimha in the sanctum sanctorum has a weighing balance with a twig with seed of the Gunja (botanical name-Abrus precatorius) tree and hence is called Gunja Narasimha Swamy. It signifies the importance of the temple vis-a-vis the Kasi pilgrimage center by a measure of the seedgulaganji. It has inscriptions dating from the Krishnadevaraya period with a mélange of Dravidian and Hoysala Architecture and is renowned for the voluminous records in Nagari script. The temple, which is more than 500 years old, was in need of repair and restoration. It was renovated by a donor - Dr N.V.Ramanuja Iyengar - an NRI from Florida, USA at a cost of over Rs 2.5 crores (about US$ 0.6 million). The Mahakumbhaabhishekam or re-consecration rites of the renovated temple was performed by the donor and his family members from 5 to 9 March 2011.[4]

The chariot festivals of Gunja Narasimha Swamy and Agastheswara, conducted every year, are attended by thousands of people.

The Kumbha Mela of T. Narasipura,[5] of recent origin, since 1989, is an event that occurs once in three years. Organised by the Kumbha Mela Trust under the auspices of senior pontiffs and religious leaders of the State. The congregation is meant to underline the concept of unity in diversity. The Kumbha Mela of Allahabad and Nasik is replicated at T. Narasipura when lakhs of devotees assemble and take a holy dip in the confluence of three rivers. A slice of ancient India unfolds as ochre-clad sadhus join people to take a dip at the confluence of the Kaveri, the Kabini, and the celestial lake "Spatika Sarovara".

Silk Filature at T. Narasipura[6] is a raw silk manufacturing unit. The unit manufactures raw silk yarn and transfer it to its own silk weaving factory located in Mysore. Approximately 1000 Kilograms of cocoons are purchased daily from Govt. Controlled Market depending on needs. Raw silk yarn known as filatures are produced at the factory from the Cocoons The purchase is done on almost a daily basis, as the purchased cocoon cannot be stored for more than 2 to 3 days.

Sand extraction from the river bed is an activity which has caused increased river bank erosion, and frequent public protests are a common feature against this operation.

Somanathapura, about 32 km East of Mysore by road and about 14 km from T. Narsipura, a village on the left bank of the river Cauvery is famous for Sri Venugopalaswamy temple and Sri Channakeshava temple built here in 1269 A.D. & 1268 A.D. by the Hoysala King Narasimha with exquisite carvings. These temples are good examples of the Hoysala architecture and are of great architectural and artistic interest. 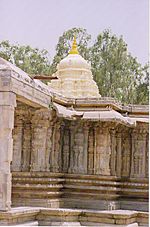 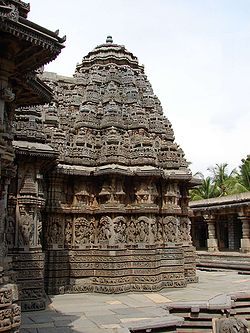 Profile of a Hoysala temple at Somanathapura

Talakad an ancient town, situated on the left bank of the river Kaveri, is 45 km South East of Mysore or 5 km from T.Narsipur. Sri Kirtinarayana, Sri Kartikeya, Sri Vaideeswara, Sri Pataleswara and Sri Maraleswara temples are located in this town. Many more monuments lie buried in the barren expanse of sand dunes in the town.

This place is also tagged to the curse called “Curse of Talakad”[7] by Alamelamma on the Wodeyar dynasty (erstwhile Maharajas) of Mysore. The curse which has survived the folklore of last four hundred years is known thus:

-May Malangi turn into an unfathomed whirlpool

-May Talakad turn into a barren expanse of sand

-May the Rajas of Mysore not have children for all time to eternity!

Sosale is another important religious centre because of the famous Vyasraja mutt of the Madhva sect established there by Vysarajathirtha. It is located about 3 km from T. Narsipura.