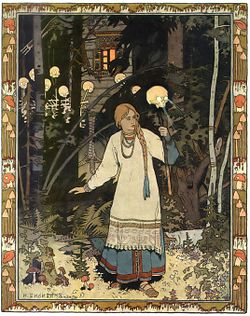 Vasilisa the Beautiful at the Hut of Baba Yaga, illustration by Ivan Bilibin

Russian Fairy Tales (Russian: Народные Русские Сказки, variously translated; English titles include also Russian Folk Tales), is a collection of Russian fairy tales, collected by Alexander Afanasyev and published by him between 1855 and 1863. His work was explicitly modeled after the Brothers Grimm's work, Grimm's Fairy Tales.

Vladimir Propp drew heavily on this collection for his analyses in his Morphology of the Folktale.

Some of the tales included in these volumes: