The Narkomfin Building is a block of flats in Moscow, designed by Moisei Ginzburg with Ignaty Milinis in 1928, and finished in 1932. Only two of four planned buildings were completed. The building is squeezed between old and new territories of United States Embassy at 25, Novinsky Boulevard. A fine example of Constructivist architecture and avant-garde interior planning, it is presently in a dilapidated state; most units were vacated by residents years ago. Proposed reconstruction, in the best case, will retain only exterior walls.

This apartment block, designed for workers at the Commissariat of Finance (shortened to Narkomfin) was an opportunity for Ginzburg to try out many of the theories advanced by the Constructivist OSA group in the course of the 1920s on architectural form and communal living. The building is made from reinforced concrete and is set in a park. It originally consisted of a long block of apartments raised on pilotis (with a penthouse and roof garden), connected by an enclosed bridge to a smaller, glazed block of collective facilities.

As advertised by the architects, the apartments were to form an intervention into the everyday life (or byt) of the inhabitants. By offering Communal facilities such as kitchens, creches and laundry as part of the block, the tenants were encouraged into a more socialist and, by taking women out of their traditional roles, feminist way of life. The structure was thus to act as a 'social condenser' by including within it a library and gymnasium.

On the other hand, architects of 1920s had to face the social reality of an overcrowded socialist city: any single-family apartment unit with more than one room would eventually be converted to a multi-family kommunalka. Apartments could retain the single-family status if, and only if, they were physically small and could not be partitioned to accommodate more than one family. Any single-level apartment could be partitioned; thus, the avant-garde community (notably, Ginzburg and Konstantin Melnikov) designed such model units, relying on vertical separation of bedroom (top level) and combined kitchen and living room (lower level). Ilya Golosov implemented these cells for his Collective House in Ivanovo; Pavel Gofman for communal housing in Saratov (photographs). Ginzburg refined their cell design based on real-life experience.[1]

Narkomfin currently has 54 units, none of them has a dedicated kitchen - at least, legally. Many residents partitioned their apartments to set aside a tiny kitchen. There are five inhabited floors, but only two corridors on second and fourth level (an apartment split between third and second level connects to the second floor corridor, etc.). This is a violation of present-day fire safety codes, exaggerated by the narrow, steep stairs inside apartments and wooden partitions.

Apartments were graded by how far along they were to being 'fully collectivised', ranging from rooms with their own kitchens to apartments purely for sleep and study. Most of the units belong to "Cell K" type (with double-height living room) and "Cell F" connecting to an outdoor gallery. The sponsor of the building, Commissar of Finance Nikolay Alexandrovich Milyutin, enjoyed a penthouse (originally planned as a communal recreation area). Milyutin is also known as an experimental city planner who had developed plans for a linear city.

Le Corbusier, who studied the building during his visits to the Soviet Union, was vocal about the debt he owed to the pioneering ideas of the Narkomfin building, and he used a variant of its duplex flat plans in his Unité d'Habitation. Other architects to have reused its ideas include Moshe Safdie, in his Expo 67 flats Habitat 67 and Denys Lasdun, in his luxury flats in St James', London. The idea of the 'social condenser' was also acknowledged by Berthold Lubetkin an influence on his work.

The Narkomfin Building as Reality

The Utopianism and reformism of everyday life that was behind the building's idea fell out of favour almost as soon as it was finished. After the start of the Five Year Plan and Stalin's consolidation of power, its collectivist and feminist ideas were rejected as 'Leftist' or Trotskyist. In the 1930s, the ground floor, which was originally left free and suspended with pilotis, was filled with flats to help alleviate Moscow's severe housing shortage, while a planned adjoining block was built in the eclectic Stalinist style. The building looks over the US embassy, which has discouraged the inhabitants from using the roof garden. The vicissitudes of the building were charted in Victor Buchli's book An Archaeology of Socialism (Berg, 2000) which takes the flats and their inhabitants as a starting point for an analysis of Soviet 'material culture'. 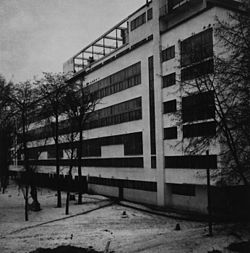 The building has been falling apart for the last three decades, and is now in a grossly dilapidated state, although it is still inhabited in part. There have been various proposals to save the building, which has been under threat of demolition and is an area of particularly lucrative real estate, either by turning it into luxury flats or a hotel. The Narkomfin building is at the top of UNESCO's 'Endangered Buildings' list, and there is an international campaign to save it. It has been on the World Monuments Fund's Watch list of endangered heritage sites three times.

Legally, each apartment unit in the building was privatized (beginning in 1992) by the residents. Later, a real estate speculator has bought out a significant part of these apartments; the rest is still owned and inhabited by the residents (as of now, the consolidated apartment package is owned by MIAN agency). This creates a legal stalemate when the residents are unable to form a condominium and operate the building independently of municipal authorities - thus, the City Hall has nearly absolute control over the future fate of the Narkomfin.

Usually, the city-backed developers have no problems with evicting former residents from the old buildings, especially in case where many residents voluntarily vacated their old apartments. However, public protests against redevelopment of the Narkomfin seemed to stall the reconstruction process indefinitely.

MIAN intends to rebuild Narkomfin into an apartment hotel, and commissioned Alexey Ginzburg, grandson of Moisei Ginzburg, to design the new structure. They expect renovation costs to be under 20,000,000 US Dollars, while the real estate prices in this area approaches 20,000 USD for square meter. Russian code on listed memorial buildings prohibits any major re-planning of internal walls and partitions.

Photos of the house at a Russian forum: