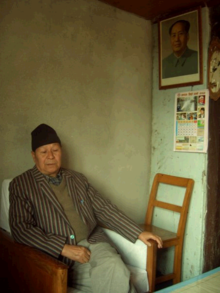 Bijukchhe was born in Sukuldhoka, Nepal. He became a communist sympathizer after seeing the relief work of Communist Party of Nepal cadres during floods in Rautahat around 1954. Around 1956 he joined the Students Federation and became a Communist Party member the following year. Bijukchhe became a prominent figure in the agrarian struggles in the Dhanusa, Parsa and Rautahat districts. In 1961 he became the president of the Students Union at Bhaktapur College.[2][4]

During the 1990s, Bijukchhe was elected to parliament three times, in 1991, 1994 and 1999.[2] In 2006, Bijukchhe was one of the signatories of the historic agreement between the Seven Party Alliance and the Communist Party of Nepal.[5] In the 2008 Constituent Assembly election, Bijukchhe won the Bhaktapur-1 seat with 19,972 votes,[8] Bijukchhe has emerged as a strong critic of the proposal to divide Nepal into ethnic and linguistic states, arguing that such a federalist concept might produce violent conflicts.[4][9] thus having won a seat in all national elections since the 1990 Jana Andolan.[10]

On June 12, 2010 Bijukchhe withdrew his support to the coalition government led by Madhav Kumar Nepal.[11]