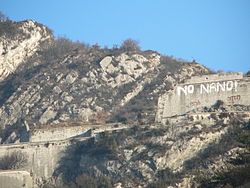 Groups opposing the installation of nanotechnology laboratories in Grenoble, France, have spraypainted their opposition on a former fortress above the city

Nanopollution is a generic name for all waste generated by nanodevices or during the nanomaterials manufacturing process. This kind of waste may be very dangerous because of its size. It can float in the air and might easily penetrate animal and plant cells causing unknown effects. Most human-made nanoparticles do not appear in nature, so living organisms may not have appropriate means to deal with nanowaste. It is probably[who?] one great challenge to nanotechnology: how to deal with its nanopollutants and nanowaste.

Not enough data exists to know for sure if nanoparticles could have undesirable effects on the environment. Two areas are relevant here: (1) In free form nanoparticles can be released in the air or water during production (or production accidents) or as waste by-product of production, and ultimately accumulate in the soil, water or plant life. (2) In fixed form, where they are part of a manufactured substance or product, they will ultimately have to be recycled or disposed of as waste. It is not known yet whether certain nanoparticles will constitute a completely new class of non-biodegradable pollutant. In case they do, it is not known how such pollutants could be removed from air or water because most traditional filters are not suitable for such tasks (their pores are too big to catch nanoparticles).

Of the US$710 million spent in 2002 by the U.S. government on nanotechnology research, only $500,000 was spent on environmental impact assessments. Risks identified by Uskokovic (2007)[2] include: self-replicating nanobots aggressively or through slowly rising supremacy wiping out the whole biosphere; further destabilising the already endangered diversity of the biosphere.

Concerns have been raised about Silver Nano technology used by Samsung in a range of appliances such as washing machines and air purifiers.

To properly assess the health hazards of engineered nanoparticles the whole life cycle of these particles needs to be evaluated, including their fabrication, storage and distribution, application and potential abuse, and disposal. The impact on humans or the environment may vary at different stages of the life cycle.

The Royal Society report[3] identified a risk of nanoparticles or nanotubes being released during disposal, destruction and recycling, and recommended that “manufacturers of products that fall under extended producer responsibility regimes such as end-of-life regulations publish procedures outlining how these materials will be managed to minimize possible human and environmental exposure” (p.xiii). Reflecting the challenges for ensuring responsible life cycle regulation, the Institute for Food and Agricultural Standards has proposed standards for nanotechnology research and development should be integrated across consumer, worker and environmental standards. They also propose that NGOs and other citizen groups play a meaningful role in the development of these standards.

Nanotechnology could potentially have a great impact on clean energy production. Research is underway to use nanomaterials for purposes including more efficient solar cells, practical fuel cells, and environmentally friendly batteries. The most advanced nanotechnology projects related to energy are: storage, conversion, manufacturing improvements by reducing materials and process rates, energy saving (by better thermal insulation for example), and enhanced renewable energy sources.

Another example for an environmentally friendly form of energy is the use of fuel cells powered by hydrogen. Probably the most prominent nanostructured material in fuel cells is the catalyst consisting of carbon supported noble metal particles with diameters of 1-5 nm. Suitable materials for hydrogen storage contain a large number of small nanosized pores.

Nanotechnology may also find applications in batteries. Because of the relatively low energy density of conventional batteries the operating time is limited and a replacement or recharging is needed, and the huge number of spent batteries represent a disposal problem. The use of nanomaterials may enable batteries with higher energy content or supercapacitors with a higher rate of recharging, which could be helpful for the battery disposal problem.

A strong influence of nanochemistry on waste-water treatment, air purification and energy storage devices is to be expected.

Magnetic nanoparticles offer an effective and reliable method to remove heavy metal contaminants from waste water by making use of magnetic separation techniques. Using nanoscale particles increases the efficiency to absorb the contaminants and is comparatively inexpensive compared to traditional precipitation and filtration methods.

Some water-treatment devices incorporating nanotechnology are already on the market, with more in development. Low-cost nanostructured separation membranes methods have been shown to be effective in producing potable water in a recent study.[5]