A nanoflare is a very small solar flare which happens in the corona, the external atmosphere of the Sun.

The hypothesis of "microflares" as a possible explanation of the coronal heating was first suggested by Gold [1] and then later developed by Eugene Parker .[2]

According to Parker a nanoflare arises from an event of magnetic reconnection which converts the energy stored in the solar magnetic field into the motion of the plasma. The plasma motion (thought as fluid motion) occurs at length-scales so small that it is soon dumped by the turbulence and then by the viscosity. In such a way the energy is quickly converted into heat, and conducted by the free electrons along the magnetic field lines closer to the place where the nanoflare switches on. In order to heat a region of very high X-ray emission, over an area 1" x 1", a nanoflare of 1017 J should happen every 20 seconds, and 1000 nanoflares per second should occur in a large active region of 105 x 105 km2. On the basis of this theory, the emission coming from a big flare could be caused by a series of micro-nanoflares, not observable individually.

The observations show that the solar magnetic field, which is frozen into the motion of the plasma in the photosphere, opens into semicirculal structures in the corona. These coronal loops, which can be seen in the EUV and X-ray images (see the figure on the left), confine very hot plasma, emitting as it were at a temperature of a few million degrees.

Many flux tubes are stable for several days on the solar corona in the X-ray images, emitting at steady rate. However flickerings, brightenings, small explosions, bright points, flares and mass eruptions are observed very frequently, especially in active regions. These macroscopic signs of solar activity are considered by astrophysicists as the phenomenology related to events of relaxation of stressed magnetic fields, during which part of the coronal heating is released by current dissipation or Joule effect.

However, at first, astronomers believed that a single event of magnetic reconnection was responsible for very dynamic processes like flares and other phenomena linked to coronal activity. On the other hand, the theory of nanoflares supposes that these events of magnetic reconnection, occurring at the same time on small length-scales wherever in the corona, are very numerous and give only a small fraction of energy. These nanoflares might be very tiny flares, so close one to each other, both in time and in space, to heat the corona and to cause all the phenomena due to solar activity.

The sudden light bursts periodically observed in active regions as well as flares and coronal mass ejections could be provoked by cascade effects, similar to those described by the mathematical theories of catastrophes. In the hypothesis that the solar corona is in a state of self-organized criticality, the stressing of the magnetic field should be enhanced until a small perturbation switches on many small instabilities, happening together as it occurs in avalanches.

One of the experimental results supporting this theory is the fact that the distribution of the number of flares observed in the hard X-rays is a function of the energy, following a power law with negative spectral index 1.8 .[3] [4] [5] [6] If this distribution would have the same spectral index also at lower energies, flares, micro-flares and nanoflares might provide a considerable part of coronal heating. Actually a negative spectral index of the order of 2 is required in order to maintain the solar corona. 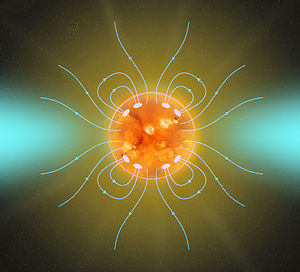 The problem of coronal heating is still unsolved, although many steps ahead have been done in this direction and other evidences of nanoflares have been found in the solar corona. The amount of energy stored in the solar magnetic field can account for the coronal heating necessary to maintain the plasma at this temperature and to balance coronal radiative losses .[7]

The radiation is not the only mechanism of energy loss in the corona: since the plasma is highly ionized and the magnetic field is well organized, the thermal conduction is a competitive process. The energy losses due to the thermal conduction are of the same order of coronal radiative losses. The energy released in the corona which is not irradiated externally, is conducted back towards the chromosphere along the arcs. In the transition region where the temperature is about 104 -105 K, radiative losses are too high to be balanced by whatever form of mechanical heating .[8] The very high temperature gradient observed in this range of temperatures increases the conductive flux in order to supply for the irradiated power. In other words, the transition region is so steep(the temperature increases from 10kK to 1MK in a distance of the order of 100 km) because the thermal conduction from the superior hotter atmosphere must balance the high radiative losses, principally due to the numerous emission lines, which are formed from ionized atoms (oxygen, carbon, iron and so on).

The solar convection can supply for the required heating, but in a way not yet known in detail. Actually, it is still unclear how this energy is transmitted from the chromosphere(where it could be absorbed or reflected), and then dissipated into the corona instead of dispersing into the solar wind. And furthermore, where does it occur exactly: in the low corona or mostly higher, where the magnetic field lines open into the space heliosphere, blowing the solar wind into the solar system?

By now the importance of the magnetic field is recognized by all the scientists: there is a strict correspondence between the active regions, where the irradiated flux is higher (especially in the X-rays), and the regions of intense magnetic field.[9]

The problem of coronal heating is complicated by the fact that different coronal features require very different amounts of energy. It is difficult to believe that very dynamic and energetic phenomena such as flares and coronal mass ejections share the same source of energy with stable structures covering very large areas on the Sun: if nanoflares would have heated the whole corona, then they should be distributed wherever and so uniformly to look like a steady heating. Flares themselves - and microflares, which when studied in detail seem to have the same physics - are highly intermittent in space and time, and would not therefore be relevant to any requirement for continuous heating. On the other hand, in order to explain very rapid and energetic phenomena such as solar flares, the magnetic field should be structured on distances of the order of the metre.

The Alfvén waves generated by convective motions in the photosphere can go through the chromosphere and transition region, carrying an energy flux comparable to that required to sustain the corona. Anyway wave train periods observed in the high chromosphere and in the lower transition region are of the order of 3-5 min. These times are longer than the time elapsed by alfvén waves to cross a typical coronal loop. This means that most of the dissipative mechanisms might provide enough energy only at distances further from the solar corona. More probably, the Alfvén waves are responsible for the acceleration of the solar wind in coronal holes. 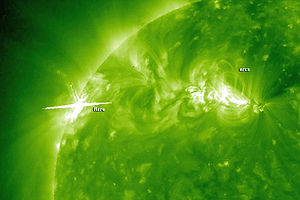 The Ohmic dissipation by currents could be a valid alternative to explain the coronal activity. For many years the magnetic reconnection has been invoked as the main power source of solar flares. However this heating mechanism is not very efficient in large current sheets, while more energy is released in turbulent regimes when nanoflares happen at much smaller scale-lengths, where non-linear effects are not negligible.[10]