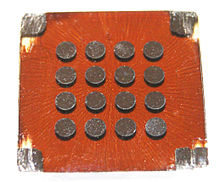 Spin-cast quantum dot solar cell built by the Sargent Group at the University of Toronto. The metal disks on the front surface are the electrical connections to the layers below.

Quantum dot solar cells are an emerging field in solar cell research that uses quantum dots as the photovoltaic material, as opposed to better-known bulk materials such as silicon, copper indium gallium selenide (CIGS) or CdTe. Quantum dots have bandgaps that are tunable across a wide range of energy levels by changing the quantum dot size. This is in contrast to bulk materials, where the bandgap is fixed by the choice of material composition. This property makes quantum dots attractive for multi-junction solar cells, where a variety of different energy levels are used to extract more power from the solar spectrum.

The potential performance of the quantum dot approach has led to widespread research in the field. Early examples used costly molecular beam epitaxy processes, but alternative inexpensive fabrication methods have been developed. These attempts rely on quantum dot synthesis using wet chemistry (colloidal quantum dots – CQDs) and subsequent solution processibility of quantum dots. CQD solar cells currently hold the performance record for quantum dot solar cells. Their efficiency of 5.1% is yet low compared to that of commercial bulk silicon cells (about 17%), but it has a potential for improvement.

In a conventional solar cell, light is absorbed by a semiconductor producing an electron-hole (e-h) pair. This pair is separated by an internal electric field and the resulting flow of electrons and holes creates electric current. The internal electric field is created by doping one part of semiconductor with atoms which act as electron donors (n-type doping) and another with electron acceptors (p-type doping) that results in a p-n junction. Generation of e-h pair requires that the photons of light have energy exceeding the bandgap of the material. Whereas photons with lower energies produce negligible amount of e-h pairs, higher energy photons are relatively inefficient: they produce an energetic e-h pair which quickly (within about 10−13 s) loses its energy through collisions with the lattice ("thermalizes"). As a result, most photon energy is lost into heat that lowers the conversion efficiency of light into electricity. The detailed balance calculation shows that this efficiency can not exceed 31% if one uses a single material for a solar cell.[1]

Numerical analysis shows that the 31% efficiency is achieved when the solar cell material has a bandgap of 1.13 eV, corresponding to light in the near infrared. This band gap nearly matches that of silicon (1.1 eV), one of the many reasons this material dominates solar cell production. It is possible to greatly improve on a single-junction cell by stacking extremely thin cells with different bandgaps on top of each other – the "tandem cell" or "multi-junction" approach. The same basic analysis shows that a two layer cell should have one layer tuned to 1.64 eV and the other at 0.94 eV, with a theoretical performance of 44%. A three-layer cell should be tuned to 1.83, 1.16 and 0.71 eV, with an efficiency of 48%. An "infinity-layer" cell would have a theoretical efficiency of 86%, with other loss mechanisms accounting for the rest.[2]

Traditional silicon preparation methods do not lend themselves to this approach. There has been some progress using thin-films of amorphous silicon, but other issues have prevented these from matching the performance of traditional cells.[3] Most tandem-cell structures are based on higher performance semiconductors, notably gallium arsenide (GaAs). Three-layer InGaAs/GaAs/InGaP cells (bandgaps 1.89/1.42/0.94 eV) hold the efficiency record of 42.3% for experimental examples.[4]

Quantum dots are particles of semiconductor material with the size so small that, due to quantum mechanics considerations, the electron energies that can exist within them are limited. These energy levels, defined by the size of quantum dots, in turn define the bandgaps. The dots can be grown to any needed size, allowing them to be tuned across a wide variety of bandgaps without changing the underlying material or construction techniques.[5] In typical preparations, the tuning is accomplished by varying the duration or temperature of synthesis.

The ability to tune the bandgap is what makes them desirable for solar cell use. In this respect they are similar to the existing expensive GaAs tandem cells, and in theory have efficiencies on the same order. But CQDs can improve this further. In particular, lead sulfide (PbS) CQDs have bandgaps that can be tuned into the far infrared, energy levels that are normally unseen to traditional materials. Half of all the solar energy reaching the Earth is in the infrared, most of it in the near infrared region. With a quantum dot solar cell, IR-sensitive materials are just as easy to use as any other, opening the possibility of capturing much more energy cost-effectively.[6]

Moreover, CQDs are far easier to make than GaAs materials, and in some cases even simpler than traditional silicon. When suspended in a colloidal liquid form they can be easily handled throughout production, with the most complex equipment needed being a fume hood while the solvents outgas. The entire production process takes place at room temperature or on a hotplate, dramatically reducing handling issues and energy input. Although the base semiconductor material might require a complex preparation before being made into dots, even then the material does not have to be produced in large blocks, significantly reducing operational costs. Although current production is limited and the materials are relatively expensive, the price should be significantly reduced in mass production. The dots can be distributed on a substrate through spin coating, either by hand or in an easily automated process. In large-scale production this technique could be replaced by spray-on or roll-printing systems, which dramatically reduces module construction costs.

The idea of using quantum dots as a path to high efficiency was first noted by Burnham and Duggan in 1990.[7] At the time, the science of quantum dots, or "wells" as they were known, was in its infancy and early production examples were just becoming available.

Another modern cell design is the dye-sensitized solar cell, or DSSC. DSSCs use a sponge-like layer of TiO2 as the semiconductor valve as well as a mechanical support structure. During construction, the sponge is filled with an organic dye, typically ruthenium-polypyridine, which provides the electrons.[8] This dye is relatively expensive, and ruthenium is a rare metal.[9] Another drawback of the design is that it requires direct contact between the dye molecules suspended in the film and the rear electrode to return electrons to the dye. In most designs, this is handled by a liquid electrolyte between the two, making the design susceptible to leakage and freezing. Finally, in order for the energy levels to work out, the front electrode has to be transparent. Such electrode is usually made of indium tin oxide (ITO), which is fragile and contains expensive indium metal.

Quantum dots as an alternative to the molecular dyes was considered from the earliest days of DSSC research. The ability to tune the bandgap means the designer can select a wider variety materials for other portions of the cell. The collaborating groups from the University of Toronto and École Polytechnique Fédérale de Lausanne developed a new design based on a rear electrode directly in contact with a film of quantum dots, eliminating the electrolyte and forming a depleted heterojunction. To date these cells have reached reached 5.1% efficiency, comparable to the best solid-state DSSC devices, but still below those based on liquid electrolytes.[10]

During this period, other teams were working with nanocrystals of other semiconductors, notably cadmium telluride (CdTe). A colloidal suspension of these crystals is spin-cast onto a suitable substrate, often a thin glass slide, potted in a conductive polymer. These did not use quantum dots, but had a number of features in common with them. In particular, the method of casting a thin layer of crystals would work just as well as with quantum dots, and the use of a thin film conductor would both be applicable with few changes. In low scale production quantum dots are more expensive to form than mass producing of nanocrystals, but the crystals are based on rare metals that are already subject to major price swings, whereas a wide variety of materials can be used to make suitable dots.

Experiments using a variety of CQDs materials with spin-casting techniques started at the Sargent Group in the mid-2000s. In one noteworthy experiment, the group used lead selenide as an infrared-sensitive electron donor to produce the highest-efficiency IR solar cells ever built. The true advantage of this technique, however, is that it yields the prospect of combining the quantum dots inherent tunability with a simple manufacturing process to allow the construction of "tandem" cells of greatly reduced cost. The cells use a rear layer of gold as an electrode, but recent experiments have shown that nickel works just as well.[11] This would greatly reduce the cost of the system in large-scale production.

Another way to improve efficiency is to capture the extra energy in the electron when emitted from a single-bandgap material. In traditional materials like silicon, the distance from the emission site to the electrode where they are harvested is too far to allow this to occur; the electron will undergo many interactions with the crystal materials and lattice, giving up this extra energy as heat. There was great hope in the 1980s that thin films of silicon or other materials would avoid this, and capture some of this extra energy. These films are amorphous, and in practice the defects that are inherent to these materials overwhelmed this advantage. Modern thin-film cells are generally less efficient than traditional silicon.

In the case of quantum dots, or other nanostructured donors, it is possible to cast cells as uniform films that avoid the problems with defects.[12] These would still be subject to other issues inherent to quantum dots in general, notably resistivity issues and heat retention. It appears there has been little active development along these lines.

In 2005, the National Renewable Energy Laboratory in Golden, Colorado reported a spectroscopic evidence that several excitons could be efficiently generated upon absorption of a single, energetic photon in a quantum dot.[13][14][15] This opens up the possibility of a different approach to the same problems that tandem cells attempt to solve, capturing more of the energy in highly energetic visible photons in sunlight. In this approach, known as "multiple exciton generation" (MEG), the quantum dot is tuned to release multiple electrons at a lower energy instead of one high-energy electron. This increases the cell efficiency. The dots in NRELs example where made from lead sulfide.

In 2010, a team at the University of Wyoming demonstrated similar performance using cells based on the DCCS design. In their examples, PbS quantum dots demonstrated two-electron ejection when the incoming photons had about three times the base bandgap energy.[16]

NREL maintains an active research effort developing silicon-based quantum dots.[17] In order to become cost effective, any new solar cell design will have to compete with the existing silicon industry. Silicon is plentiful and inexpensive in bulk form, it is only the processing that makes it expensive. If quantum dots with suitable properties can be made from silicon, they can compete on a cost basis. In 2007, NREL demonstrated that MEG occurs in silicon quantum dots as well as in the PbS dots.[18]

Although research is still at a pre-commercialization stage, in the future quantum dot based photovoltaics may offer advantages such as mechanical flexibility (as in quantum dot-polymer composite photovoltaics[19]) as well as low cost, clean power generation[20] and an efficiency of 65%.[21]