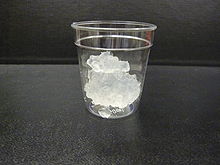 Nanocellulose or microfibrillated cellulose (MFC), is a material composed of nanosized cellulose fibrils with a high aspect ratio (length to width ratio). Typical dimensions are 5–20 nanometers width and length up to 2000 nanometers. It is pseudo-plastic. Moreover, nanocellulose exhibits the property of certain gels or fluids that are thick (viscous) under normal conditions, but flow (become thin, less viscous) over time when shaken, agitated, or otherwise stressed. This property is known as thixotropy. When the shearing forces are removed the gel regains much of its original state. The fibrils are isolated from any cellulose containing source including wood-based fibers (pulp fibers) through high-pressure, high temperature and high velocity impact homogenization (see manufacture below). Nanocellulose can also be obtained from native fibers by an acid hydrolysis, giving rise to highly crystalline and rigid nanoparticles (generally referred to as nanowhiskers) which are shorter (100s to 1000 nanometers) than the nanofibrils obtained through the homogenization route.

The terminology microfibrillated/nanocellulose or (MFC) was first used by Turbak, Snyder and Sandberg in the late 1970s at the ITT Rayonier labs in Whippany, New Jersey, USA to describe a product prepared as a gel type material by passing wood pulp through a Gaulin type milk homogenizer at high temperatures and high pressures followed by ejection impact against a hard surface. The terminology (MFC) first appeared publicly in the early 1980s when a number of patents and publications issued to ITT Rayonier on this totally new nanocellulose composition of matter.[1] In later work Herrick at Rayonier also published work on making a dry powder form of the gel.[2] Since Rayonier is one of the world's premier producer of purified pulps their business interests have always been 1) to create new uses and new markets for pulps and 2) never to compete with new or potentially new customers. Thus, as the patents issued,[3] Rayonier gave free license to whomever wanted to pursue this new use for cellulose. Rayonier,as a company, never pursued scale-up. Rather, Turbak et al. pursued 1) finding new uses for the MFC/nanocellulose. These included using MFC as a thickener and binder in foods, cosmetics, paper formation, textiles, nonwovens, etc. and 2) evaluate swelling and other techniques for lowering the energy requirements for MFC/Nanocellulose production.[4] ITT closed the Rayonier Whippany Labs in 1983–84 and further work on making a dry powder form of MFC was done by Herric at the Rayonier labs in Shelton, Washington, USA[2]

The field was later taken up in Japan in the mid 1990s by the group of Taniguchi and co-workers and later by Yano and co-workers.[5] and a host of major companies (see numerous U.S. patents issued to P&G, J&J, 3M, McNeil, etc. using U.S. patent search under inventor name Turbak search base). Today, there are still extensive research and development efforts around the world in this field.

Nanocellulose/MFC can be prepared from any cellulose source material, but woodpulp is normally used. The nanocellulose fibrils are isolated from the wood-based fibers using high-pressure homogenizers. The homogenizers are used to delaminate the cell walls of the fibers and liberating the nanosized fibrils. This production route is normally connected to high energy consumptions associated with the fiber delamination. Values over 30 MWh/tonne are not uncommon. Pre-treatments are sometimes used to address this problem. Examples of such pre-treatments are enzymatic/mechanical pre-treatment[6] and introduction of charged groups e.g. through carboxymethylation[7] or TEMPO-mediated oxidation. It has been shown that energy consumption can be heavily decreased using these pre-treatments and Lindström and Ankerfors has reported values below 1 MWh/tonne.[8] Cellulose nanowhiskers, a more crystalline form of nanocellulose, is formed by the acid hydrolysis of native cellulose fibers using a concentrated inorganic salt, commonly sulfuric or hydrochloric acid. The amorphous sections of native cellulose are hydrolysed and after careful timing, the crystalline sections can be retrieved from the acid solution by centrifugation and washing. Cellulose nanowhiskers are rodlike highly crystalline particles (relative crystallinity index above 75%) with a rectangular cross section. Its dimensions depend on the native cellulose source material, and hydrolysis time and temperature. 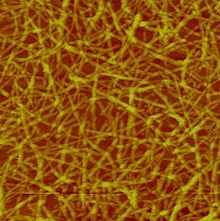 Although a combination of microscopic techniques with image analysis can provide information on nanocellulose fibril widths, it is more difficult to determine nanocellulose fibril lengths because of entanglements and difficulties in identifying both ends of individual nanofibrils. It is often reported that nanocellulose suspensions are not homogeneous and that they consist of cellulose nanofibers and nanofiber bundles.

Most methods have typically been applied to investigation of dried nanocellulose dimensions, although a study was conducted where the size and size-distribution of enzymatically pre-treated nanocellulose fibrils in a suspension was studied using cryo-TEM. The fibrils were found to be rather mono-dispersed mostly with a diameter of ca. 5 nm although occasionally thicker fibril bundles were present.[6] It should be noted that, some newly published results indicated that by combining ultrasonication with an "oxidation pretreatment", cellulose microfibrils with a lateral dimension that belows 1 nm is observed by AFM. The lower end of the thickness dimension is around 0.4 nm, which is believed to be the thickness of a cellulose monolayer sheet.[10]

The aggregate widths can be determined by CP/MAS NMR developed by Innventia AB, Sweden, which also has been demonstrated to work for nanocellulose (enzymatic pre-treatment). An average width of 17 nm has been measured with the NMR-method, which corresponds well with SEM and TEM. Using TEM, values of 15 nm have been reported for nanocellulose from carboxymethylated pulp. However, also thinner fibrils can also be detected. Wågberg et al. reported fibril widths of 5–15 nm for a nanocellulose with a charge density of about 0.5 meq./g.[7] The group of Isogai reported fibril widths of 3–5 nm for TEMPO-oxidized cellulose having a charge density of 1.5 meq./g.[11]

Nanocellulose gels are also highly shear thinning (the viscosity is lost upon introduction of the shear forces). The shear-thinning behaviour is, of course, particularly useful in a range of different coating applications.[6]

It has long been known that crystalline cellulose has interesting mechanical properties for use in material applications. The stiffness of crystalline cellulose has been shown to be in the order of 140–220 GPa, which is in the same size order as for instance Kevlar and is better than, for example, glass fibers, both fibers are used commercially to reinforce plastics. Films made from nanocellulose have been shown to have high strength (over 200 MPa), high stiffness (around 20 GPa) and high strain (12 %).

In semi-crystalline polymers, the crystalline regions are considered to be gas impermeable. Due to relatively high crystallinity,[12] in combination with the ability of the nanofibers to form a dense network held together by strong inter-fibrillar bonds (high cohesive energy density), it has been suggested that nanocellulose might act as a barrier material.[11][14][15] Although the number of reported oxygen permeability values are limited, reports attribute high oxygen barrier properties to nanocellulose films. One study reported an oxygen permeability of 0.0006 (cm³ µm)/(m² day kPa) for a ca. 5 µm thin nanocellulose film at 23 °C and 0 % RH.[14] In a related study, a more than 700-fold decrease in oxygen permeability of a polylactide (PLA) film when an nanocellulose layer was added to the PLA surface was reported.[11]

Nanocellulose can also be used to make aerogels/foams, either by itself or in composite formulations. Nanocellulose-based foams are being studied for packaging applications in order to replace polystyrene-based foams. Svagan et al. showed that nanocellulose has the ability to reinforce starch foams by using a freeze-drying technique.[21] The advantage of using nanocellulose instead of wood-based pulp fibers is that the nanofibrills can reinforce the thin cells in the starch foam. Moreover, it is possible to prepare pure nanocellulose aerogels applying various freeze-drying and super critical CO2 drying techniques. Aerogels and foams can be used as porous templates, potentially useful in various nanoapplications.[22][23] Tough ultra-high porosity foams prepared from cellulose I nanofibrill suspensions were studied by Sehaquiet al. A wide range of mechanical properties including compression was obtained by controlling density and nanofibrill interaction in the foams.[24] Cellulose nanowhiskers could also be made to gel in water under low power sonication giving rise to aerogels with the highest reported surface area (>600m2/g) and lowest shrinkage during drying (6.5%) for cellulose aerogels.[23] In another study by Aulin et al.,[25] the formation of structured porous aerogels of nanocellulose by freeze-drying was demonstrated. The density and surface texture of the aerogels was be tuned by selecting the concentration of the nanocellulose dispersions before freeze-drying. Chemical vapour deposition of a fluorinated silane was used to uniformly coat the aerogel to tune their wetting properties towards non-polar liquids/oils. The authors demonstrated that it is possible to switch the wettability behaviour of the cellulose surfaces between super-wetting and super-repellent, using different scales of roughness and porosity created by the freeze-drying technique and change of concentration of the nanocellulose dispersion. Structured porous cellulose foams can however also be obtained by utilizing the freeze-drying technique on cellulose generated by Gluconobacter strains of bacteria, which bio-synthesize open porous networks of cellulose fibers with relatively large amounts of nanofibrills dispersed inside. Olsson et al.[26] demonstrated that these networks can be further impregnated with metalhydroxide/oxide precursors, which can readily be transformed into grafted magnetic nanoparticles along the cellulose nanofibers. The magnetic cellulose foam may allow for a number of novel applications of nanocellulose and the first remotely actuated magnetic super sponges absorbing 1 gram of water within a 60 mg cellulose aerogel foam were reported. Notably, these highly porous foams (>98% air) can be compressed into strong magnetic nanopapers, which may find use as functional membranes in various applications.

The properties of nanocellulose (e.g. mechanical properties, film-forming properties, viscosity etc.) makes it an interesting material for many applications.

The potential of nanocellulose applications in the area of paper and paperboard manufacture is obvious. Nanocelluloses are expected to enhance the fiber-fiber bond strength and, hence, have a strong reinforcement effect on paper materials. Nanocellulose may be useful as a barrier in grease-proof type of papers and as a wet-end additive to enhance retention, dry and wet strength in commodity type of paper and board products.

As described above the properties of the nanocellulose makes an interesting material for reinforcing plastics. Nanocellulose has been reported to improve the mechanical properties of e.g. thermosetting resins, starch-based matrixes, soy protein, rubber latex, poly(lactide). The composite applications may be for use as coatings and films, paints, foams, packaging.

Nanocellulose can be used as a low calorie replacement for today’s carbohydrate additives used as thickeners, flavour carriers and suspension stabilizers in a wide variety of food products and is useful for producing fillings, crushes, chips, wafers, soups, gravies, puddings etc. The food applications were early recognised as a highly interesting application field for nanocellulose due to the rheological behaviour of the nanocellulose gel.

Different applications in this field include:

Apart from the numerous applications in the area of food additives, the general area of emulsion and dispersion applications in other fields has also got some attention. Oil in water applications were early recognized. The area of non-settling suspensions for pumping sand, coal as well as paints and drilling muds was also explored by the early investigators.

The use of nanocellulose in cosmetics and pharmaceuticals was also early recognized. A wide range of high-end applications have been suggested: