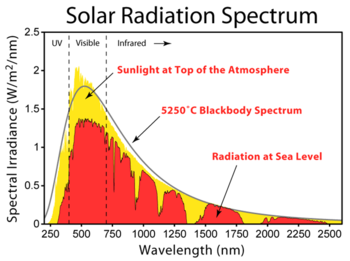 A nantenna (nanoantenna) is a nanoscopic rectifying antenna. Nantennas may prove useful for converting solar radiation to electricity, an idea first proposed by Robert L. Bailey in 1972.[1] As of June 2011, nantenna devices are not yet commercially available, and it is unknown if they will ever be as cost-effective as photovoltaic cells.

Robert Bailey, along with James C. Fletcher, received a patent in 1973 for an “electromagnetic wave converter”.[4] The patented device was similar to modern day nantenna devices. Alvin M. Marks received a patent in 1984 for a device explicitly stating the use of sub-micron antennas for the direct conversion of light power to electrical power.[5] Marks’s device showed substantial improvements in efficiency over Bailey’s device.[6] In 1996, Guang H. Lin was the first to report resonant light absorption by a fabricated nanostructure and rectification of light with frequencies in the visible range.[6] In 2002, ITN Energy Systems, Inc. published a report on their work on optical antennas coupled with high frequency diodes. ITN set out to build a nantenna array with single digit efficiency. Although they were unsuccessful, the issues associated with building a high efficiency nantenna were better understood.[3] Research on nantennas is ongoing.

The theory behind nantennas is essentially the same for rectifying antennas. Incident light on the antenna causes electrons in the antenna to move back and forth at the same frequency as the incoming light. This is caused by the oscillating electric field of the incoming electromagnetic wave. The movement of electrons is an alternating current in the antenna circuit. To convert this into direct current, the AC must be rectified, which is typically done with some kind of diode. The resulting DC current can then be used to power an external load. The resonant frequency of antennas (frequency which results in lowest impedance and thus highest efficiency) scales linearly with the physical dimensions of the antenna according to simple microwave antenna theory.[3] The wavelengths in the solar spectrum range from approximately 0.3-2.0 μm.[3] Thus, in order for a rectifying antenna to be an efficient electromagnetic collector in the solar spectrum, it needs to be on the order of hundreds of nm in size. 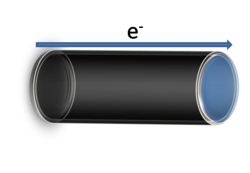 Figure 3. Image showing the skin effect at high frequencies. The dark region, at the surface, indicates electron flow where the lighter region (interior) indicates little to no electron flow.

Because of simplifications used in typical rectifying antenna theory, there are several complications that arise when discussing nantennas. At frequencies above infrared, almost all of the current is carried near the surface of the wire which reduces the effective cross sectional area of the wire, leading to an increase in resistance. This effect is also known as the “skin effect”. From a purely device perspective, the I-V characteristics would appear to no longer be ohmic, even though Ohm’s law is still valid.[citation needed]

Another complication of scaling down is that diodes used in larger scale rectennas cannot operate at THz frequencies without large loss in power.[2] The large loss in power is a result of the junction capacitance (also known as parasitic capacitance) found in p-n junction diodes and Schottky diodes, which can only operate effectively at frequencies less than 5 THz.[3] The ideal wavelengths of 0.4–1.6 μm correspond to frequencies of approximately 190–750 THz, which is much larger than the capabilities of typical diodes. Therefore, alternative diodes need to be used for efficient power conversion. In current nantenna devices, metal-insulator-metal (MIM) tunneling diodes are used. Unlike Schottky diodes, MIM diodes are not affected by parasitic capacitances because they work on the basis of electron tunneling. Because of this, MIM diodes have been shown to operate effectively at frequencies around 150 THz.[3]

One of the biggest claimed advantages of nantennas is their high theoretical efficiency. When compared to the theoretical efficiency of single junction solar cells (30%), nantennas appear to have a significant advantage. However, the two efficiencies are calculated using different assumptions. The assumptions involved in the nantenna calculation are based on the application of the Carnot efficiency of solar collectors. The Carnot efficiency, η, is given by

where Tcold is the temperature of the cooler body and Thot is the temperature of the warmer body. In order for there to be an efficient energy conversion, the temperature difference between the two bodies must be significant. R. L. Bailey claims that nantennas are not limited by Carnot efficiency, whereas photovoltaics are. However, he does not provide any argument for this claim. Furthermore, when the same assumptions used to obtain the 85% theoretical efficiency for nantennas are applied to single junction solar cells, the theoretical efficiency of single junction solar cells is also greater than 85%.

Limitations and disadvantages of nantennas

As previously stated, one of the major limitations of nantennas is the frequency at which they operate. The high frequency of light in the ideal range of wavelengths makes the use of typical Schottky diodes impractical. Although MIM diodes show promising features for use in nantennas, more advances are necessary to operate efficiently at higher frequencies.

Another disadvantage is that current nantennas are produced using electron beam (e-beam) lithography. This process is slow and relatively expensive because parallel processing is not possible with e-beam lithography. Typically, e-beam lithography is only used for research purposes when extremely fine resolutions are needed for minimum feature size (typically, on the order of nanometers). However, photolithographic techniques have advanced to where it is possible to have minimum feature sizes on the order of tens of nanometers, making it possible to produce nantennas by means of photolithography.

After the proof of concept was completed, laboratory-scale silicon wafers were fabricated using standard semiconductor integrated circuit fabrication techniques. E-beam lithography was used to fabricate the arrays of loop antenna metallic structures. The nantenna consists of three main parts: the ground plane, the optical resonance cavity, and the antenna. The antenna absorbs the electromagnetic wave, the ground plane acts to reflect the light back towards the antenna, and the optical resonance cavity bends and concentrates the light back towards the antenna via the ground plane.

Idaho National Labs used the following steps to fabricate their nantenna arrays. A metallic ground plane was deposited on a bare silicon wafer, followed by a sputter deposited amorphous silicon layer. The depth of the deposited layer was about a quarter of a wavelength. A thin manganese film along with a gold frequency selective surface (to filter wanted frequency) was deposited to act as the antenna. Resist was applied and patterned via electron beam lithography. The gold film was selectively etched and the resist was removed.

In moving up to a greater production scale, laboratory processing steps such as the use of e-beam lithography are slow and expensive. Therefore a roll-to-roll manufacturing method was devised using a new manufacturing technique based on a master pattern. This master pattern in effect mechanically “stamps” the precision pattern onto an inexpensive flexible substrate and thereby creates the metallic loop elements seen in the laboratory processing steps. The master template fabricated by Idaho National Laboratories consists of approximately 10 billion antenna elements on an 8-inch round silicon wafer. Using this semi-automated process, Idaho National Labs has produced a number of 4-inch square coupons. These coupons were combined to form a broad flexible sheet of nantenna arrays.

The proof of principle for nantennas started out with a 1 cm2 silicon substrate with the printed nantenna array filling the area. The device was tested using infrared light with a range of 3 to 15 microns. The peak emissivity is found to be centered at 6.5 microns and reaches an emissivity of 1. An emissivity of 1 means the nantenna absorbs all of the photons of a specific wavelength (in this case, 6.5 microns) that are incident upon the device.[7] Comparing the experimental spectrum to the modeled spectrum, the experimental results are in agreement with theoretical expectations (Figure 5). In some areas, the nantenna had a lower emissivity than the theoretical expectations, but in other areas, namely at around 3.5 microns, the device absorbed more light than expected. 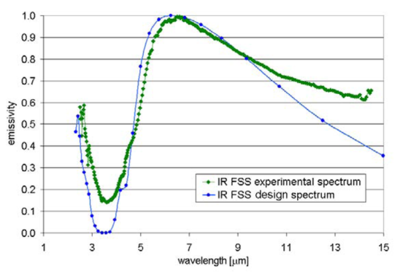 Figure 5. Experimental and theoretical emissivity as a function of wavelength. The experimental spectrum was determined by heating the nantenna to 200°C and comparing the spectral radiance to blackbody emission at 200°C.

After a proof of concept on a stiff silicon substrate, the experiment was replicated on a flexible polymer-based substrate. The target wavelength for the flexible substrate was set to 10 microns. Initial tests show that the nantenna design can be translated to a polymer substrate, but further experiments are needed to fully optimize the characteristics.

Nantennas are cheaper than photovoltaics. While materials and processing of photovoltaics are dear (currently the cost for complete photovoltaic modules is in the order of $40 per square foot and declining.[8]), Steven Novack estimates the current cost of the nantenna material itself as around fifty cents to one dollar per square foot.[9] With proper processing techniques and different material selection, he estimates that the overall cost of processing, once properly scaled up, will not cost much more. His prototype was a one foot by two foot sheet of plastic, which contained only 60 cents of gold, with the possibility of downgrading to a material such as aluminum, copper, or silver.[10] The prototype used a silicon substrate due to familiar processing techniques, but any substrate could theoretically be used as long as the ground plane material adheres properly.

In an interview on National Public Radio's Talk of the Nation, Dr. Novak claimed that nantennas could one day be used to power cars, charge cell phones, and even cool homes. Novak claims the last of these will work by both absorbing the infrared heat available in the room and producing electricity which could be used to further cool the room.

Currently, the largest problem is not with the antenna device, but with the rectifier. As previously stated, present-day diodes are unable to efficiently rectify at frequencies which correspond to high-infrared and visible light. Therefore, a rectifier must be designed that can properly turn the absorbed light into usable energy. Researchers currently hope to create a rectifier which can convert around 50% of the antenna's absorption into energy.[9] Another focus of research will be how to properly upscale the process to mass-market production. New materials will need to be chosen and tested that will easily comply with a roll-to-roll manufacturing process.