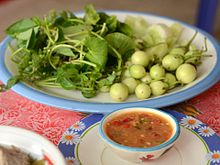 Nam phrik kapi in the foreground 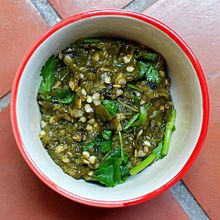 Nam phrik (Thai: น้ำพริก), generally pronounced "Nam phik", is a generic term that may refer to any of the types of more or less thick spicy, often chili based, hot sauces typical of Thai cuisine. The main ingredients of Nam phrik are fresh or dry chilies, garlic, shallots, fish sauce, lime juice and/or some kind of fish or shrimp paste. In the traditional way of preparing the sauce, the ingredients are pounded together in a mortar. Salt is added to taste.

Nam phrik is normally served on very small plates placed by the main dish as a condiment or dip for bland preparations, like raw or boiled greens, fish, poultry and meats. Depending from the type, the region and the family that prepares it Nam phrik may vary in texture from a liquid to a paste and to an almost dry, granulous or powdery consistence.

There are many different variants of Nam phrik, according to the ingredients, the preparation and the region. Some may include tamarind, green mango, galangal, lemongrass and/or mushrooms. The fish paste may be made in a variety of ways, by mincing dried, boiled or salted fish, fish roe, or may be replaced by tomato and minced pork. In Isan Pla ra, giving an intense flavor, is often used. Some types of Nam phrik may be sweetened with sugar. Among the most widespread varieties, the following deserve mention: