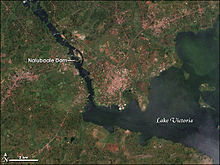 Satellite image showing the location of the dam in relation to Lake Victoria.

Construction of the Owen Falls Dam in early 1950s

Nalubaale Power Station, often known by its old name, Owen Falls Dam, is a hydroelectric power station across the White Nile near to its source at Lake Victoria in Uganda. Nalubaale is the Luganda name for Lake Victoria.

In 1947, Sir Charles Redvers Westlake (an English engineer) reported to the Colonial Government of Uganda recommending the construction of a hydroelectric dam at Owen Falls near the city of Jinja, which in turn led to the establishment of the Uganda Electricity Board (UEB), with Westlake as its first chairman. The dam was completed in 1954, submerging Ripon Falls. It supplies electricity to Uganda and parts of neighbouring Kenya and Tanzania. Maintenance and availability of the station declined seriously during the government of Idi Amin.

Before that, water levels on Lake Victoria were moderated by a natural rock dam on the north side of the lake. Rising lake waters would spill over the natural dam into the White Nile, which flowed through Uganda, Sudan, and Egypt before emptying into the Mediterranean Sea. When water levels dropped too low, flow into the river ceased. When the current dam was built, a treaty between Uganda and Egypt ensured that the natural flow of the Nile would not be altered by the dam.

The rating of the Nalubaale power station is 180 megawatts (MW). Originally it was designed for ten turbines rated at 15 MW each (giving a total of 150 MW). The station was refurbished in the 1980s to repair the accumulated wear from a decade of civil disorder. During the repairs, the output power of the generators was increased.

In 1993 work started on the Owen Falls Extension project, a second powerhouse located about 1 km from the 1954 powerhouse. A new power canal was cut to bring water from Lake Victoria to the new powerhouse. Major construction was completed in 1999 with first power from the project from two units in 2000. The extension has space for five hydroelectric turbine generators with three installed as of 2003. Each unit at the extension has a capacity of 40 megawatts. During official opening ceremonies in 2003, the extension was named the Kiyira Power Station. Design and project management of the extension project was by Acres International (now Hatch Ltd), Canada.

Operators of Nalubaale Power Station must regularly clear water hyacinth from the intakes of the stations. Further hydroelectric development in Uganda is controversial because at least one technically feasible site (Bujagali Hydroelectric Power Station) is of great cultural importance.

Since January 2006, hydroelectric generation at Nalubaale and Kiira stations has been curtailed due to a prolonged drought and low level of water in Lake Victoria. The hydrology of Lake Victoria has unusual features.[1] But the lack of rainfall may not be the only reason water levels fell. Environmental groups and some Ugandan water officials told the media[citation needed] that the power company operating the dam on the White Nile may have pushed too much water through to meet rising demands for electricity. Because 30 million people rely on Lake Victoria for fishing, transport, electricity, and tourism, the drop in water levels had a big impact on the region.

In 2006 there was a release of secret documents from 1956 in Britain that indicated the British had considered using this dam to reduce the water in the Nile in an effort to remove Egyptian President Nasser. The plan was not carried out because it would have greatly damaged some allies such as Kenya and Uganda, and the effect of shutting off the Nile's source would not have affected Egypt for at least 16 months.[2]