Nainital Lake, a natural freshwater body, situated amidst the township of Nainital in Uttarakhand State of India, tectonic in origin, is kidney shaped or crescent shaped and has an outfall at the southeastern end.[1][2]

Nainital Lake, in the Nainital district called the Lake District of India, is one of the four Lakes of Kumaon hills; the other three lakes are the Sattal Lake, the Bhimtal Lake and the Naukuchiyatal Lake.[3]

There are two legends of the creation of Nainital Lake.[4][5]

The first legend is recorded in the chapter ‘manas khand’ of the ‘Skanda Purana’ in which it states that the Nainital Lake was known as ‘Tri-Rishi-Sarovar’, meaning the lake of the three sages. The three sages Atri, Pulastya and Pulaha, (three of the Saptarshis), seven great sages-of the first Manvantara, the Hindu progenitor of mankind) while on their repentant pilgrimage chanced to be in Naintal, and not finding water to drink, burrowed into the ground at the present day location of the lake and did tapas (meditation) there, which it is believed resulted in filling up of the burrowed hole with subterranean water drawn from the sacred Mansarovar Lake in Tibet.[4] Hence, the folk lore belief is that a dip in this lake is meritorious.

The second legend pertains to Nainital, which is one of the 64 'Shakti Peethas' (holy places of cosmic power) in India. The story goes that when Lord Shiva in his grief on the death of his consort sati's or Dākshāyani (a Hindu goddess of marital felicity and longevity who was the first wife of Shiva) carried her half charred dead body all over the earth, the left eye fell at Nainital and thus emerged the compound name Nainital (a word formed by naina and tal meaning 'eye' and 'lake' respectively), the sanctified home of the Goddess Naina Devi. It is claimed that the lake is also in emerald eye shape. As a Shkathisthal, the temple of Naina Devi is located at the northern end of the lake.[4]

The nearest railhead on broad gauze line of North East Railways is at Kathgodam 35 km (22 mi) away from the lake and connects to Delhi, Dehradun and Howrah It is connected by National Highway No. to Delhi, Agra, Dehradun, Haridwar, Lucknow, Kanpur & Bareilly daily. The nearest airport is 70 km (43 mi) away.[6]

Historical records confirm that in 1839, Mr. P. Barron, from Rosa, an English business man in sugar trade, on a hunting expedition accidentally coming across the lake at Nainital was so captivated that he decided to build a European Colony on shores of the lake. The news magazine, the Englishman Calcutta, reported in 1841 discovery of this lake near Almora.[4]

The lake is bounded by the high and steep Naina peak on the North West side, by the Tiffin Top to the south west side and snow view peaks on the north. Coniferous forest trees cover these hill ranges. The annual rainfall in the basin area of the lake is reported to be 1294.5 mm (43.15 inches). Tropical monsoon climate with maximum temperature 24.6°C and minimum of 0.5°C are recorded. The water is reported to be alkaline in nature (ph value of 8.4–9.3).[2]

The lake receives flows from the surrounding catchment basin which comprises the hill slopes and springs. The hydrologic studies related to water balance and sedimentation was done using radioisotopes for estimating/measuring the various components of the inflow and outflow into the lake. Studies indicated that the subsurface inflow and outflow were significant – ranging from 43 to 63% and 41 to 54 %, respectively, of the total inflow and outflow, except in years of exceptionally heavy rainfall. The components of outflows were the surface outflow, the subsurface outflow through the springs on the downstream side and draft through wells for meeting the water supply of Nainital town and evaporation loss from the lake surface. The mean water retention time for the lake was computed as 1.16 years for the mean annual rainfall.[1]

The Krol group of rocks, comprising slates, marls, sandstones, limestones and dolomites with a few small dykes intrusives, is the dominant geological formation of the lake’s surroundings. The lake is deduced to have been formed tectonically. Balia Nala, which is the main stream feeding the lake is along a fault line and the subsequent streams align parallel to major joints and faults. 26 major drains feed the lake including the 3 perennial drains. The lake catchment has highly folded and faulted rocks due to poly phase deformation. Landslides are a frequent occurrence in the hill slopes surrounding the lake, which are steep. The slopes are highly vulnerable to landslides and mass movement due to various geological and human factors. Several landslides have occurred in the past (pictured) around the lake. Many settlements around the lake are located in landslide areas.[1]

While the Nainital district where the lake is situated (in the middle Himalayan ranges up to 2,000 m (6,600 ft), a temperate zone), is rich in flora (typical temperate climate plants) and fauna, the details of the flora and fauna specific to the lake and its surroundings recorded are the following.[7]

Several species of medicinal flora and horticulture plants have also been reported.

The fishes found in the lake are generally carps Mahseer, (the Hindi name of mahāsir, mahāser, or mahāsaulā used for a number of fishes of the group), also hill trout and the mirror carp which breed several times during one spawning season during May to September. Two species of Mahaseer fish viz., Tor tor: The red finned mahseer and the Tor putitora: The yellow finned mahseer, a food fish which grows to varying sizes from 20 to 60 Cms (7.87 to 23.62 inches) are reported. The three species of Hill Trout found in the lake are the Schizothorax sinuatus, Schizothorax richardsoni and Schizothorax plagiostornus. The imported fish bred in the lake is Mirror carp or Cyprinus carpio.[7] Gambusia affinis also called Mosquitofish have been introduced in the lake as a biocontrol measure to control Mosquito larvae.[7]

A scientific study indicates that the open drains feeding the lake introduce toxic substances from the catchment of the lake, particularly heavy metals which get adsorbed onto the suspended sediments, which in turn settle down in the bottom of the lake. A study of the risk assessment code has revealed that 4–13% of manganese, 4–8% of copper, 17–24% of nickel, 3–5% of chromium, 13–26% of lead, 14–23% of cadmium and 2–3% of zinc exist in exchangeable fraction which puts the lake under the low to medium risk category and infers that it could enter into food chain and also cause deleterious effects to aquatic life. This study provides the basic database to formulate guidelines for the dredging operations and/or restoration programmes in the lake.[8]

The water quality studies carried out by the National Institute of Hydrology during 1999–2001 on physico-chemical parameters (pH, temperature profile, Secchi’s transparency, dissolved oxygen, BOD, COD and nutrients), biological profile (density of population, biomass and species diversity of phyto, zooplankton and macrobenthos) and bacteriological characteristics have led to the conclusion that long-term limnological changes have occurred in the lake. Excess of nutrients inflow have contributed to the eutrophic conditions and the internal recycling of nutrients from sediments during water circulation has resulted in luxurious growth of phytoplankton. The lake is thus anoxic and has reduced hypolimnion, winter circulation, large phytoplankton and relatively lower animal population.[1]

Threats to the lake

The problems facing the lake which were also listed in the plea in a Public Interest Litigation (PIL) before the Supreme Court of India in 1995 seeking court directive for redress measures could be summarised as below:[1]

The National Institute of Hydrology (NIH) of Roorkee who prepared a plan for the restoration of the lake, at an estimated cost of Rs 50 crore (about US $ 10 million), sponsored by the Ministry of Environment and Forests, Government of India, are also now guiding the restoration measures.[10] The Conservation and Management Plan evolved by NIH is not only lake centric but also proposes to tackle the immediate periphery of the lake which contributes an adverse impact on the lake. The “Nainital Jheel Parikshetra Vishesh Kshetra Vikas Pradhikaran”, the Lake Development Authority notified under U.P. Special Area Development Act 1986 is a Special Purpose Vehicle (SPV) set up for implementing the restoration works.[1] The restoration works that have been implemented or are in different stages of implementation are the following: 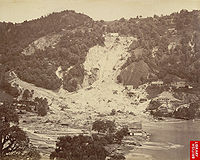 The Honourable Supreme Court of India in its judgment of 1995, in response to the Public Interest Litigation, gave the following recommendations which have also been addressed in the restoration measures mentioned above.[1][9]

(i)Sewage water has to be prevented at any cost from entering the lake; (ii) So far as the drains which ultimately fall in the lake are concerned, it has to be seen that building materials are not allowed to be heaped on the drains to prevent siltation of the lake;(iii) Care has been taken to see that horse dung does not reach the lake. If for this purpose the horse stand has to be shifted somewhere, the same would be done. The authorities would examine whether trotting of horses around the lake is also required to be prevented;(iv) Multi-storeyed group housing and commercial complexes have to be banned in the town area of Naini Tal. Building of small residential houses on flat areas could, however, be permitted;(v) The offence of illegal felling of trees is required to be made cognizable.(vi) Vehicular traffic on the Mall has to be reduced. Heavy vehicles may not be permitted to ply on Mall;(vii) The fragile nature of Ballia Ravine has to be taken care of. The cracks in the revetment of Ballia Nullah have to be repaired urgently.

In the “India Today” magazine, Prasanta Rajan, a journalist, in a preamble to the particular interest shown by the Lady District Magistrate of Nainital in restoration works of the lake has very vividly described the lake in these words:

Look for the lake through the colonial windows of Pant House, a vintage English bungalow on the hilltop, now submerged in wintry night, solitary with a kind of Wuthering Heights mystery. Down below, the lake is a laminated stillness, protected by seven never-sleeping hills. In the dead darkness of Kumaon, this magnificence is a distant, partially lit vision, less than real, as the hills of frozen memories make the lake a footnote in water.

There is the Nainital Boat Club that offers yachting facilities at the lake. The Annual Kingfisher Yachting Competition (Regatta) is held here in the third week of June.[11] The Kumaon festival which brings out the local cultures and traditions is organized every year during the winter months of October and November, by the Tourism Department.[11]