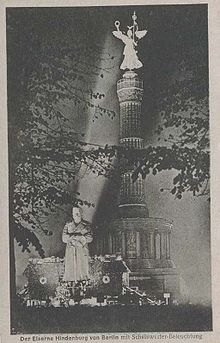 Statue of Hindenburg in front of the Victory Column in Berlin, 1919 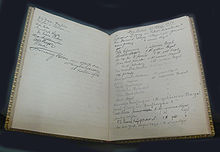 Nail Men or Men of Nails (German: Nagelmänner) were a form of propaganda and fundraising for members of the armed forces and their dependents in the Austro-Hungarian Empire and the German Empire in World War I. They consisted of wooden statues (usually of knights in armour) into which nails were driven, either iron (black), or coloured silver or gold, in exchange for donations of different amounts. Some took different forms, including pillars, shields or local coats of arms and crosses, especially the Iron Cross, and in German there are a variety of alternate names for them, including Wehrmann in Eisen or eiserner Wehrmann (Iron Guardian), Nagelfigur, Nagelbild or Nagelbrett (Nail Figure or Nail-Bed), Wehrschild (Defence Shield) and Kriegswahrzeichen (War Monument). The most famous were the original Wehrmann in Eisen in Vienna and the 'Iron Hindenburg', a 12 metre (42 foot) statue of Hindenburg adjacent to the Victory Column in Berlin. 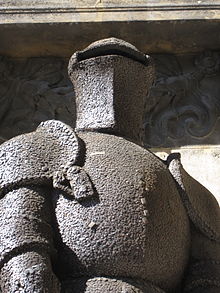 Close-up of the Vienna Wehrmann im Eisen showing the nails

The idea for the Nail Men came from the Stock im Eisen in Vienna, a tree-trunk which had had nails hammered into it for centuries. The first Nail Man, a medieval knight, was set up in Vienna and first nailed on 6 March 1915.[1] They were promoted as a patriotic fund-raising method in German-speaking parts of the Austro-Hungarian Empire and also in the German Empire, including by publications such as Gotthold Riegelmann's Der Stock in Eisen: praktische Ratschläge zur Errichtung einfacher Nagelholzmale mit Ideenskizzen und Kostenberechnungen (The Stock im Eisen: practical advice on the erection of simple wooden monuments for nailing with sketched ideas and cost calculations)[2] and Benno Fitzke and Paul Matzdorf's Eiserne Kreuz-Nagelungen zum Besten der Kriegshilfe und zur Schaffung von Kriegswahrzeichen (Iron cross nailings for the best benefit of war aid and for the creation of war monuments).[3] They have been seen as "fit[ting] in much more closely with Protestant celebrations of the Prussian military genius and the grandeur of the Kaiserreich" than with Austrian Catholicism.[4]

Municipalities and charitable organisations, either specially founded associations or the Red Cross, had a statue or other emblem made out of wood (oak was sometimes recommended), sometimes by well known sculptors, such as the medieval knight Wehrmann in Eisen by M. Molitar in Leipzig.[5][6] The nails which the donor could use depending on the level of the donation could be iron, or silver- or gold-plated. The placement of the nail also reflected the level of the donation.[5] For example, in the case of the Iron Cross at Heidelberg, a black (iron) nail cost 1 mark, a silver nail hammered into the border, 3 marks, a nail in the '1914' inscription, 5 marks, in the 'W' for Kaiser Wilhelm, 10 marks, and in the crown at the top of the cross, 20 marks;[7] in the case of the 'Iron Siegfried' at Wiesbaden, iron nails cost 1 mark, silver-coated, 5–20 marks, and gilded up to 300 marks, with further donations possible;[8] in the case of the Hindenburg statue in Berlin, gold nails cost 100 marks, silver and black cost 5 marks, and grey 1 mark; for donations over 500 marks, a small plaque was nailed to the sword.[9] Donations were often recorded in an 'Iron Book', for example at Heidelberg, and the donor often received a lapel pin, a certificate, or some other token of the donation. Medallions, postcards and other associated merchandise were sold as a further source of funds.[5]

An iron cross was a popular choice of form, perhaps the most popular;[10] it was specifically recommended by Fitzke and Matzdorf, who state that it would require 160–200 nails.[11] Other common shapes were shields and coats of arms, but animals, flowers and ships (including U-Boats) were also nailed. The figures in human form typically were knights in armour but sometimes depicted modern soldiers or historical and legendary figures. In addition to Hindenburg, Admiral Tirpitz, Rupprecht, Crown Prince of Bavaria and General Otto von Emmich were depicted as Nail Men.[12]

Donations were usually collected to assist the wounded or for widows and orphans of the fallen.[5][13] But in some cases, for example at Schwäbisch Gmünd, they were intended to help supply front soldiers; in the winter of 1916, the need was particularly great.[14] The statues were usually prominently displayed and there was considerable social pressure to show patriotism by buying nails.[15] The first nail was generally ceremonially driven by an important personage at a large patriotic ceremony including hymns and specially written patriotic poems which often evoked the Age of Chivalry; Fitzke and Matzdorf provide a suggested ceremony in 24 parts.[4] Clubs, school classes, and so on performed group nailing; there were even nailings at the front.[16]

Other locations in modern Austria 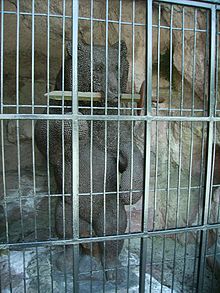 The Berndorf Nail Bear in his cage 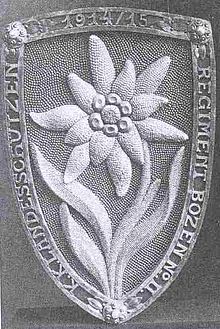 The Iron Edelweiss of Enns

now in the Czech Republic 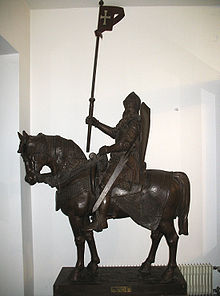 The mounted crusader of St. Ulrich in Gröden 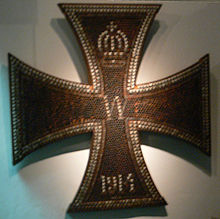 Iron Cross in the museum in Erfurt

Iron Henry the Lion in Brunswick

Other locations in modern Germany 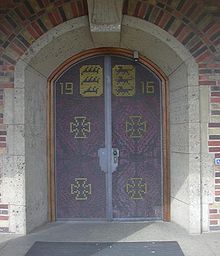 Door of the Kornwestheim town hall

The Iron Roland of Mannheim 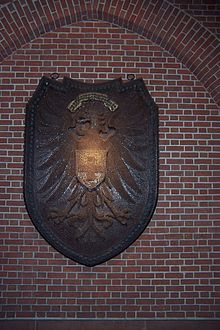 German-Americans and Austrian-Americans also collected money by means of Nail Men, until the entry of the US into the war on the Allied side.

In York, Pennsylvania, the same fundraising method was used with the opposite meaning: people paid 10 cents to drive a nail into the head of a statue of the kaiser with a red, white and blue handled hammer.[77][78]