Nag (Sanskrit: नाग, Nāg "Cobra") is a Fourth generation "Fire-and-forget" anti-tank missile developed in India. It is one of five missile systems developed by the Defence Research and Development Organisation (DRDO) under the Integrated Guided Missile Development Program (IGMDP). Nag has been developed at a cost of

As originally conceived, the Nag would have been available with three different types of guidance, These included a wire guided version, an infra-red version and a millimetric wave (mmW) version. DRDO failed to develop a wire guidance system had this led to plans for this being dropped. Currently, guidance is based on an imaging infra-red (IIR) passive seeker that ensures a high-hit accuracy in both top- and front-attack modes.

The mmW seeker, on the other hand, is intended to operate as an optional system that can replace the IIR passive seeker as a module. Also incorporated into the guidance system, is a CCD camera. The advantage of this optical seeker is that it is less prone to jamming. The missile has a weight of 42 kg and can engage targets at ranges 4–5 km. The Nag is claimed to be first anti-tank missile which has a complete fiberglass structure.

Another advantage of the missile is property of the propellant. Most missiles leave a plume as the missile heads toward the target. This makes it harder for the firer to remain hidden. In the Nag, however, the plume is visible only during the first one second of flight, as the missile's booster imparts 90% of the velocity, following which, a sustainer maintains the missile's speed, burning a smokeless propellant that is almost invisible.

The Nag has a flight speed of 230 metres per second, is armed with a 8 kg tandem shaped-charge warhead, has a rocket motor using nitramine-based smokeless extruded double base sustainer propellant, has a single-shot hit probability of 0.77 and a CEP of 0.9 metres, and has a 10-year maintenance-free shelf-life.Recently,it was tested from Shamirpet in hyderabad on June 13, 2010.

The Nag will be produced in two main basic variants. The land version has been tested from a tracked vehicle known as NAMICA (Nag Missile Carrier). With the IR version of the missile, targets are acquired using a thermal sight, and are then assigned to the nose-mounted IIR seeker.

Nag will be configured to be used on the Advanced Light Helicopter(ALH) and the HAL Light Combat Helicopter(LCH). This version will be known as HELINA (HELIcopter NAg). Eight missiles are carried in two quadruple launchers. Launchers mounted on either side are linked to a nose-mounted stabilized thermal sight and a laser range-finder package.

The NAMICA version of the missile is a 'lock-on before launch' system. This is where the target is identified and designated before the missile is launched. As the targeting system is based on visual identification, the range is limited. The HELINA version on the other hand will use a 'lock-on after launch' system extending its range to 7 km. In this scenario, the missile is launched in the general direction of the target. As it approaches the target, images of the area ahead are sent back to the operator who will be able to identify enemy tanks. The command to lock on to a tank is then passed onto the seeker through an uplink mid-flight. After that, the missile homes in onto the target and destroys it.[1] 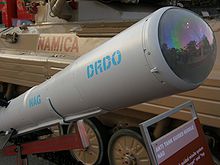 A closeup of the Nag missile head, with the Imaging Infrared (IIR) Seeker

In addition to basic land and helicopter variants the DRDO is now developing number of advanced variants of the Nag missile:

NAMICA (Nag Missile Carrier)is a tank destroyer built for the army. It is equipped with a thermal imager for target acquisition. NAMICA is a modified BMP-2 ICV produced as "Sarath" in India. The carrier weights 14.5 tonnes in full combat load and is capable of moving 7 km/h in water. The carriers are capable of carrying 12 missiles with 8 in ready-to-fire mode. The NAMICA carrier was put through transportation trials covering 155 km during summer trials.[5]

Nag was last test fired as part of user validation trials on July 16, 2010 and will be inducted into the Indian army. [6]

Nag was successfully test fired for the second day in a row on August 8, 2008 from the Test Range at Pokhran, Rajastan, marking the completion of the developmental tests. The DRDO and Indian Army plan to hold the user trial shortly.[7] These trials will be the final trials to decide the induction of the missiles.[8] The NAMICA carrier successfully completed its amphibious trials in the Indira Gandhi Canal at Rajastan on August 8, 2008.[9]

The Indian Army has placed an order of 443 Nag missiles and 13 Namicas for introduction in the next 3 years.[2] Nag will be the first weapon of such kind that will be inducted into the army by November–December 2009. The Army urgently needs the more advanced Nag to improve kill probability as the missile using a high explosive warhead to penetrate the armor in modern tanks.[7]

As part of the winter trial of the final user trials the Nag missile was tested successfully by the Indian Army on December 26, 2008. Before the induction of the missile into service and the summer trials will be carried out in June 2009.[10]

During the winter trials the Nag missile zeroed in on the precise location of the target tank at a distance of 3.3 km, as required by the Indian Army. The Indian Army is also extremely satisfied with the performance of the warhead of the missile.[11] The test conducted on 28 December 2008 was successfully completed by the Indian Army. During the test a moving target at 1.8 km was targeted in the top attack mode and a stationary target at a distance of 3.1 km. The two targets were completely destroyed.[12] A total of five missiles were fired during day and night against stationary and moving targets. Summer trials were completed in the summer of 2009.[13]

In July 2009 the Nag anti-tank guided missile (ATGM) was cleared for production.[14] The production of the Nag missile was ordered after successful summer trials were carried out in the Rajasthan desert.

The trials of the missile were conducted using an advanced imaging infrared seeker head, as per Army's requirements. On 20 January 2010, field tests of the Nag’s Thermal Sight system saw the system identify and lock on to a T-55 tank at a range of 5 km. The tank was then engaged and destroyed at a range of over 4 km [12] thus the missile’s fire-and-forget capability has been established using the day version of the IIR passive seeker.In its IIR form the Nag has limited all weather capability. This has given added impetus to develop the mmW seeker. Efforts are on to provide special embedded on-board hunters, that can hunt for targets using ‘day seekers’ and ‘day-&-night seekers’. During trials in June 2010, the short range capability of the missile to hit targets was validated. Nag missile hit a target at a range of half a kilometers in just 3 seconds.[15] In the follow on test a moving target was hit within 3.2 seconds after launch.[16] The final user trials were held during July 2010 and successfully completed. The missile has been cleared for mass production. Bharat dynamics plans to produce 100 missiles per year. The Nag missile will replace the second generation anti-tank missiles in Army armoury.[17]

The Nag will replace the existing Russian Konkours and European missile Milan, both of which are manufactured under license by Bharat Dynamics Limited. An Indian official said a country in the Middle East had shown keen interest in Nag anti-tank guided missiles during Abu Dhabi Defence Expo-2009.

Nag has successfully completed its final validation trials and is expected to join the Indian Army in 2011.Two missiles were launched against a moving target at a time another two missiles were launched against a stationary Vijayanta tank in quick succession and successfully hit the targets.Indian Army is happy with the performance and is expected to buy 443 missiles for

The project suffered a delay of one year due to army changing its requirements with the carrier of the missile (NaMiCa) at the last moment.[19]

The final test of the missile with certain modifications to launch pad and the target settings with respect to range, are to be carried out at Pokhran field firing range.[20]