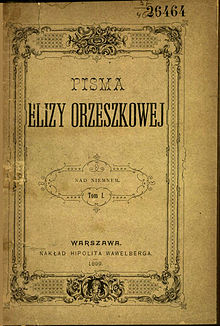 Nad Niemnem is a Positivist novel written by Eliza Orzeszkowa in 1888 during the foreign Partitions of Poland.[1] Its main purpose was to present the Polish society and its own internal dynamics as they were in mid–18th century, in reference to the Polish January Uprising against the Russian occupation.[2] The novel first appeared in installments on the pages of Tygodnik Ilustrowany in 1887 and was published as a book in 1888.

First the author planned to limit the plot to a love story between Jan, a villager from the lower classes, and Justyna, who comes from a wealthy aristocratic family. However, while writing, the background relating to customs started to develop which made the author give up the original title: Misalliance.

Nad Niemnem is set in and around the Polish county of Grodno after the 1863 January Uprising. The title means "Upon the Niemen" - the Niemen being a river now situated in modern Byelorussia and Lithuania.

Motifs appearing in the novel