The Cabinet of New Zealand (in Māori: Te Rūnanga o te Kāwanatanga o Aotearoa) functions as the policy and decision-making body of the executive branch within the New Zealand government system. The Prime Minister and many Ministers of the Crown serve as members of the Cabinet.

All Cabinet ministers also serve as members of the Executive Council, which "advises" the Governor-General.

No legislative act established the Cabinet: rather, it exists purely by constitutional convention. This convention carries sufficient weight for many official declarations and regulations to refer to the Cabinet, and a government department exists with responsibility for supporting it (the Department of the Prime Minister and Cabinet). Although Cabinet lacks any direct legislative framework for its existence, the Cabinet Manual has become the official document which governs its functions, and on which its convention rests.

The structure of Cabinet has as its basis the formal institution known as the Executive Council. Most Ministers hold membership of both bodies, but some Executive Councillors – known as "ministers outside Cabinet" – do not have Cabinet positions.

The lack of formal legislation establishing Cabinet leaves the powers of its members only loosely defined. However, convention regarding the Cabinet's authority has considerable force, and generally proves strong enough to bind its participants. Theoretically, each minister operates independently, having received a ministerial warrant over a certain field from the Crown (represented by the Governor-General). But the Governor-General can dismiss a minister at any time, conventionally on the advice of the Prime Minister, so ministers are largely obliged to work within a certain framework.

Cabinet itself acts as the accepted forum for establishing this framework. Ministers will jointly discuss the policy which the government as a whole will pursue, and ministers who do not exercise their respective powers in a manner compatible with Cabinet's decision risk losing those powers. This has become known as the doctrine of collective responsibility. Problems arise when the Prime Minister breaches collective responsibility. Since ministerial appointments and dismissals are in practice in the hands of the Prime Minister, the Cabinet can not directly initiate any action against a Prime Minister who openly disagrees with his government's policy. On the other hand, a Prime Minister who tries to act against concerted opposition from his Cabinet risks losing the confidence of his party colleagues. An example is former Prime Minister David Lange, who publicly spoke against a tax reform package which was sponsored by then-Finance Minister Roger Douglas and supported by Cabinet. Lange dismissed Douglas, but when the Cabinet supported Douglas against Lange, Lange himself resigned as Prime Minister.

Styles of address of members 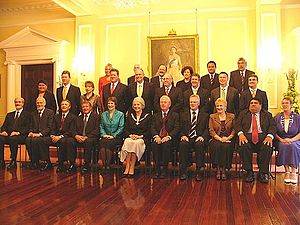 The Ministers of the Fifth Labour Government in 2005, with then Governor-General Dame Silvia Cartwright, 20 October 2005.

A Cabinet Committee comprises a subset of the larger Cabinet, consisting of a number of ministers who have responsibility in related areas of policy. Cabinet Committees go into considerably more detail than can be achieved at regular Cabinet meetings, discussing issues which do not need the input of ministers holding unrelated portfolios.

Cabinet Committees will often discuss matters referred to them by Cabinet itself, and then report back the results of their deliberation. This can sometimes become a powerful tool for advancing certain policies, as was demonstrated in the Lange government. Roger Douglas, Minister of Finance, and his allies succeeded in dominating the finance committee, enabling them to determine what it recommended to Cabinet. The official recommendation of the finance committee was much harder for his opponents to fight than his individual claims in Cabinet would be. Douglas was able to pass measures that, had Cabinet deliberated on them itself rather than pass them to Committee, would have been defeated.

Other Cabinet Committees may emerge on a temporary basis, with the purpose of investigating an issue of relevance at the time.

Members and other ministers

The tables below list New Zealand's cabinet ministers and ministers outside Cabinet.

Ministers outside Cabinet from other parties with confidence and supply agreements