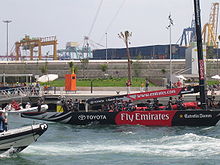 NZL-92 returning to port in Valencia, Spain for the 32nd America's Cup

NZL-92 (pronounced "EN-ZED-EL Ninety-Two", except in American English) is an International America's Cup Class racing boat sailed by Emirates Team New Zealand that won the Louis Vuitton Cup 2007 but was beaten in the 2007 America's Cup by the defender Alinghi team sailing SUI-100.

In 2004, Emirates Team New Zealand head Grant Dalton revamped the Team New Zealand program. Following the unfortunate defeat of a design-led campaign in 2003 which was mainly due to deficiences in the boat, Dalton saw the need for a combination of a sailor-led campaign with a 'good all round boat' as seen in the 2003 America's Cup winner Alinghi's SUI-64. Two new yachts were designed and built relatively quickly and were assigned the sail numbers NZL 84 and NZL 92 respectively. The two new Team NZ yachts were among the first of their generation to be built. NZL 84 debuted in Louis Vuitton Act 10, and beat Alinghi in Act 12.

Initially considered unattractive, the unique full bow on both NZL-92 and NZL-84 are quickly appearing to set a new evolution of yacht design and style in the 32nd America's Cup. This is reflected on the comments of race commentator and Cup organizer Bruno Trouble remarked, 'ugly boats quickly become attractive once they start winning races!'

When compared with NZL-82 and NZL-81, and most of the 31st America's Cup edition boats which have a very flat double-knuckle bow, with exception of both Alinghi's SUI-64 and BMW Oracle Racing's USA-71.

Both the benchmark in aesthetics and speed with some of the other 10 Challengers mimicking its design, particularly in the bow. This can be seen especially on Areva-Challenge and CHINATeam, FRA-93 and CHA-95 respectively.